Natural gas prices at the Waha pricing point in West Texas continue to offer an attractive long-term option for offtakers, according to an analysis from the U.S. Energy Information Administration (EIA). 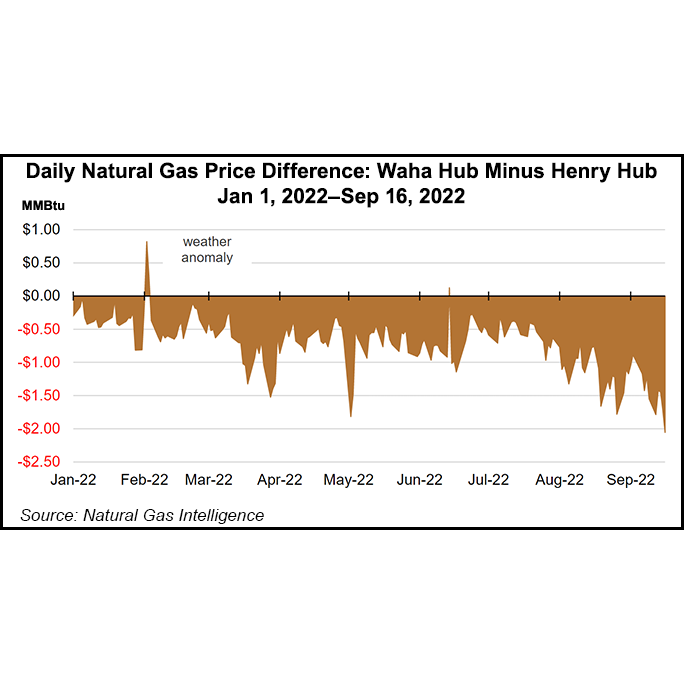 Since late 2021, the difference “has been widening” between the natural gas price at Waha and the Henry Hub benchmark in Louisiana, researchers said.

The Permian, which feeds the Waha trading hub, is the second largest gas producing region in the United States after Appalachia and is growing. East Daily Capital is forecasting 4.6 Bcf/d of U.S. gas supply growth by the end of 2023, led by associated gas out of the Permian.

Natural gas production in the Permian more than doubled in the past five years and reached a high of 16.7 Bcf/d in 2021, according to the EIA. Once strained by infrastructure deficits, since April 2022, additional pipeline projects out of the Permian have been announced that would expand pipeline takeaway capacity by approximately 4.2 Bcf/d by the end of 2024.

Mexico’s access to the Waha natural gas hub has been bolstered thanks to new infrastructure. This includes Grupo Carso’s 472 MMcf/d Samalayuca-Sásabe pipeline and Fermaca’s Waha-to-Guadalajara, aka Wahalajara, system. Wahalajara allows molecules from the Permian to reach Guadalajara, Mexico’s’ second-most populous city and a major industrial center.

West Texas flows into Mexico were 700 MMcf/d on Tuesday, according to NGI calculations. Overall West Texas imports in Mexico rose by 12% during the first five months of the year versus the same span in 2021, according to EIA research.

In May, West Texas exports into Mexico averaged a record high of 1.6 Bcf/d, researchers said previously.

Energy expert Rosanety Barrios tweeted that Waha prices were “brutally attractive” for Mexico. While the difference is less pronounced, Waha also trades at a discount to Houston Ship Channel, a major pricing point in Mexico.

She said Mexico “is the only country in the world that has two pipelines coming out of Waha, and that’s not by accident, but the result of careful planning and profound market knowledge.”

She warned however that state utility Comisión Federal de Electricidad (CFE), the anchor shipper on the nation’s private pipelines, needed to properly manage capacity on the pipelines in order for the opportunity to be seized.

The western coast of Mexico is also home to up to four separate planned LNG export projects that would use gas sourced from the United States, principally from the Permian.

NGI’s director of strategy and research, Patrick Rau, said that the Wahalajara system and other infrastructure could support the three additional planned projects too.

“ECA is already under construction, and because the other three are mid-sized projects rather than big hulking ones like Sabine Pass and Corpus Cristi, I think they have a much better shot at reaching a final investment decision,” Rau said. “Maybe not all three of those non-ECA projects, but all three is a possibility.”