The Pennsylvania Public Utility Commission (PUC) has received requests from citizens, oil and gas companies and local officials to review the drilling ordinances of three of the five localities in southwestern Pennsylvania that have filed a legal challenge to Act 13, the state’s omnibus Marcellus Shale law. 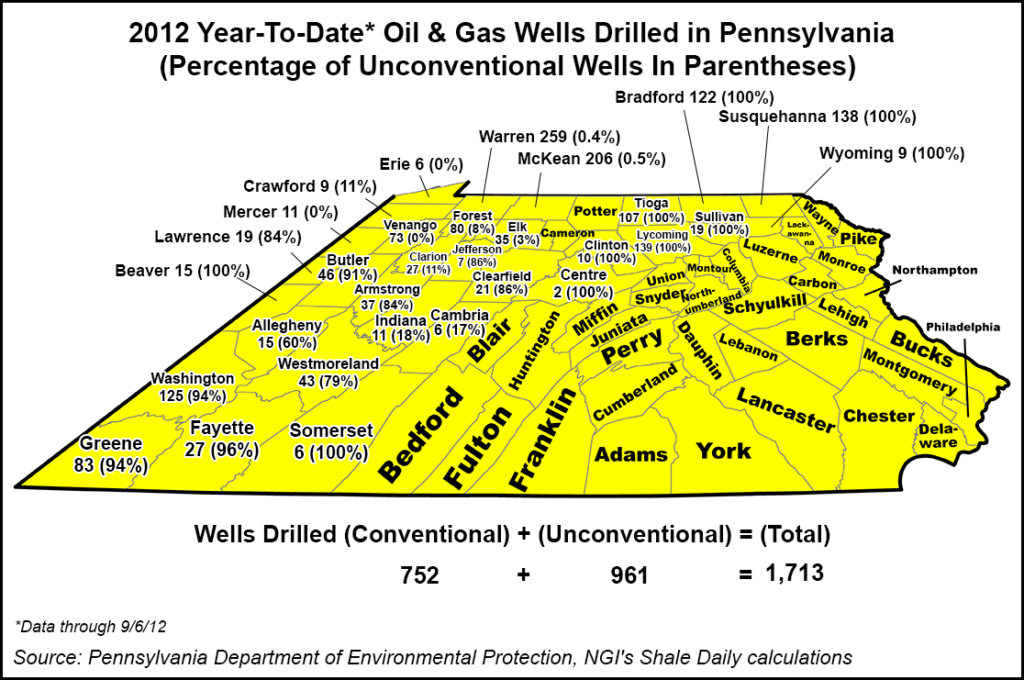 According to PUC records, the commission has received requests for review (RFR) for local ordinances drawn up by three communities: Cecil and Mt. Pleasant Townships in Washington County, and South Fayette Township in Allegheny County. The PUC has also received a request for an advisory opinion (RAO) from Washington Township, which is in Fayette County.

“If it’s an advisory opinion from us, those are just that,” PUC spokeswoman Jennifer Kocher told NGI’s Shale Daily on Tuesday. “They are advisory in nature and would have no impact on their ability to receive impact fee monies. But under the law, an [RFR] can be filed by either a resident or a producer within that municipality. If the [RFR] goes against the ordinance, then they are not eligible to receive [revenue from the impact fee].”

Scott Roy, a Range Resources Corp. vice president, filed an RFR over South Fayette’s ordinance on Aug. 30. “The zoning ordinance, when viewed in its totality, is a blatant attempt by the township to superimpose itself as the primary regulatory authority for oil and gas operations,” Roy said in the filing. “The aggregate impact of certain provisions of the zoning ordinance, particularly those dealing with distance limitations, results in a total ban on oil and gas operations in the township.”

Alan Rank, a landowner in Cecil Township, filed a similar RFR on Sept. 7. “As a landowner residing in Cecil Township, I believe that enforcement of the current municipal ordinance has and will prevent the development of oil and gas from taking place,” Rank said. “Continued enforcement of this ordinance is only the latest in a trend of anti-industry behavior displayed by the township’s officials.

“Even though much of the oil and gas industry has established Cecil Township as their home base of operations, injected millions of dollars into the local economy and brought thousands of jobs into the area, the township has repeatedly acted in a hostile manner toward any oil and gas development taking place within the boundaries of the township.”

Mt. Pleasant Township residents Tony and Sally Pawlosky voiced similar concerns about their municipality in an RFR received by the PUC on Sept. 8. “We believe that continued enforcement of the current municipal ordinance has prevented and will continue to prevent the development of oil and gas from occurring,” the Pawloskys said.

Arnold Dull, chairman of the Washington Township Supervisors, filed an RAO with the PUC on Sept. 7. Officials in North Towanda Township, which is in Bradford County, and Fayette County have made similar RAOs (see Shale Daily, Sept. 10).

Act 13, which was signed into law by Gov. Tom Corbett in February, amended Title 58 (oil and gas) of the Pennsylvania Consolidated Statutes and empowered the PUC to collect the fee on behalf of local governments (see Shale Daily, Feb. 15). The law gives Pennsylvania’s counties the choice to collect an annual per-well fee from operators. The fee is set annually based on the price of gas and declines over 15 years but is set at $50,000 for all unconventional horizontal gas wells drilled through 2011.

The revenue from the program is split between state and local governments, with the local share split between counties and the municipalities in those counties. The act states that only counties and municipalities that agree to be bound by the state-imposed oil and gas drilling rules could receive fee revenue. It is that latter part of the law that is being challenged.

Last week the PUC said natural gas producers had paid nearly all of the $205.9 million owed under the impact fee, an amount that exceeded expectations by about $26 million (see Shale Daily, Sept. 12b). The Pennsylvania Supreme Court is scheduled to hear oral arguments on the constitutionality of Act 13 on Oct. 17 in Pittsburgh (Robinson Township et al v. Commonwealth et al, No. 284-MD-2012) (see Shale Daily, Sept. 11).

Drilling is soaring in 2012 within Pennsylvania, both unconventionally and conventionally. According to Department of Environmental Protection figures, a total of 1,713 wells were drilled from January through August, and 961 (56%) were unconventional wells.

While 31 counties have seen drilling so far this year, Lycoming, Susquehanna, Bradford and Tioga counties in the northeastern Pennsylvania Marcellus target zone, combined with Washington and Greene counties in the southwestern Pennsylvania Marcellus target zone accounted for 73% of the 961 unconventional wells drilled during the timeframe. Those same six counties accounted for 42% of the total number of wells drilled in the state to date this year.