Natural gas producers in Pennsylvania have paid most of the $202.7 million owed under the drilling impact fee enacted under Act 13, the state’s omnibus Marcellus Shale law. 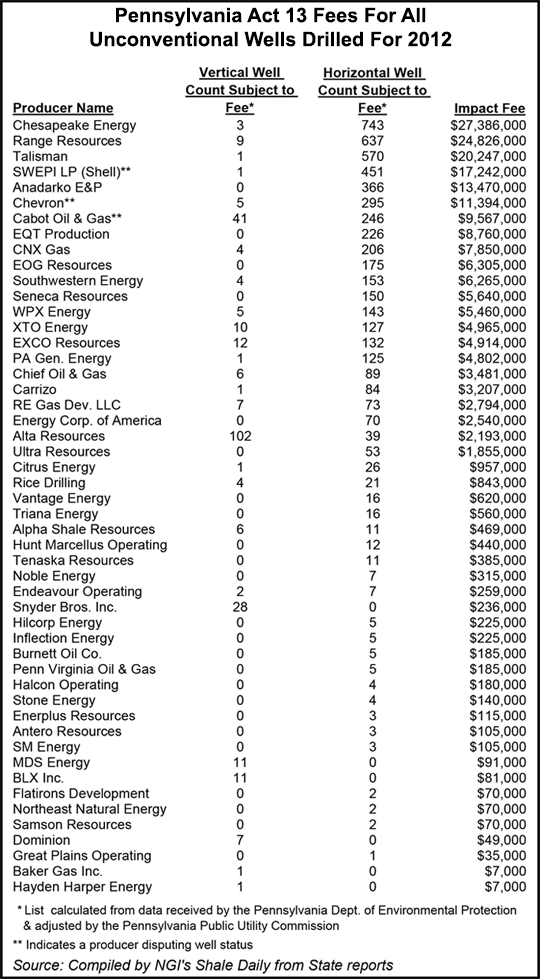 According to data from the Pennsylvania Public Utility Commission (PUC), all but three of 80 operators with impact fee bills have paid their obligations in full. Cabot Oil & Gas Corp., Chevron Appalachia LLC and SWEPI LP, a Royal Dutch Shell plc subsidiary, have paid most of their obligations.

PUC figures show that less than $20,000 remains to be collected. Spokeswoman Jennifer Kocher attributed the shortfall to disputes over the status of a handful of wells. She said the issues would probably be resolved for the following tax year.

News of how much revenue the impact fee generated for 2012 came in the wake of an Associated Press story that asserted Pennsylvania was potentially losing millions of dollars because the state had implemented an impact fee, not a severance tax. Patrick Henderson, energy adviser to Gov. Tom Corbett, told NGI’s Shale Daily on Monday that he strongly disagreed with the assertion.

“The premise of their article is that gas production in Pennsylvania is through the roof, and yet impact fee revenue being collected is stagnant,” Henderson said. “They don’t actually cite any states that are taxing production of gas. The states that they cite actually tax the value of the gas, and there is a huge difference between the two.”

Henderson added that before Gov. Tom Corbett took office in 2011, there had been nearly four years of debate over whether to implement a severance tax or an impact fee, “but there was never enough collective support to get something done. The impact fee, love it or hate it, we got it done. The impact fee was politically acceptable, it got done, it’s being collected and real dollars are in municipalities’ bank accounts.”

Michael Wood, research director with the Pennsylvania Budget and Policy Center, told NGI’s Shale Daily on Monday that he doesn’t dispute that the impact fee was born from a political middle ground. “It was a political compromise based on what the governor what willing to sign and what they could get through the legislature. The issue for us, going forward, is how that compares with what a traditional severance tax would raise.

The impact “fee” was conceived as an end-around to gain support from Republicans, who, in line with the conservative Tea Party, steadfastly refused to consider any new taxes (see Shale Daily, Feb. 8, 2012). Campaigning for office in 2010 Corbett said he would not support a severance tax.

Last September, the PUC reported that producers had paid about $206 million in impact fees for unconventional wells drilled through 2011, an amount much higher than the $180 million that had been estimated (see Shale Daily, Sept. 12, 2012; April 30, 2012).

Act 13, which was signed into law by Corbett in February 2012, amended Title 58 (oil and gas) of the Pennsylvania Consolidated Statutes and empowered the PUC to collect the fee on behalf of local governments (see Shale Daily, Feb. 15, 2012). The law gives counties the choice to collect an annual per-well fee from operators. The fee is set annually based on the price of gas, and declines over 15 years but is set at $50,000 for all unconventional gas wells drilled through 2011. The revenue from the program is split between state and local governments, with the local share split between counties and the municipalities in those counties.