Pennsylvania’s Department of Environmental Protection (DEP) on Monday concluded a 16-month investigation by announcing that high levels of methane found in three water wells in Franklin Township in Susquehanna County “cannot be attributed to natural gas drilling activity in that geographical area.” 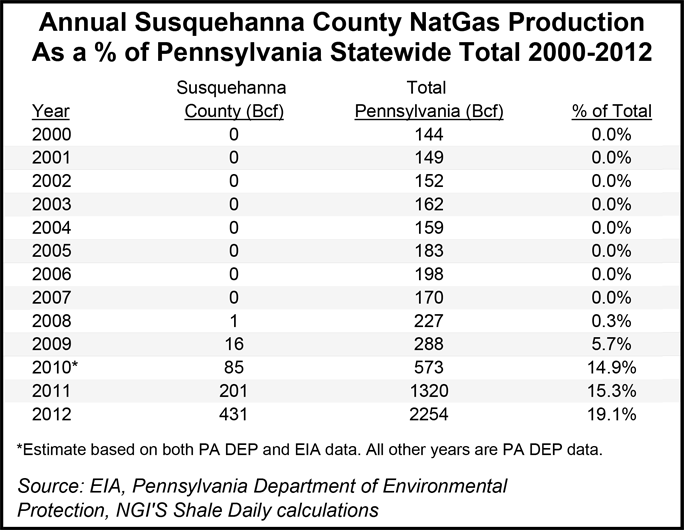 The investigation, which began in December 2011, included evaluations of the nearest natural gas wells, isotopic testing and analysis of historical water data to determine the origin of the methane, DEP said. Also included in the testing were water samples taken from a spring and private water well at nearby Salt Springs State Park, which historically contains naturally occurring methane.

“DEP’s testing also determined that the gas in the water samples taken from the private water wells was not of the same origin as the natural gas in the nearby gas wells.”

WPX Energy Inc. came to much the same conclusion almost a year ago when it determined through isotopic testing that contaminated drinking water wells in Susquehanna County were fouled by naturally occurring methane and not by Marcellus Shale drilling (see Shale Daily, May 11, 2012). At that time, Tulsa-based WPX, which had one well more than 4,000 feet away from the private water wells and another more than a mile and half away, submitted its test results to DEP.

DEP said an evaluation of information from a nearby mobile home park public water supply file relating to the abandonment of a water source in 1998, due to elevated levels of methane, chlorides and TDS, found similar water chemistry to that of the three residential water supplies.