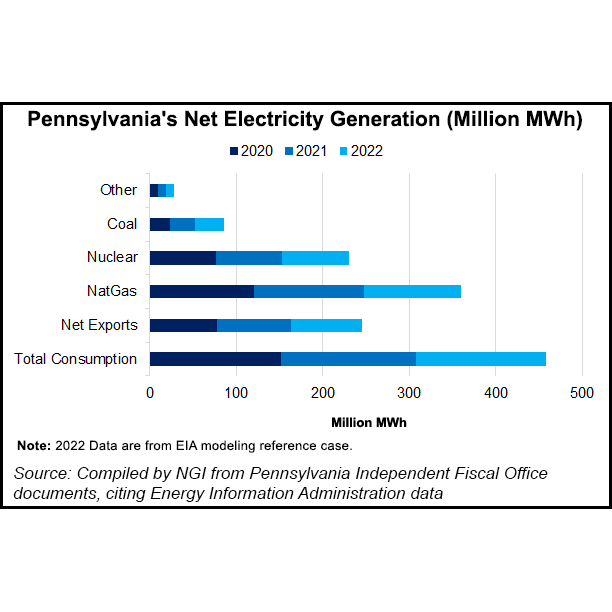 DEP and the state’s Environmental Quality Board (EQB) filed an appeal with the Pennsylvania Supreme Court this week after the lower Commonwealth Court granted a preliminary injunction on the CO2 Budget Trading Program, DEP communications director Neil Shader told NGI.

The mandate, aka Regulation 7-559, would add Pennsylvania to the Regional Greenhouse Gas Initiative (RGGI), a cap-and-trade program among Northeast and Mid-Atlantic states that is designed to curb power sector emissions.

“Because they are government defendants, DEP/EQB’s appeal acts as an automatic” stay of the injunction at least for now, the Pennsylvania Coal Alliance’s (PCA) executive director Rachel Gleason told NGI.

The appeal basically lifted the injunction. Market participants in the PJM Interconnection power grid could include RGGI emissions costs in their cost-based offers “unless and until the injunction is reinstated, if at all,” Monitoring Analytics LLC said in a recent memo.

A cost-based offer “is an offer to sell electricity based on the cost of production, including tariffs and ongoing maintenance costs,” said NGI’s Shaylon Stolk, senior energy analyst.

The program had taken effect on July 1, when DEP required power plants to “start accounting for their CO2 emissions,” but the injunction put that obligation on hold.

The CO2 allowance price would be set through quarterly auctions, and Pennsylvania’s involvement would expand the size of the cap-and-trade program by about 40%, said regulators,

A DEP model from last year assumed allowance prices of $3.57/ton for 2022 that would generate $207 million for the state, said Knittel. He pointed out, however, that the market clearing prices for the December and March RGGI auctions were $13/ton and $13.50/ton, respectively. A $13.50/ton CO2 emissions price would translate into $781 million in revenue for the state in 2022.

RGGI reported in June that its most recent quarterly auction clearing price was $13.90/ton.

PCA, part of the PA Jobs Alliance coalition of business and labor interests, cheered the injunction.

Power generators, coal producers and organized labor have fought the CO2 rule and Pennsylvania’s entry into RGGI. They argued that Democratic Gov. Tom Wolf’s executive order to implement the rule amounted to an unconstitutional tax enacted without legislative approval.

“Under our constitution, the power of taxation is vested solely in the General Assembly,” Pennsylvania Manufacturers Association CEO David N. Taylor said. “Governor Wolf’s RGGI scheme is not an administrative ‘fee’ to cover the program’s operating expenses but rather an unconstitutional tax…The RGGI electricity tax is unconstitutional, therefore the RGGI program should not go into effect.”

Republican State Sen. Gene Yaw, who chairs the Environmental Resources and Energy Committee, said “the court made the right choice” to pause RGGI implementation. Yaw also expressed optimism that “we will succeed on the merits of the case” despite DEP’s appeal.

“We need to pursue climate solutions that encourage collaboration with our energy sector, not regressive and unconstitutional taxes…”

The regulation “threatens to significantly increase energy prices at a time of high inflation, while also pushing more economic activity to states on our grid who are not in RGGI,” Bernstein said. “Businesses and families are already facing high energy prices due to a lack of supply and infrastructure, and this is an opportunity for policymakers to embrace abundant domestic energy production, facilitate building new infrastructure, support competitive markets and set long-term policies that encourage innovation.”

RGGI “has been in place in neighboring states for a number of years, and several studies have been conducted to evaluate its impact – both as to achieving a reduction in electricity generated from conventional fuel sources and as to the economics of power generation,” Crowell & Moring LLP attorney Lisa Henneberry, Washington, DC-based Energy Practice partner, told NGI.

She said that RGGI and similar programs are designed so that they “seek to establish a framework that both ensures a stable supply of electricity at reasonable prices” and curbs GHG emissions.

Emissions trading programs aim to provide “a meaningful incentive for the operation and further development of renewable electricity sources and, as a consequence, ultimately lowering the commodity cost…of electricity” for fuels such as natural gas and coal.

“The challenge lies in the short to medium term, when there is not sufficient renewable generation available,” she said.

Based on how allowances are distributed and whether they are allocated back to consumers, “an additional CO2 cap and trade system could have the near-term effect of increasing electricity costs as generators pass through those costs to consumers and such costs are not set off by allowance fees,” said Henneberry.

Given the current “high gas price environment…the combination of those two factors potentially could make RGGI particularly unappealing to consumers – though may be a critical tool in reaching the ultimate goal,” she said.