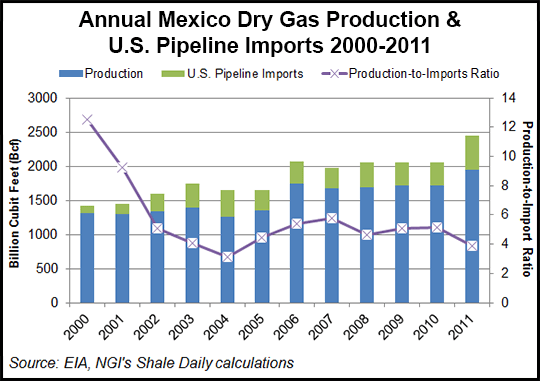 Guillermo Dominguez, a member of the National Hydrocarbons Commission, said the company is also looking into security issues at several facilities, which have adversely affected natural gas production.

According to a Dow Jones report, Dominguez told attendees of the Mexican Petroleum Congress on Tuesday that Pemex intends to perform seismic testing in the portion of the Eagle Ford Shale that extends into Mexico, as well as in the Tampico-Misantla region on the Gulf Coast.

“If we’re on the sidelines of this [shale gas] business for now, then it’s better that we import it,” Dominguez said, adding that shale gas development in Mexico will take five to eight years.

Pemex is considered to be the eighth-largest oil company by production in the world but its oil and gas output has been slipping in recent years. In 2011 it recorded total sales of around US$100 billion. Crude oil production in 2004 reached 3.4 million b/d on average, but it fell to about 2.5 million b/d in 2011. Proven and probable reserves also have declined from a combined 31.5 billion boe in 2007 to just above 26 billion in 2011.

Pemex began producing its first natural gas from shale in February 2011 after drilling a test well, Emergente 1, into the Sabinas-Burro Picachos formation of the Eagle Ford (see Shale Daily, March 25, 2011). The well is in the Hidalgo 1 exploration area, in the northern state of Coahuila. Company officials believe Sabinas-Burro Picachos, Tampico-Misantla and three other regions — Chihuahua and Burgos are in the north and Veracruz along the GOM coast — could be rich in shale gas.

Dominguez told the major national newspaper Milenio that there are wells and areas of the country where workers have restricted access due to a lack of security, which is adversely affecting production. He said the Burgos Gas Processing Complex in Reynosa in Tamaulipas was the most affected by the situation.

“I know that Pemex has security issues, mainly in Burgos, because Carlos Morales [Pemex’s director for exploration and production] has told me directly,” Dominguez said in a translated statement, adding that additional security concerns have been raised at Pemex facilities in Veracruz and Macuspana in Tabasco. “Anything that affects production is certainly an issue that needs to be addressed.”

President-elect Enrique Pena Nieto, a member of the Institutional Revolutionary Party, or PRI, is scheduled to take office on Dec. 1.