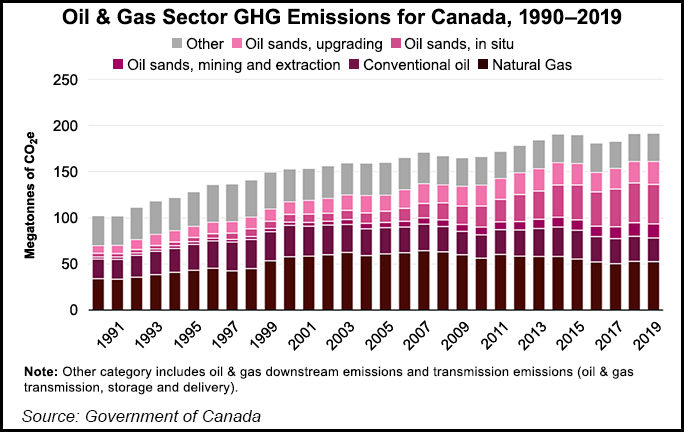 The Calgary-based pipeline companies proposed building a northern pipeline network and storage hub capable of collecting and disposing of up to 20 million tons/year of industrial exhaust that contributes to climate change.

“Ongoing innovation and partnerships are critical to the success of both industry and government in reaching our economic and environmental goals,” said Alberta Environment Minister Jason Nixon. Added Canada Natural Resources Minister Seamus O’Regan, “This is how we get to net-zero.”

ACG would connect the Fort McMurray oilsands region, the Alberta Industrial Heartland district next to Edmonton and the nearby Drayton Valley natural gas- and oil-producing region.

“Designed to be an open-access system, the ACG will serve as the backbone of Alberta’s emerging carbon capture utilization and storage (CCUS) industry,” the companies said.

The first phase of the project could begin as early as 2025, with a fully completed system by 2027.

For the emissions storage hub, the partners said permit applications have been prepared. Pembina and TC also are working with the Alberta government “to obtain support and set a path to obtain sequestration rights.”

The proposed disposal site, which would be northeast of Edmonton near Redwater, is a depleted 73-year-old oilfield. The partners rated it as capable of permanently storing more than 2 billion tons of carbon emissions underground.

“The full build-out of ACG over time represents the potential for a multibillion-dollar incremental investment,” said the companies.

The carbon emissions and storage network would be “sustained by a commercial framework consisting of long-term fee-for-service contracts plus a marketing and trading pool to facilitate carbon-dioxide and carbon offset transactions.”

Federal and provincial officials praised the ACG plan but they made no subsidy promises. The possibility for government aid to reduce emissions emerged earlier this month as five big oilsands producers set a national target of net-zero emissions by 2050.

No cost estimates were disclosed for the ACG. The proposed project is in the early planning stages ahead of feasibility studies, discussions and regulatory applications.

An early-2000s version of a carbon pipeline grid promoted by rival pipeline conglomerate Enbridge Inc. had been forecast to cost more than C$1.5 billion ($1.2 billion). Government aid was promised, but the project was shelved. A proposed carbon dioxide market, injections to extend the lives of aging wells, turned out to be too small to justify an extensive pipeline grid.

The outlook for ACG may be more positive. There are tougher environmental policies in Canada and more support, along with more fully developed carbon pricing and trading systems.