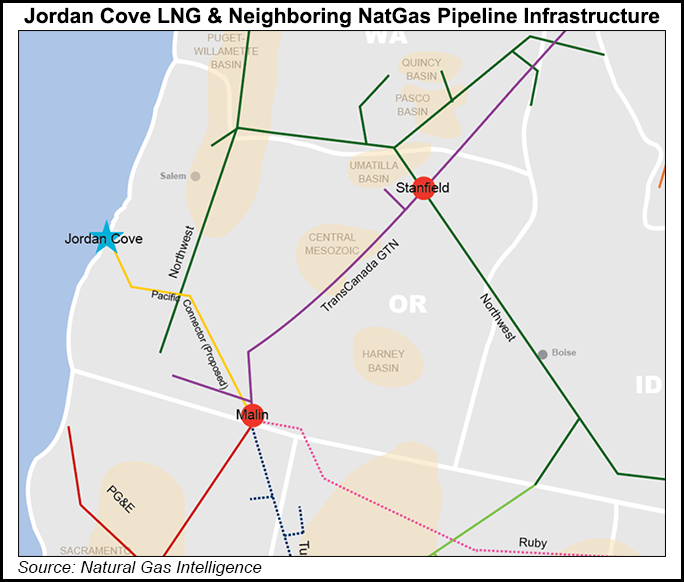 “Despite diligent and persistent efforts, Applicants have not been able to obtain the necessary state-issued permits and authorizations from various Oregon state agencies,” the company said in a filing with FERC.

Pembina asked the Federal Energy Regulatory Commission to vacate its 2020 authorizations for the export terminal and the Pacific Connector pipeline that would have supplied the facility with natural gas.

Jordan Cove has been in the works for about eight years, but it has faced staunch opposition nearly from the start. The project could not secure a water quality certification and authorizations under the Coastal Zone Management Act (CZMA) from the state, which denied them. Earlier this year, FERC declined Pembina’s petition to waive Oregon’s regulatory authority. The outlook dimmed further when the U.S. Department of Commerce sustained Oregon’s objection under the CZMA that found the project was not consistent with its coastal management plan.

Pembina had paused development in April to review its options.

“Applicants have now completed this review and have decided not to move forward with the Project,” the company said of the terminal and pipeline. “Among other considerations, Applicants remain concerned regarding their ability to obtain the necessary state permits in the immediate future in addition to other external obstacles.”

Pembina acquired the project in 2017 when it took over Veresen Inc., which initially filed an application with FERC in 2013. The first application was denied in 2016, when the Commission cited problems with the Pacific Connector and a lack of contracts from buyers. Jordan Cove was ultimately approved last year.

Jordan Cove was aiming to be the first natural gas export facility on the U.S. West Coast, which is closer to key demand centers in Asia. The terminal was designed to liquefy and export up to 1.04 Bcf/d. The company had not signed any contracts for the project, which was a major hurdle in a global market crowded with potential facilities vying to move forward.

FERC had been considering whether to stay its authorization of the terminal and pipeline after the U.S. Court of Appeals for the District of Columbia Circuit ordered a review by the end of January. Landowners and environmental groups had challenged FERC’s certificate authorization in court.

To that end, Pembina said the Commission “need not expend further resources considering the issue of the appropriateness of a stay.”