The Lower 48 oil and natural gas rig count remains sharply lower than a year ago, but fracturing activity is rising, a revival that should extend into 2021, all things (prices) being equal, Patterson-UTI Energy Inc. CEO Andy Hendricks said Thursday. 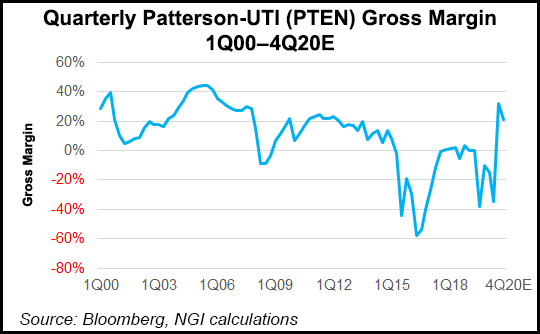 Drilling and completion activity for the Houston giant “stabilized” in the third quarter as its producer customers began finishing their DUCs, i.e. drilled but uncompleted wells. The operator ran four fracture fleets in the second quarter, added one in 3Q2020 and now plans to add one more fleet before the end of the year.

”Based on our customer engagement, we expect activity will continue to improve through at least the first quarter of 2021,” Hendricks said. “Assuming commodity prices remain around current levels, we expect our profitability will be at or near an inflection point in the fourth quarter and move higher in early 2021.”

While the North American rig count is nowhere near what it was a year ago, when it was running on average 142 rigs on U.S. land, Patterson-UTI has substantial rig contracts that pay dividends whether the equipment is in use or not.

For the final three months, “we expect that our rig count will average 61 rigs, with a lower proportion of idle but contracted rigs as customers reactivate rigs during the fourth quarter,” Hendricks told investors.

“We expect the rig count at the end of the year to be 63 rigs, of which approximately 10% will be idle but contracted.”

The company at the end of September had drilling rig term contracts in place that should provide about $305 million of future dayrate revenue, Hendricks said. “Based on contracts currently in place, we expect an average of 43 rigs operating under term contracts during the fourth quarter.”

The average rig margin was $10,170/day in the latest quarter, which included benefits from lump sum early termination revenue.

Operating rig days in the United States plunged to 5,499 from the year-ago total of 13,054. Canada drilling dried up, with zero operating days, versus 27 a year ago.

In the directional drilling business, revenue fell to $10 million, with an operating margin of $500,000. Margin as a percentage of revenue turned positive, to 5% from minus 19.5%.

The company also has gained market share from new drilling technologies introduced earlier this year, including the Mercury measurement while drilling system and the Mpact directional drilling motor sizes.

“Technology and performance will be an increasing differentiator,” Hendricks said. “We continue to move forward with remote operations capabilities for reduced costs, and automation technologies for improved performance and repeatability.

“These improvements are enabled by the high frequency data and metadata originating from the wellsite operations, as well as by digitizing our processes and workflow.”
The technology investments are “capital-light.” They operate in a “cloud data environment where, for example, in contract drilling and directional drilling, they can be added to our combined high-performance, super-spec rigs and directional systems.”
There’s also more interest in technology solutions for operators focused on carbon emission reductions and ESG (environmental, societal and governance) initiatives, Hendricks said.

“As always, we continue to focus on prudent capital stewardship and bolstering our already strong financial position,” he told investors. Liquidity improved to more than $900 million at the end of September, to $304 million cash and $600 million available under an undrawn revolver.

Natural gas-fired electric generators made up a majority of the failures identified by FERC during an inquiry into the extreme cold weather that rattled power markets in Texas and the Midwest in February. The Federal Energy Regulatory Commission, in a joint effort with the North American Electric Reliability Corp. (NERC), found freezing generator components and…