Azure Midstream Energy LLC and Marlin Midstream Partners LP have agreed to transactions that would create one of the largest gathering and processing systems in the Haynesville Shale and horizontal Cotton Valley plays in East Texas and northern Louisiana. 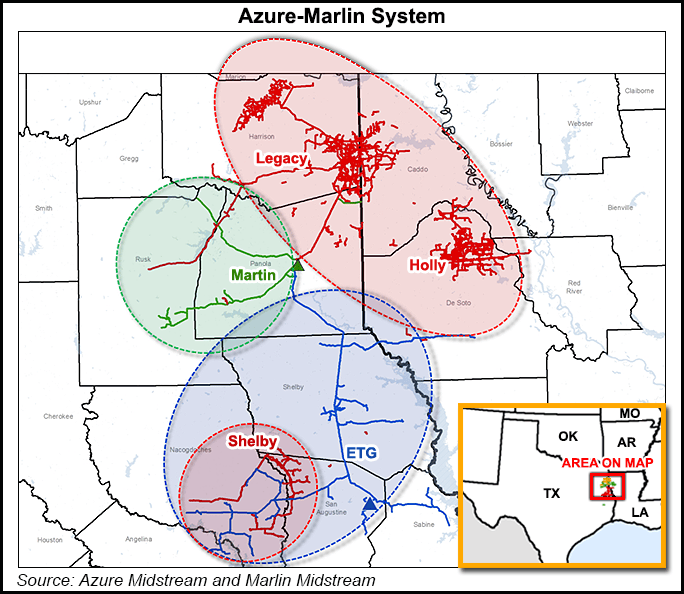 Azure, Marlin and Marlin sponsor NuDevco Midstream Development LLC struck agreements that will leave Azure owning 100% of the general partner of Marlin and 90% of the total outstanding incentive distribution rights in Marlin. Azure’s Legacy gathering system will be contributed to Marlin for $162.5 million in a dropdown. NuDevco will retain all of its 10.7 million limited partner units, or 59.2% ownership stake, in Marlin, subject to an option granted to Azure to acquire 20% of such units from NuDevco in order to align interests and incentivize unit holder value creation.

The transactions would result in a partnership with a total enterprise value of more than $500 million with visibility into future dropdowns via the new sponsorship, the companies said.

“This transaction advances Azure’s strategic objectives of becoming part of a larger, public MLP capable of providing access to growth capital for acquisitions, and further diversifies our customer base and midstream service offerings by expanding Azure with Marlin’s new and efficient processing assets within our core areas” said Azure CEO Chip Berthelot.

The companies said the combination would offer enhanced scale and diversification to allow the combined partnership to compete for greenfield development and acquisition opportunities. “The complementary services offered by Azure and Marlin are also expected to create attractive operational and financial synergies for both entities,” they said.

Azure is to retain the Center gathering system and the Holly gathering system at the general partner level for future potential dropdown into the partnership. Azure gained control of the Center system, the Holly system and the Legacy system assets through the acquisition of TGGT Holdings LLC from EXCO Resources Inc. and BG Group plc and the acquisition of an ownership interest in the East Texas Gathering system from Tenaska Capital Management LLC in November 2013 for total consideration of about $1.05 billion (see Shale Daily, Oct. 17, 2013).

The Holly and Center systems are supported by gas gathering agreements with both BG Group and EXCO pursuant to which both parties have jointly agreed to a 584 MMcf/d minimum volume commitment with respect to their collective production gathered by both systems. Both systems are expected to be available for future drop down into Marlin.

“This transaction diversifies and expands the partnership’s service offerings and customer base, and positions the combined partnership for materially accelerated distribution growth over the coming years that is immediately accretive to Marlin unitholders, including the common and subordinated units that I, indirectly through NuDevco, continue to own,” said Marlin CEO Keith Maxwell.

Closing of the transactions is expected during the first quarter.