Kinder Morgan Interstate Gas Transmission LLC’s (KMIGT) proposal to sell a 432-mile segment of its Pony Express natural gas pipeline to an affiliate (Kinder Morgan Pony Express Pipeline LLC) for the purpose of converting it to transport crude oil from the Bakken and Denver-Julesburg/Niobrara shales has received a mixed reaction at FERC. 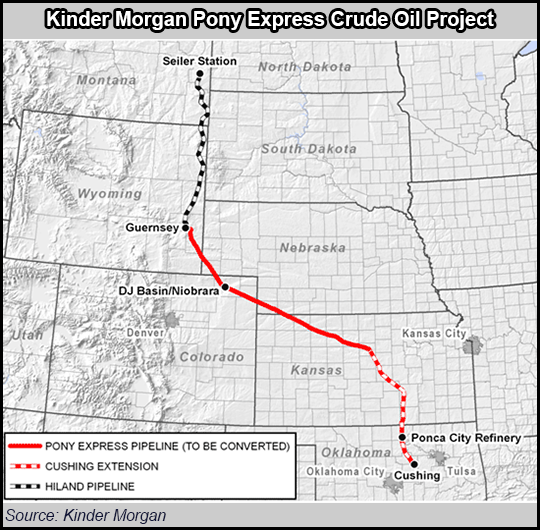 Three ethanol producers — Nebraska Corn Processing LLC, Prairie Horizon Agri-Energy LLC and Trenton Agri Products LLC — urged the Federal Energy Regulatory Commission to convene a staff-led technical conference to explore issues related to the proposed alternative service for gas shippers on KMIGT’s system. In the meantime, “we…submit that KMIGT has not carried its burden of showing that the proposed abandonment is in the public interest or that shippers will not be prejudiced by the sale and, therefore, the application should be denied.” KMIGT filed its application for the conversion/replacement project in August (see Shale Daily, Aug. 17) and the protests were filed Sept. 5.

The Wyoming Pipeline Authority (WPA), which oversees the development of pipeline infrastructure in and out of the state, said it supported the KMIGT proposal, but it asked FERC to impose some conditions. The Kansas Corporation Commission (KCC) said that while it did not oppose the proposed conversion, it had “serious rate concerns.”

This is the second time Pony Express has sought to change its stripes. In 1997 the Commission approved its request to convert approximately 804 miles of the line, originally built as a crude oil line, to natural gas service.

The proposed re-conversion and abandonment of the 432-mile segment of the Pony Express line from KMIGT’s existing Guernsey Compressor Station in Platte county, WY, to an interconnect with Natural Gas Pipeline Co. of America (NGPL) would clear the way for the transportation of crude oil produced from the Bakken formation in Montana and North Dakota to the oil hub at Cushing, OK, where the oil supplies can have access to local refineries or be transported by downstream pipelines to refineries in other regions of the country, including the Gulf Coast. The 432-mile segment includes 139 miles of 20-inch diameter pipe, 244 miles of 22-inch diameter pipeline and 48 miles of 24-inch diameter pipe.

Kinder Morgan a year ago floated the idea of converting a portion of Pony Express back to its original function of carrying crude, citing the booming oil development in the Bakken and the Denver-Julesburg/Niobrara shales and a shrinking demand for Rockies gas in the East.

The proposed abandonment, if approved by the Commission, “will result in the degradation of the quality of the gas supplied to the ethanol producers’ facilities and…will replace low-nitrogen, high-Btu gas with high-nitrogen, low-Btu gas, which will disrupt the ethanol producers’ operations and cause them to have significant costs,” the three ethanol makers said.

“Absent significant capital investment, this replacement gas supply will not only result in operations problems for their plants, but will…lead to either almost certain or highly likely violations of their current Clean Air Act permits.”

The trio said they are “critically dependent on a reliable supply of natural gas and all three made a deliberate choice, after careful due diligence, to locate their plants so that [they] could receive natural gas delivered over the Pony Express pipeline — natural gas that is both in quantity and quality appropriate to run their plants while at the same time, enabling them to remain in compliance with their air emissions permits.”

KMIGT said it has entered into agreements with Trailblazer and NGPL and is currently in discussions with SSC and WIC to meet shipper obligations.

While it supported KMIGT’s proposal to abandon a segment of the Pony Express line, WPA urged FERC to impose conditions on the abandonment to protect customers against interruption of service and from any future increase in rates due to the cost of the abandonment itself or associated with the cost of alternate service on another pipeline.

The KCC said it “[did] not oppose the proposed conversion of a segment of the Pony Express from under-utilized natural gas service to needed oil pipeline transportation. However, the KCC has serious rate concerns related to the unfinished business of the previous conversion of the Pony Express pipeline facilities from crude oil to natural gas service.”

“Despite the fact that the Pony Express Pipeline facilities were certificated [for natural gas service] more than 15 years ago, fundamental questions regarding rolled-in rate treatment and inclusion of a substantial acquisition premium in rate base remain to be resolved…The Commission should set KMIGT’s abandonment application for hearing under Sections 7 and 5 of the NGA [Natural Gas Act] to determine the interrelated questions whether, in the absence of a rate reduction, KMIGT’s rates would be ‘unjust and unreasonable’ if the abandonment were to be authorized, and whether authorizing abandonment in the absence of such a rate reduction would serve the ‘public interest.’ These are two sides of a single coin.”

KMIGT asked the Commission to act on its application by May 1. “This time frame is necessary to permit the proposed construction of replacement-type natural gas facilities, isolation of specific Pony Express Pipeline segment facilities from KMIGT’s existing system, and sufficient time for conversion of the abandoned pipeline segment to accommodate the transportation to meet a market driven in-service date of Aug. 1, 2014,” it said.

As a result of three open seasons held in May, Kinder Morgan Pony Express said that shippers have contractually committed to between 110,000 b/d and 145,000 b/d of light crude oil transportation service on the converted line.