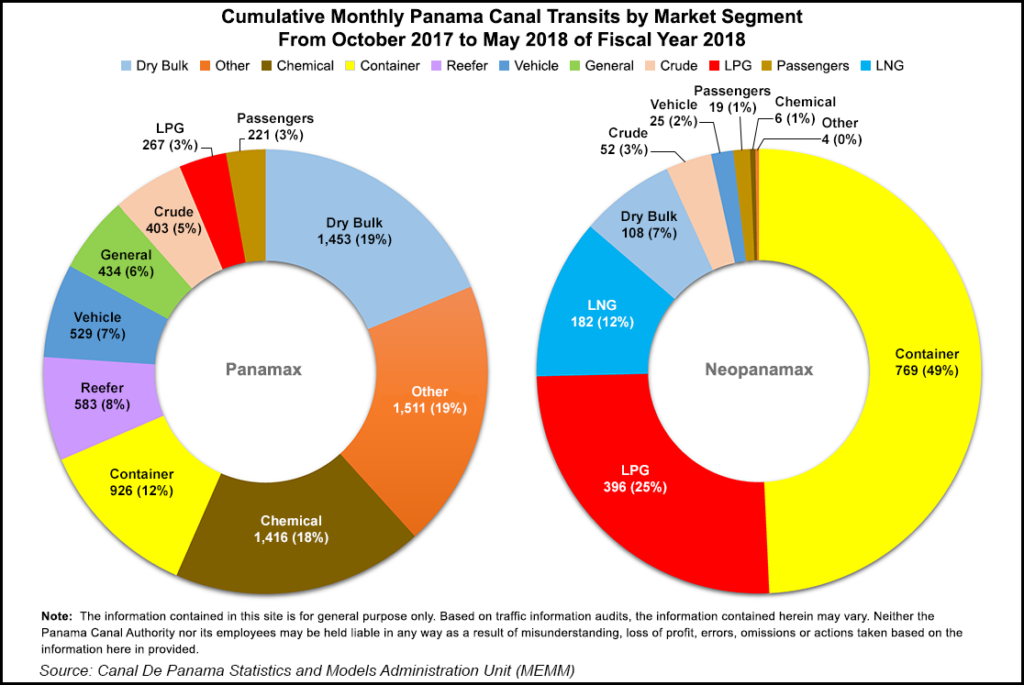 The changes, set to take effect on Oct. 1, were explained in detail by Deputy Administrator Manuel E. Benitez during a press briefing at the recent World Gas Conference in Washington, DC.

“Our plan is to be ahead of the demand,” Benitez told the audience.

Under the revised rules, LNG ships would be able to traverse the Canal at night, and two carriers at a time could be on Gatun Lake, the man-made waterway at the north end. The changes would allow two LNG tankers to move in different directions through the Canal at the same time.

The Panama Canal Authority (ACP) also would be better able to identify “ghost bookings” by operators that reserve slots in advance but then fail to show up.

“Together, these changes will provide more flexibility and time during the day to transit LNG vessels, and result in an opportunity for LNG shippers to compete for a second booking slot.”

The Canal expansion completed two years ago included a new set of locks on the Atlantic and Pacific sides of the waterway, creating a third lane of traffic and doubling the cargo capacity. The expanded locks are 70 feet wider and 18 feet deeper.

Today the expanded Canal has a total of 8 slots available for reservations, with as many as 11 ships passing through in one day. ACP’s analysis shows the new larger locks may be able to handle as many as 3 LNG shipments in one day.*

In fiscal year 2019, the ACP forecasts that 60 million metric tons (mmt) of LNG will pass through the waterway, with about two-thirds, or 41 mmt, from the United States. By 2022, the Canal expects to be able to offer three bookings a day for LNG carriers.

The restrictions now in place require the ACP to provide one dedicated reservation slot a day to LNG carriers, which equates to seven dedicated booking slots a week. One slot a day is, for now, more than enough to meet LNG shipping demand, which averages about 5.5 transits a week.

In addition to the one dedicated slot a day, the Canal frequently works with customers to transit vessels that arrive without a prior reservation, as long as the day’s vessel mix allows, Benitez noted.

Cheniere CEO Jack Fusco in May had said the Panama Canal route was becoming an integral part of the Houston-based operator’s business plan. “The Panama Canal is an important piece of infrastructure for both Cheniere and our customers, and our ability to utilize it efficiently is important, especially as a preferred route to growing demand centers in Asia,” Fusco said at the time. The ACP “has demonstrated significant cooperation and support” to increase LNG trade.

In late April, the Canal also transited the first-ever shipment of LNG from the Dominion Cove Point terminal in Maryland to Japan.

LNG transits are expected to continue to escalate as more export terminals are opened along the U.S. Gulf Coast and as more LNG supply moves to Central American destinations.

“By lifting these restrictions on Oct. 1, the Canal will unleash even more capacity for LNG,” said ACP’s Silvia de Marucci, executive manager of the economic analysis and market research division. “In addition to the one reservation it guarantees each day, the Canal will soon offer LNG shippers, for the first time, the opportunity to compete among our wider vessel segments to book a second daily slot.”

The opportunity to compete for a second slot has never been available to LNG shippers. It would be offered along with offerings to LNG vessels that arrive early for their reservations or without one altogether.

The Canal’s decision to lift restrictions for LNG traffic has come with experience in transiting the very large gas carriers, or VLGCs. In addition to LNG exports, the expanded Canal has opened up the market for more liquefied petroleum gas exports transited via VLGCs.

The decision to lift restrictions also comes at an opportune time in the market, Benitez noted.

LNG traffic via the Canal is expected to grow by 50% at the end of this fiscal year from 2017, increasing to about 244 transits from 163.

“As the trade of, and interest in, LNG continues to rise, these new measures will ensure the Canal remains one step ahead of demand and is able to offer the same service, flexibility and opportunity that it always has to keep global trade moving safely and swiftly,” Benitez said.

The Canal expansion completed two years ago was the largest enhancement project in the waterway’s 103-year history.

The impact of the Neopanamax Locks is demonstrated across all segments, although perhaps in no segment more than LNG, which is the waterway’s fastest growing, Benitez noted.

“The expanded Canal is redrawing global trade routes, in the LNG industry and across segments, as shippers have more opportunity to take advantage of the economies of scale provided with the Neopanamax Locks,” he said.

“Thanks to the careful planning and strategic optimization of our operations, we’re confident the expanded Canal will facilitate further growth in international trade and have a far-reaching impact in communities around the world.”

LNG tankers today pay about $500,000-525,000 to use the Canal. The ACP also is seeing bigger container ships willing to pay more than $1 million. One advantage to revising the transit rules is that more ships would be able to move to the “$1 Million Club,” allowing shippers to increase volumes without taking up added slots, Benitez said.

The ghost bookings have created problems because as slots were reserved, some tankers avoided the Canal if there were no slots available. When the tankers failed to show, business was lost.

The ACP now is tracking bookings using satellite technology and advising potential customers if a slot may be available within a three-day period, de Marucci said.

A study also is underway to determine whether another expansion could be done to allow even larger ships, such as very large crude carriers, or VLCCs, to use the waterway.

“We don’t anticipate this is something we have to do immediately, but we are constantly monitoring demand,” Benitez said.

The Canal also has reaffirmed a commitment to environmental sustainability, prioritizing water savings and reducing its carbon footprint. In the two years of the Neopanamax Locks’ operations, the waterway has recycled 60% of the water used per transit and is on track to reduce an estimated 160 million tons of carbon dioxide emissions over the next 10 years.

*Correction: In “PanamaCanal Revising Rules to Ready for Expanding LNG Traffic,”the number of slots available for reservations today is eight.The new larger locks may be able to handle as many as threeliquefied natural gas shipments in one day. NGI regrets theoriginal errors.