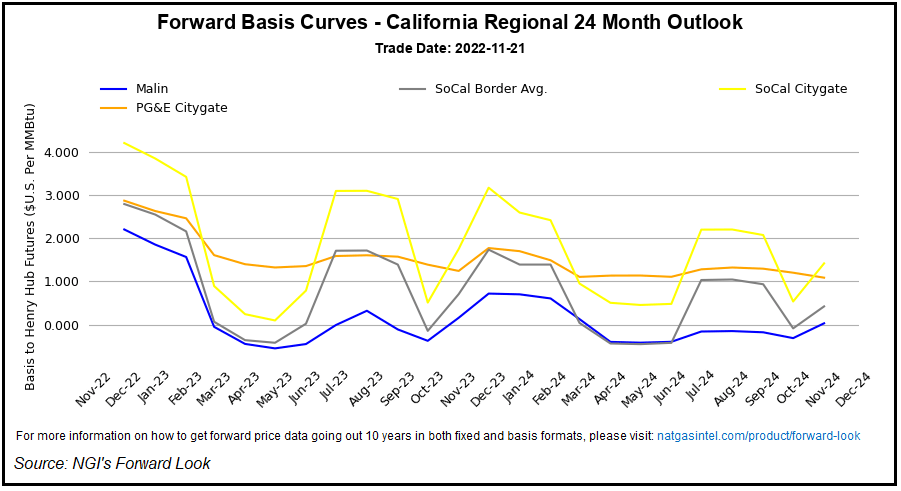 The National Weather Service (NWS) said biting cold temperatures and low-elevation rain and mountain snow would hit the Pacific Northwest and the Northern Rockies over Thanksgiving, with another winter storm swiftly following.

AccuWeather said this would be the start of a much stormier and colder pattern overall for the West in the next few days.

Criterion Research LLC noted that Canadian imports into the Pacific Northwest have ratcheted up amid the bitter conditions, with regional demand remaining high even as overnight temperatures trended on the warm side. Storage facilities in the region also boosted withdrawals.

Meanwhile, inventories at Pacific Gas & Electric Corp. (PG&E) are low. Maintenance along the PG&E pipeline, which began on Nov. 21, is set to continue through late November, adding to constraints, Criterion said. PG&E declared an operational flow order amid the tight conditions. Storage withdrawals extended into Southern California as well.

“PG&E’s storage was in especially bad shape as its net inventory dropped to only 3.8 Bcf,” Criterion Research’s James Bevan, director of research, said. “To put this in perspective, aside from 2019 (and this year), inventories have only been lower once, and that was 2018’s end of season. Not a promising look.”

There are lots of potential reasons prices have flirted with $7.00 again. Some traders pointed to the potential for a railroad strike that could limit coal deliveries and prop up gas demand. The possibility of cold weather returning in December also has provided momentum for bulls, as has the typical volatility seen ahead of contract expiration.

The midday GFS was a little further colder trending Tuesday (Nov. 29) through Thursday (Dec. 1) by favoring a stronger cold shot across the northern part of the country, according to the forecaster. Importantly, the latest GFS held the HDDs gained in its earlier run.

“We must expect large swings in run-to-run forecast demand in the weather models the next several days as they struggle to resolve just how much cold air over Canada will advance east of the Plains Dec. 1-7,” NatGasWeather said. “The concern is if cold becomes established over the northern U.S. Dec. 1-7, there’s likely to be reinforcing frigid shots to follow Dec. 8-12 to keep strong demand and bullish sentiment in place.”

Given the recent cold that’s blanketed much of the Lower 48, market observers expected a considerable decline in storage inventories. After all but erasing deficits to historical levels, storage deficits started to resurface in the latest round of government inventory data.

On Wednesday, the Energy Information Administration (EIA) said inventories for the week ending Nov. 18 fell by 80 Bcf, coming in on the bearish side of consensus but far steeper than historical draws.

Last year, the EIA recorded a decline of 14 Bcf in the comparable week, while the five-year average decrease is 48 Bcf.

Meanwhile, estimates ahead of the report were wide ranging, from a draw as light as 60 Bcf to one as steep as 111 Bcf.

Projections submitted to Reuters ranged from withdrawals of 65 Bcf to 111 Bcf, with a median decrease of 86 Bcf. A Bloomberg survey of nine analysts had a range of draws from 74 Bcf to 111 Bcf, with a median pull of 86 Bcf. Estimates submitted to a Wall Street Journal poll also were within that range and averaged an 89 Bcf withdrawal. NGI estimated a lower-end draw of 65 Bcf.

Broken down by region, the South Central region led with a net pull of 28 Bcf, according to EIA. This included a 19 Bcf draw from nonsalt facilities and a 9 Bcf pull from salts. Midwest stocks fell by 21 Bcf, and East stocks slid 16 Bcf.

Mountain inventories dropped 5 Bcf, and Pacific stocks were down 9 Bcf. Notably, the Pacific is the only region trailing historical levels by a wide margin. Including the most recent storage pull, stocks now are nearly 20% below the five-year average, according to EIA.

“The cold northern latitudes may drive notable heating demand into mid-December to help support prices,” EBW senior analyst Eli Rubin said. “The key question is how far south cold can penetrate, with DTN noting that models often underestimate the extent to which shallow Arctic cold can undercut lofty ridges. If the locus of cold air shifts eastward into the latter half of December, as DTN believes likely, the increase in heating demand could propel Nymex futures still higher.”