As part of a strategic review aimed at forming a smaller, more profitable company, Los Angeles-based Occidental Petroleum Corp.’s (Oxy) board of directors on Friday authorized pursuit of selected asset sales, including potentially some overseas and Midcontinent assets, along with a portion of a general partner interest in Plains All American Pipeline (PAAP). 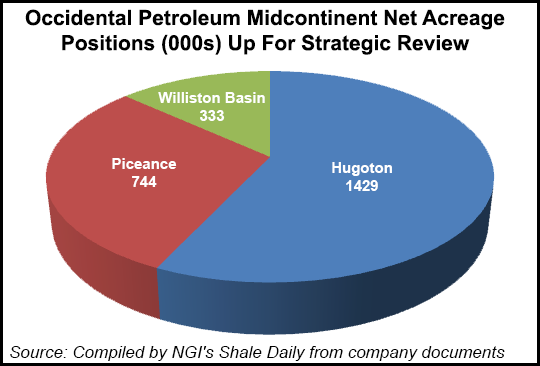 The review is slated to be completed “in the coming months,” and any individual sales will be disclosed as they occur, Oxy said.

In including the Texas oil pipeline, PAAP, Oxy described what could be in play as “a portion” of the company’s current 35% investment in the general partner of Plains pipeline, “resulting in pre-tax proceeds of $1.3 billion. Oxy’s remaining interest in PAAP, based on the IPO price [$22/share last Wednesday], is worth approximately $3.4 billion,” an Oxy spokesperson said.

Company officials stressed that the potential sales “will generate a significant amount of proceeds,” and together with the company’s excess cash on the balance sheet, the added funds will mostly be used “to reduce Oxy’s capitalization.”

“These are the first steps in our effort to streamline the business, concentrate in areas where we have depth and scale, and improve overall profitability,” said CEO Stephen Chazen, emphasizing that the goal is to make Oxy a smaller company with more manageable exposure to political risk. Chazen said other strategic alternatives will be considered as the internal review progresses.

Overall in the Midcontinent, Oxy holds more than 4.5 million gross acres with 2012 proved reserves of 211 million boe that are expected to increase by the end of this year. For the first six months this year, net production in the region was 66,000 boe/d. This includes more than 2,000 drilling locations.

Oxy’s Williston Basin assets, some of which could be sold, including 500,000 gross acres in the Bakken Shale play, along with what the company described as upside potential in the Pronghorn and Three Forks, along with potential oil-driven rate and reserve growth throughout the basin.

Hugoton field in Kansas/Oklahoma is Oxy’s largest play in terms of acreage (1.4 million net acres), and it is viewed by the company as having “low-cost, long-lived legacy assets” in one of the largest U.S. natural gas fields.

In the Rockies/Piceance the company has 744,000 net acres with Niobrara potential.