Natural gas prices for physical delivery Friday on average were unchanged in Thursday’s trading. Factor out the extreme low prices at just a couple of Marcellus points burdened by a lack of infrastructure and the physical market on average gained a couple of pennies. 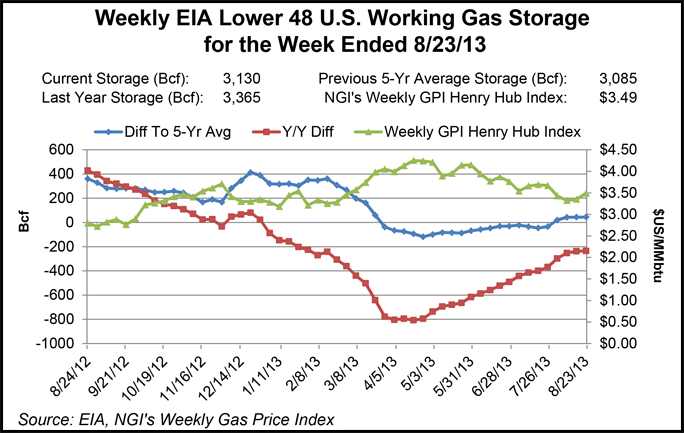 Northeast and East points were solidly in the loss column, and points in the Upper Midwest fluctuated within a couple of cents of unchanged. The Energy Information Administration (EIA) reported a build of 67 Bcf in its weekly inventory report, above trader expectations, and October futures peeled off 13 cents from earlier highs before recovering. At the close October had gained 3.6 cents to $3.618 and November was up by 3.0 cents to $3.720. October crude oil shed $1.30 to $108.80/bbl as geopolitical tensions subsided, at least momentarily.

In Thursday’s trading, a nearly 10-cent differential continued between Chicago Citygate and Transco Zone 6 into New York City, and traders see conditions in place that may continue that spread at least until the weather turns cold.

“Gulf gas really isn’t going to the eastern markets anymore,” said a Houston-based Chicago area marketer. “It’s mostly being served out of the Marcellus, and it doesn’t make a lot of sense to bring the old Transco Station 85 gas to the New York markets because there is no spread. Northeast markets aren’t being served out of their traditional homes until the wintertime.”

“Because there is not an easy route for excess gas to get into the Midwest, it’s still somewhat isolated. You have your Canadian gas coming in as well as the Rockies, and now you have a little differential in the Michcon and Consumers area setting up where it’s difficult to get gas in there. That’s why you are seeing the 10-cent to 20-cent premium of the Michcon and Consumers over the Chicago area,” he said.

Greatest declines on the day were posted in the Marcellus. Gas on Transco-Leidy Line tumbled 82 cents to $1.69, and deliveries on Tennessee Zone 4 Marcellus dropped 70 cents to $1.55.

The strong finish by futures notwithstanding, analysts are questioning if the heatwave of last week really had any impact on supply-demand balances. “So far the first week or so of the evolving heat wave did not result in a significant underperformance in the weekly injection as it was also slightly above both last year and the five-year average,” said Dominick Chirichella, senior fellow at the Energy Management Institute in New York. “[Thursday’s] disappointing injection level [report] is raising concern in the minds of the bulls insofar as how the next several injections will evolve as the weather forecast actually begins to change.”

Weather forecasts changed little overnight, and MDA Weather Services in its six-to 10-day outlook showed a ridge of below-normal temperatures centered over Ohio and extending from New Jersey to Illinois. Above-normal temperatures extend from Texas and the Southern Plains to the Pacific Northwest. “The forecast carries the same themes as [Wednesday], with changes limited to the smaller details. These themes include a gradual shift of the mean ridge to the West Coast and, as a result, a trough over the East.

“Warmth will intensify along the West Coast by late period to include much aboves while under the control of the ridge overhead. Belows will settle in under the trough through the eastern Midwest and Mid-Atlantic.”

Even with Thursday’s release of storage data, Addison Armstrong of Tradition Energy sees weather as still the main market determinant with lower prices on the horizon. “Weather forecasts are currently the primary price driver, and the heat that is pervading the Midwest is due to break cleanly by Labor Day. After that, a cooler pattern is likely to settle over the eastern half of the country. That is likely to put downward pressure once again on natural gas prices as consumption eases and inventories build at a faster pace.”

The Tradition Energy forecast for Thursday’s storage report was for a 64 Bcf build, which was right in line with not only consensus estimates but also historical norms. Last year, 63 Bcf was injected, and the five-year average was for a 66 Bcf increase. Tim Evans of Citi Futures Perspective and Ritterbusch and Associates both correctly calculated a 67 Bcf build, and a Reuters survey of 24 traders and analysts revealed an average 63 Bcf increase with a range of 54-70 Bcf. Bentek Energy’s flow model forecast a 62 Bcf increase.