Backers of the proposed Oregon liquefied natural gas (LNG) facility at the mouth of the Columbia River won an appeal in a county land-use case and hailed a Canadian Supreme Court decision that may make it tougher for competing LNG export projects in British Columbia (BC) to move ahead. 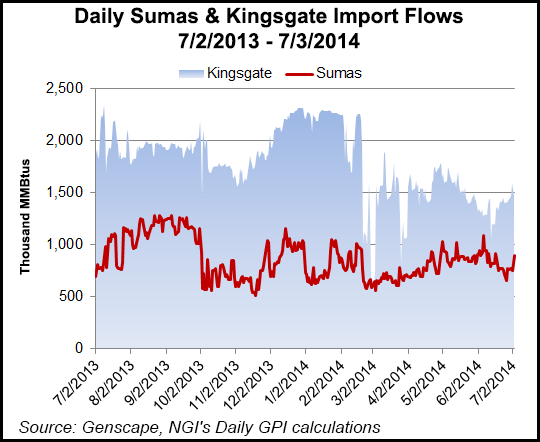 Oregon’s Land Use Board of Appeals (LUBA) last Friday sent back to Clatsop County an earlier decision denying Oregon LNG a permit to build its connecting natural gas transmission pipeline across parts of the county. LUBA determined one of the five county commissioners voting on the case was biased and should have recused himself.

The county is now charged with reconsidering the application of the Warrenton, OR-based project for the 41-mile segment of the 86-mile, 36-inch diameter pipeline traversing Clatsop. The five-member commission held an executive session Wednesday night to discuss the latest development and set another executive session for July 16 to decide whether to appeal or to restart the local permitting process, a county spokesperson told NGI.

Separately, a day earlier the Supreme Court in Canada granted First Nations title to a 1,700-kilometer area lying outside its native reserve in BC. First Nation leaders throughout Canada hailed the decision as historic, adding more uncertainty about the proposed development of multiple LNG export terminals fed by shale gas supplies from northern BC.

The local permitting issue dates back to 2010 when Oregon LNG’s proposed pipeline was determined by an independent hearing officer to have met all the Clatsop County land use codes and standards, Hansen said. An appeal filed by Peter Huhtala, the executive director of the opposing Columbia River Business Alliance, was rejected. However, Huhtala later was elected to the Clatsop County Commission and was among those voting to reverse the earlier approval.

“Huhtala’s actions on the county commission were an egregious conflict of interest,” said Hansen, adding that LUBA agreed with him. “Our pipeline project complies fully with Clatsop County’s codes, and the previous county commission had approved it. We are gratified that LUBA recognized [Huhtala’s] obvious bias in this case and ruled accordingly.”

He added, however, that the latest LUBA action likely will be appealed by the county. Hansen has long contended that Oregon LNG will prevail despite the continued opposition locally (see Daily GPI, Oct. 14, 2013).

There has been a slight downtrend in imported volumes from Canada into Sumas and Kingsgate, WA, over the past year.

Hansen also has been counted among the skeptics that think Canadian LNG exports to Asia face some significant hurdles.