Already falling short of projected demand growth, a lack of investment in the oil industry threatens to lead to further volatility and a future energy shortfall, according to the Organization of the Petroleum Exporting Countries (OPEC). 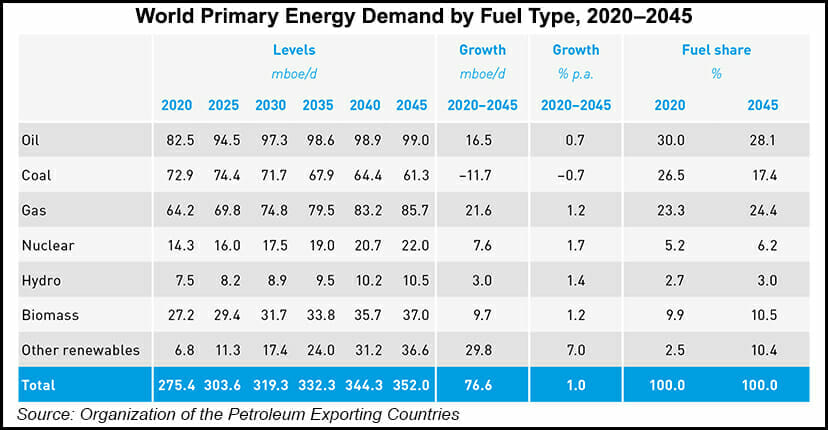 In its 15th Annual World Oil Outlook (WOO) released Tuesday, the Saudi-led cartel said underinvestment remained one of the “great challenges” for the oil industry. This was exacerbated by the Covid-19 pandemic, with investments declining by around 30% in 2020.

The drop in capital funneling into the oil sector also comes with the big shift to renewable energy.

OPEC sees growth in renewable energy growing fastest among fuels through 2045, expanding to 36.6 million boe/d in 2045 from 6.8 million boe/d in 2020. At the higher level, renewables would account for more than 10% of the global fuel mix, up from only 2.5% last year.

Oil Down, But Never Out

However, don’t count out oil, at least in the near term.

The cartel said oil in 2020 accounted for 30% of global energy requirements. Alongside post-pandemic demand recovery, the share of oil is projected to gradually increase to more than 31% by 2025. It is forecast to reach 99 million boe/d in 2045 from 82.5 million boe/d in 2020.

The global oil demand increase over the medium-term period (2020-2026) is estimated by OPEC at 13.8 million b/d. However, almost 80% of this incremental demand is expected to materialize within the first three years (2021-2023), primarily as part of the recovery process from Covid-19.

After 2025, oil’s share of the energy mix is forecast to begin a decline and eventually reach 28% by 2045. Notably, though, this is 1% higher than what the cartel had forecast in last year’s WOO.

“Despite decelerating oil demand growth in the second part of the forecast period and strong growth in other energy sources, such as other renewables, gas and nuclear, oil is expected to retain the highest share in the global energy mix during the entire period,” said OPEC Secretary General Mohammad Sanusi Barkindo.

Meeting the oil demand projections, however, requires “huge investments,” according to OPEC. The potential ramifications for not investing, said researchers, would not be in the interests of either producers or consumers.

“OPEC member countries remain committed to supporting investments, which benefit from sustainable market stability and the right enabling environment. This is a core focus” of the Declaration of Cooperation,” Barkindo said.

Cumulative investment requirements in the oil sector are forecast to total $11.8 trillion from  2021-2045, according to OPEC. About 80%, or $9.2 trillion, is directed toward the upstream, the bulk of which is in North America. U.S. tight oil, in particular, drives medium-term supply growth in countries that are not members of the cartel.

“Downstream and midstream investment needs, in order to expand and maintain the associated refinery, storage and pipeline systems required to bring oil to market, necessitate another $1.5 and $1.1 trillion, respectively,” Barkindo said.

The transportation sector is forecast to be the major contributor to future incremental oil demand, adding 13 million b/d between 2020 and 2045. More than 90% of the growth is projected to come from the road transportation and aviation sectors, which OPEC sees contributing around 6 million b/d each. However, researchers noted that a large contribution iis because of the sharp demand decline last year in these two sectors.

Adjusting long-term projections for the demand decline in 2020, the petrochemical sector remains the largest source of incremental oil demand to 2045, similar to last year’s outlook. Meanwhile, long-term demand growth is set to be limited by growing penetration of electric vehicles (EV), which the cartel sees approaching 500 million by 2045, representing almost 20% of the global fleet.

Some growth is also projected for natural gas vehicles, with an expected increase of 80 million between 2020 and 2045.

Globally, total energy demand is set to increase to 352 million boe/d by 2045 from 275.4 million boe/d in 2020, according to the WOO. Of this, more than 70% is to come from developing nations that are not members of the Organization for Economic Cooperation and Development (OECD), primarily because of increasing populations and growing economies in Asia, Africa and the Middle East. For the OECD region, energy demand is set to flatten in the long-term.

“This underscores a further decoupling from economic growth due to structural changes and a policy push that continues to place increasing emphasis on energy efficiency and the deployment of low-carbon energy technologies,” Barkindo said.

The WOO outlined the cartel’s medium- to long-term analysis and projections for the global economy, oil and energy demand, liquids supply and oil refining, as well as related policy and technology matters.

Researchers said while the first signs of a strong economic recovery from the Covid-19 crisis are evident in various sectors, there is also “enormous potential for a huge rebound” to follow as pent-up demand is satisfied. This is aided by the lasting effect of huge stimulus and infrastructure packages.

“On the other hand, worries persist about the pace and trajectory of this recovery, the spread of Covid-19 variants, rising inflation and how to unwind the massive quantitative easing programs launched by many central banks that have helped to underpin the rebound,” Barkindo said.

The impact of the pandemic and the response mechanisms that have been developed will have a considerable impact on medium-term economic growth, according to OPEC.

“What is clear in this year’s WOO is that energy and oil demand have picked up significantly in 2021, after the massive drop in 2020, and continued expansion is forecast for the longer term,” Barkindo said.

OPEC researchers said there is growing awareness among policymakers in many countries that actions need to be accelerated to address climate change. “Ambitious” new policy intentions have been announced to achieve net-zero emissions by 2050.

Several major countries and regions – including the United States, Canada, the European Union including the UK and Brazil – have proposed roadmaps to meet these goals. China is targeting carbon-neutral growth by 2060. At the same time, there is increased public acceptance of products and services with a lower environmental footprint, and a state of technology development that offers solutions – even if they come at a higher cost, Barkindo said.

“These trends are being observed at a time when the post-Covid-19 recovery plans in some major economies provide significant sources of funding that could accelerate the energy transition,” he said.

In examining climate and environmental policies and the issues surrounding the energy transition, OPEC researchers said “it is clear that the challenge of tackling emissions has many paths, and we need to explore them all. We need to look for cleaner and more efficient technological solutions across all available energies.”

The latest WOO, released at the end of the cartel’s 60th anniversary year, “is a fitting bookend, once again highlighting OPEC’s unshakable focus on evolving a better understanding of our possible energy futures, and the challenges and opportunities we all face,” Barkindo said.