Maintenance work on two platforms in the Gulf of Mexico (GOM) and on a project shutting in some crude oil in Alaska may halt temporarily the growth in U.S. crude oil supplies, but onshore volumes should help alleviate the shortfall, according to energy analytics provider Genscape Inc. 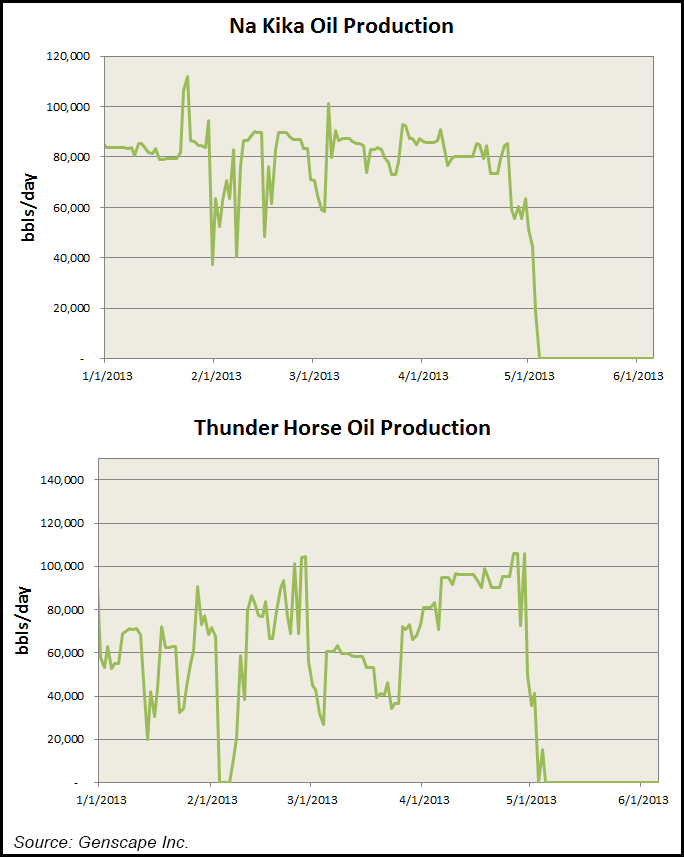 Genscape’s Jodi Quinnell, who covers the onshore and offshore crude oil markets, spent a few minutes with NGI’s Shale Daily on Thursday to discuss how the GOM’s growing contributions eventually will blend with the continuing growth in the onshore.

This spring, GOM shut-ins at BP plc’s Thunder Horse and Na Kika deepwater platforms, as well as maintenance on the TransAlaska pipeline in Alaska, have reduced U.S. crude oil volumes, and they will have an impact for the next few months, according to Genscape. Beginning May 3, Thunder Horse was shuttered for maintenance work for up to 45 days, and Na Kika was shut in because of regular maintenance at the Pascagoula Gas Processing Plant.

BP’s shut-ins have impacted U.S. crude oil volumes by about 170,000 b/d, with Na Kika’s 80,000 b/d and Thunder Horse volumes at 90,000 b/d. Na Kika is expected to begin ramping up this weekend, but it will be a few more weeks until Thunder Horse ramps up, Quinnell said. BP had said it would need to shut in the platform for 45 days, but the work is going faster than anticipated, she said.

There’s also crude shuttered from annual maintenance activity on Alaska’s North Slope and at the TransAlaska pipeline. Genscape in May said TransAlaska’s maintenance “has historically affected around 100,000 b/d from May to July.” TransAlaska operators reported that volumes for the first 12 days of May averaged 556,000 b/d, but from May 13-18, volumes dropped to an average of 465,000 b/d.

The onshore crude oil surge may help to displace some of the losses, and combined with oil imports, the effect could lead to temporary flat production levels, Quinnell said. Shut-ins aside, Genscape is predicting oil production in the onshore and the offshore to grow through the decade.

“A lot of onshore oil is very economic, more so than offshore plays,” Quinnell said. However, because of higher oil prices, “all the plays are working right now, onshore and offshore. Even with higher prices to work in the Gulf of Mexico, projects are in the money and producers are willing to drill their acreage out there.”

At some point, growing GOM oil volumes will compete with onshore production. But it will take a while.

Genscape in May said U.S. crude oil production had increased 1.6 million b/d since 2010 to more than 7 million b/d, which had “significantly reduced dependence on global waterborne imports.” Crude oil imports, meanwhile, have fallen from 8.5 million b/d in January 2010 to 7.3 million b/d in February 2013.

Growth in U.S. crude oil production is expected to continue over the next two years “based on the current price environment, with an additional 1.9 million b/d plus from 2012 levels.”

Once the United States is able to lasso its onshore and offshore crude oil potential, “the first thing to go will be imports,” Quinnell said. “We’re already seeing that, from light sweet crude onshore…We’ll continue to push out those imports, and light will be the very first to go.”

Once Light Louisiana Sweet crude imports end, intermediate crude oil imports, like those produced in the GOM, would be the next to fall, she said.

“That’s a lot of Gulf of Mexico production,” she said. Between growing GOM volumes and surging onshore output, “at some point, there will be too much crude to displace all of the imports. We definitely will come to a point where [onshore and offshore output] will come to a head.” However, it won’t come nearly as quickly as it has for natural gas.

There’s “so much natural gas onshore” that hurricanes in the GOM now are a much smaller factor on domestic prices, said Quinnell. The GOM still remains pivotal for U.S. oil supplies.

“We still produce about 1.5 million b/d of crude from the offshore, the deepwater and the Shelf,” she said. “So the offshore definitely is a bigger piece of the pie, and a hurricane definitely would impact that…It will still be a pretty long time before we don’t rely on it.”

Some of the crude oil lost this summer is going to be offset by continued growth in the onshore, particularly from the Eagle Ford and Bakken shales and the Permian Basin, according to Genscape. “This comes at a time when demand for crude in the U.S. is ramping up as spring turnarounds at refineries are ending and the summer demand for gasoline is increasing.”

Genscape’s U.S. crude analysis uses proprietary data covering more than 20,000 individual wells. Once GOM and Alaska maintenance is complete, “nearly 500,000 b/d” is forecast to be added between July and the end of 2013.

According to Genscape, the largest crude oil contributors to U.S. onshore crude stocks today are the Eagle Ford Shale at 134,000 b/d-plus, North Dakota/Bakken Shale at more than 78,000 b/d, and the Permian Basin with more than 50,000 b/d.

Louisiana light sweet crude output “will dominate the growth,” with more than 217,000 b/d, “but condensate production should not be overlooked with an additional 88,000 b/d added between July and the end of the year,” Genscape said.

In March, analysts at Raymond James & Associates Inc. said the GOM “should not be ignored, and with memories of the Macondo oil spill starting to fade into the mists of time, the Gulf of Mexico should become an increasingly meaningful contributor to supply in the second half of this decade,” they said. Through 2020, they expect GOM oil volumes to increase faster than in the onshore, up on average 8.3% a year, compared to 6.1% in the onshore.