OPEC slashed its global crude oil demand outlook for a second consecutive month, citing slowing economic activity in the United States and Europe as well as ongoing pandemic-related lockdowns in China and geopolitical upheaval linked to Russia’s war in Ukraine. 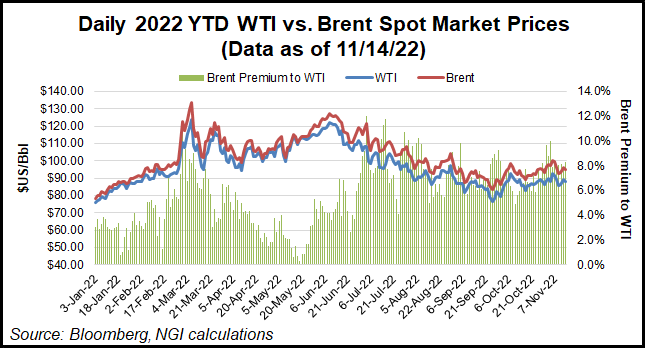 In its closely watched monthly market report, the cartel on Monday lowered its forecast for global oil demand growth this year by 100,000 b/d to 2.5 million b/d. It lowered its 2023 growth outlook by the same amount to 2.2 million b/d. This followed a downgrade a month earlier.

OPEC also dropped its estimate for the amount of crude it would need to pump to meet demand in the current quarter by 520,000 b/d. That followed a similar downgrade a month earlier and furthered the case for the group’s move this month – along with allies known as OPEC-plus — to cut its members’ collective output by 2 million b/d.

“The significant uncertainty regarding the global economy, accompanied by fears of a global recession, contributes to the downside risk for lowering global oil demand growth. In addition, China’s strict adherence to the zero Covid-19 policy adds to this uncertainty, making the country’s recovery path even more unpredictable,” OPEC researchers said in the report. OPEC-plus’ “proactive and preemptive decisions” to slash output could balance supply/demand by year-end and “contribute to global oil market stability.”

OPEC researchers said their world economic growth forecasts for 2022 and 2023 were unchanged at 2.7% and 2.5%, respectively.

For the United States, they predicted gross domestic product growth in 2022 of 1.5% and expansion in 2023 of only 0.8%. Euro-zone economic growth expectations for 2022 and 2023 also were unchanged at 3.0% and 0.3%, respectively, they said. In the wake of the pandemic and supply chain disruptions, both the United State and Europe are grappling with 40-year-high inflation and spiking interest rates.

OPEC also left its forecasts for China’s growth unchanged at 3.1% for 2022 and 4.8% for 2023. While stronger than other parts of the globe, the predicted figures are far lower than China’s growth of the past decade, with the exception of 2020.

The U.S. economy contracted in the first two quarters of 2022 and expanded at a 2.6% rate in the third quarter, according to the federal Bureau of Economic Analysis.

President Biden has argued in public comments this month that the U.S. economy is generating fresh momentum. He said the OPEC-plus cuts risk overshooting and leaving the global market dangerously undersupplied, particularly if the global economy rebounds and demand bounces higher in the current quarter. Biden has said the cartel appears focused on maintaining lofty prices and, by extension, profits.

Brent crude prices, the international benchmark, hovered around $95/bbl on Monday, up more than 3% from a month earlier and up about 20% from the start of 2022.

In its latest report, the Energy Information Administration (EIA) said Wednesday that output for the week ended Nov. 4 climbed by 200,000 b/d from the previous week to 12.1 million b/d. That brought production close to the 2022 peak of 12.2 million b/d, which was reached over the summer.

The increase came alongside a bump in demand, with overall consumption of petroleum products up 4% week/week.

U.S. production, however, remained well below the pre-pandemic record of 13.1 million b/d reached in early 2020.