Analysts with Bank of America Merrill Lynch Global Research(BofAML) said the election of Donald Trump caught financial markets by surprise and that uncertainty will likely continue through the medium term, in part because of comments the president-elect made on the campaign trail about free trade and immigration. 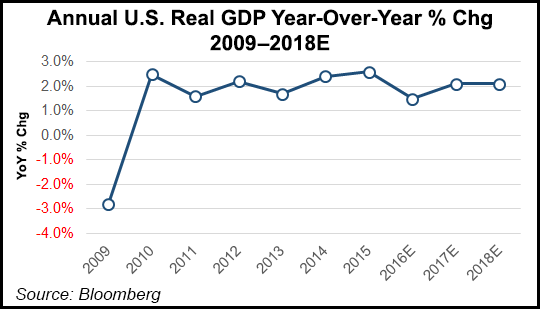 During a conference call Wednesday, Michelle Meyer, head of U.S. economics, said BofAML shaved 0.5% from its gross domestic product (GDP) growth forecast for the first half of 2017, which in turn lowered its annual GDP forecast for the entire year.

“Clearly this was a surprise result relative to the polls, to what most people were assuming in the marketplace, and certainly to what we were assuming for the economy as well,” Meyer said. “In light of these election results, we’re making moderate downward adjustments to near-term growth forecasts, but we’re highlighting both upside and downside risks to economy thereafter.

“Essentially, there’s just a lot of uncertainty about what policies will actually be implemented, and over what time frame they might be implemented.”

In the near-term, Meyer said the world’s financial markets have taken Trump’s election “in stride.”

“Generally, it’s been a bit of a risk-on environment,” Meyer said. “However, if that proves to be fleeting and if we do get some increase in volatility, maybe a bit more of a risk-off in the markets, then that would be somewhat damaging for the economy. That was our expectation from strategists going in.”

Meyer said markets are likely to look weak in the first half of 2017, especially if uncertainty were to linger and businesses reacted by postponing capital investments. “We also think that the outcome of the election could possibly make the Federal Reserve hike in December a little bit more challenging,” she said. “Our baseline is that the Fed is more likely than not to postpone the hiking cycle a bit, and not go ahead with the rate hike in December.

“Admittedly, it’s a very close call, and is largely a function of what happens in the markets between now and the next rate hike.”

The outlook is much more complicated for the medium-term.

“On the one hand, President-elect Trump is advocating across-the-board tax cuts, which could be quite significant,” Meyer said. “These would be tax cuts both to income levels and also corporate tax cuts, which presumably would add to GDP growth in the medium term, especially if it’s accompanied by fiscal [and] infrastructure spending, for example.

“However, there’s a lot of uncertainty as to what might happen around trade. One of the main areas of focus for candidate Trump was around reversing free trade. So, if we see greater trade tensions, if we see a potential drop in global trade, then that would be a negative for economic growth by raising import prices and by of course restricting the amount of goods and services that flows through our borders. There is a lot of uncertainty as well on what he might do on immigration, which could impact the availability of labor, which can impact the unemployment rate and wages.

“At this point, we’re just looking at many different scenarios. We have not revised our medium-term forecasts. We’re going to wait to see a bit more about the policies that might come through and use our judgment thereafter.”

“The good news is there is no more gridlock,” Subramanian said. “The bad news is we just don’t know what’s in store for the United States. It’s interesting because Trump’s first speech as president-elect [Wednesday] focused on the positives — his plans for the economy, which include growth and jobs, and actually coming together to implement meaningful, positive change.

“So far, Republican rhetoric has been unified, but we still have to weigh those positive comments and that potential for positive trajectory on growth trends, against geopolitical risks to trade, and the fact that Trump is new — he’s never held a public office. It’s hard to really get a sense of the proposals, and the likelihood, and the prioritization of the various measures that he has brought up during his campaign.”

Subramanian said the futures market, which was once down 700 points on Tuesday night, had a “knee-jerk reaction” to Trump’s election. “But it really warmed up in the last several hours ahead of the market open, coinciding with his remarks and his unified commentary. It was interesting to see that the market initially saw this as a negative, but actually came to the other side and the market is actually up on the day.

“We do think there is still heightened likelihood of increased volatility and potential for downside risk. The reasons are that this result is a surprise and a lack of clarity around Trump’s policies — from feasibility to prioritization — will likely weigh on the sentiment of industries, as well as corporations, and could pressure already muted business investment spending.”