Global demand for oil and natural gas is likely to continue growing for the foreseeable future, although talk of an impending oil price “supercycle” has proved premature for now, a panel of experts agreed Friday. 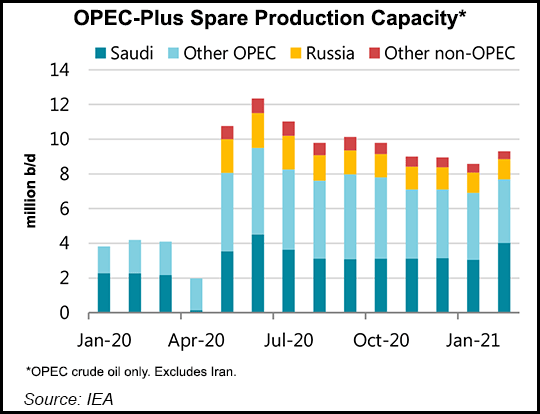 For the next five years, “We have a very constructive view on oil demand,” said ConocoPhillips chief economist Helen Currie in a webcast hosted by Rice University’s Baker Institute for Public Policy.

She said ConocoPhillips expects demand to recover to 2019 levels “on a sustained basis by probably 2022.” However, the Houston independent is keeping an eye on multiple bearish and bullish factors with potential to impact the recovery. Currie noted it will take time for the U.S. economy to recover from unemployment, underemployment and exacerbated inequality resulting from the pandemic.

Over the longer term, improving fuel efficiency in internal combustion engines will erode demand growth from the transport sector, and growing penetration of electric vehicles (EV) could possibly do the same, Currie said.

However, “there are a lot of questions to be raised” about how realistic some of the EV projections are, “particularly when you start to dig into…the supply chain of the mining sector and the minerals that are needed for all those batteries.”

Another trend worth noting is the growing hydrocarbon demand from the petrochemical sector, which “looks to be a growth area for a number of years now,” Currie said, “and a lot of that is demand for plastics. A lot of consumers don’t always realize just how much petroleum products are in their everyday lives…”

Although multiple bullish and bearish factors are at play, Currie said ConocoPhillips’ base case scenario is that oil and gas demand will grow for the foreseeable future and be “an enabler” of the energy transition.

IEA’s latest monthly Oil Market Report (OMR) forecasts a 5.5 million b/d rebound in global oil demand in 2021 after an 8.7 million b/d contraction realized in 2020. However, researchers indicated the supercycle talk was premature, due to the market’s massive spare capacity overhang.

The report noted that “oil inventories still look ample compared with historical levels despite a steady decline from a massive overhang that piled up during” the second quarter of 2020. U.S. stocks, meanwhile, increased for a third straight week for the period ended March 12.

In addition, the Organization of the Petroleum Exporting Countries (OPEC) and Russia continue to hold immense spare production capacity off the market. IEA researchers said OPEC’s spare capacity, excluding Iran, stood at 7.7 million b/d as of February. Spare capacity in countries not part of OPEC but which took part in supply cuts orchestrated by the cartel “hold an additional 1.6 million b/d that could be brought on to the market in short order.”

“The demand recovery, although fragile in the near-term, is expected to pick up strongly but there is plenty of OPEC spare capacity to meet that demand,” Bosoni said Friday.

On the supply side, Currie said, “We expect U.S. production to grow over the next five years.” She explained that even though capital discipline and returning free cash flow to shareholders “is the order of the day,” oil prices “not just in the front of the curve but at the back end of the curve” could help producers “to repair their balance sheet and perhaps to build production.”

As for the spare production capacity highlighted by IEA, Currie said, “We expect that to be returned to the market over time,” but that the pace remains unclear.

Iran also “becomes a very big wild card…in terms of the volumes that it can put back into the market when sanctions are lifted,” Currie said. She also cited Venezuela and “a whole host of other countries” with production upside potential such as Canada, Brazil and Guyana.

Currie and Bosoni were joined by Tudor, Pickering Holt & Co.’s Colin Fenton, chairman of commodities for the advisory practice, who expressed a similar view on both supply and demand.

He said even if fuel demand for hydrocarbons is removed from the equation, it would take non-fuel (i.e. petrochemical) demand only 48 years, growing at a compound annual growth rate of 3.5%, to equal today’s total demand.

As for the nearer-term supply picture, he said the recent decision by OPEC and its allies, aka OPEC-plus, to extend supply cuts through April reflected “an excellent assessment of demand” by the cartel, Fenton said.

He noted that one definition of a supercycle is for demand to be pressing against the limits of available spare capacity. “You can’t simultaneously say…that we’re in this supercycle, but then acknowledge that there’s 9 million barrels per day of spare capacity.”

In other words, “the supercycle story can be true but it’s premature.”

Rystad Energy’s Louise Dickson, oil markets analyst, said Monday that after last week’s “swift and painful correction” of oil prices that had been rocketing toward $70/bbl, prices were starting this week at a more sustainable level.

“There is still some residual pessimism in the market as Europe, instead of finally opening…is seeing pockets of increased Covid-19 cases, forcing many European countries to reinstate or extend lockdowns,” Dickson said. “Vaccination campaigns haven’t been as fast as the market had hoped for and consequently this will have an effect on the oil demand recovery, which in turn hurts prices, cutting some growth potential…

“If vaccination campaigns continue to face challenges going forward, 2021 may see up to 1 million b/d of oil demand not recovering this year, compared to a smooth recovery scenario.”