Regulators with the Ohio Department of Natural Resources (ODNR) passed a milestone in the Utica Shale last week, after having cumulatively issued more than 600 permits for horizontal wells targeting oil and natural gas. 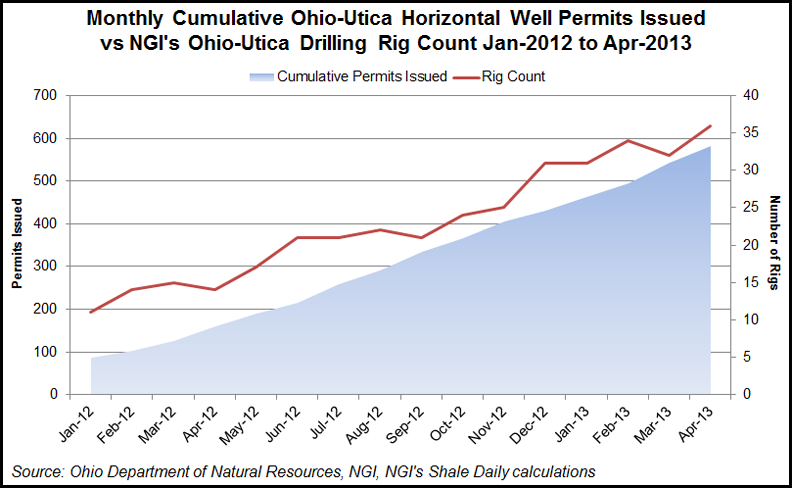 As of April 13, the agency has approved 605 permits in the Utica, most of them in Carroll County and to Chesapeake Energy Corp. Of those permits, ODNR said 196 wells have been drilled and 89 wells are in production. There are also 32 drilling rigs currently deployed in the play.

Carroll County had the most permits issued with 237, or 39.2% of the 605 permits issued in total. Its percentage of overall permits issued grew slightly, up from 38.1% in March (see Shale Daily, March 15). Carroll and its five geographic neighbors — Columbiana, Harrison, Jefferson, Stark and Tuscarawas counties — accounted for 440 permits, or 72.2% of the total.

Harrison County had 77 permits issued, followed by Columbiana County with 67. Guernsey and Jefferson counties followed with 33 permits each, Noble County had 32 and Monroe County had 25. Rounding out the list were Belmont (22), Mahoning (17), Portage (14), Stark and Tuscarawas (13 each) and Coshocton (five) counties.

Trumbull County had four permits issued, Holmes and Muskingum each had three, Knox County had two and Ashland, Geauga, Medina, Washington and Wayne each had one.

Chesapeake’s operators — Chesapeake Appalachia LLC and Chesapeake Exploration LLC — held the most permits issued with 387, or 64.0% of the total. Gulfport Energy Corp. was in a distant second place with 44 permits, followed by CNX Gas Co. LLC with 22 and Antero Resources Appalachian Corp. with 20.

Carroll County continued its overwhelming lead in terms of production, with 46 of the 89 wells, or 51.2%. Harrison County followed with eight wells. Columbiana and Noble counties had six wells each, followed by Guernsey and Jefferson counties with five each. Belmont County had three producing wells, Monroe, Stark and Tuscarawas counties each had two and Coshocton, Muskingum, Portage and Wayne counties each had one.

The ODNR issued 13 permits during the week of April 7-13. Of those, nine were in Carroll County, three were in Harrison County and one was in Noble County.

All nine of the permits issued in Carroll County were for Chesapeake wells, with three drilled in Loudon Township, three in Perry Township, and one each in Augusta, Lee and Union townships. Gulfport held the three Harrison County permits, all of which were for wells in Athens Township. CNX is now permitted to drill a well in Noble County’s Enoch Township.