A judge in Northwest Ohio has ruled that Kinder Morgan Inc.’s (KMI) 215-mile Utica to Ontario Pipeline Access (Utopia) project is not a common carrier system that would benefit the public, denying the company the ability to use eminent domain for easements along the route. 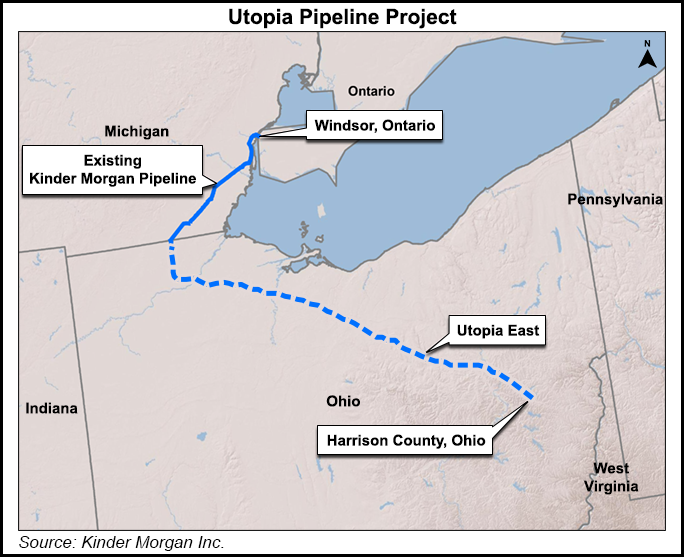 It was possible that KMI might have started preliminary work on the pipeline by the end of this year, a company official said this week, adding that some permits and authorizations were still needed to start the bulk of construction. The company said Wednesday, prior to the ruling, that it would start most of the work early next year (see Shale Daily, Oct. 12). It’s unclear how Wednesday’s decision in the Wood County Court of Common Pleas could affect the project’s timeline.

KMI said in a statement that the decision was “unfavorable,” adding that “we consider the court’s action to be a misinterpretation of existing law.” The company cited a recent decision by the Ohio Seventh District Court of Appeals upholding Sunoco’s right to eminent domain. When asked, KMI didn’t say how much land it needs to secure with eminent domain for the project.

Utopia would be a 12-inch diameter pipeline constructed entirely within Ohio from Harrison County to Fulton County. The pipeline would connect with an existing KMI pipeline and associated facilities to transport ethane and ethane-propane mixtures to the petrochemical market in Ontario. It would have an initial capacity of 50,000 b/d, which could be expanded to 75,000 b/d.

The project’s cost is estimated at $500 million and is supported by a long-term contract with Nova Chemicals Corp. KMI sold a 50% stake in the project to Riverstone Investment Group LLC (see Daily GPI, June 29)

Judge Robert Pollex said the pipeline would only benefit a private company. KMI has argued that plastics benefit the public, noting too that the pipeline would create jobs with a $500 million investment and help grow infrastructure in the region.

The company has been negotiating with landowners in 14 Ohio counties. Similar cases are pending involving Utopia in several of those, including in Lucas, Seneca and Sandusky counties, where landowners have refused to grant easements. KMI said it would appeal Wednesday’s ruling, saying it’s “confident of prevailing.”

The situation is similar to one that has unfolded in nearby Pennsylvania in recent years, where Sunoco Logistics Partners LP has battled landowners across the state over eminent domain for its Mariner East pipeline system, which already moves natural gas liquids from west to east there (see Shale Daily,Feb. 26). Sunoco is expanding the system and has largely prevailed in those cases. Under Ohio law, private companies can use eminent domain as long as it benefits the public.