Ohio-based Fairmount Santrol, which provides proppant products, including sand and sand-based services to exploration and production companies, is planning to raise up to $1.07 billion through a public offering, the company said in a filing Monday. 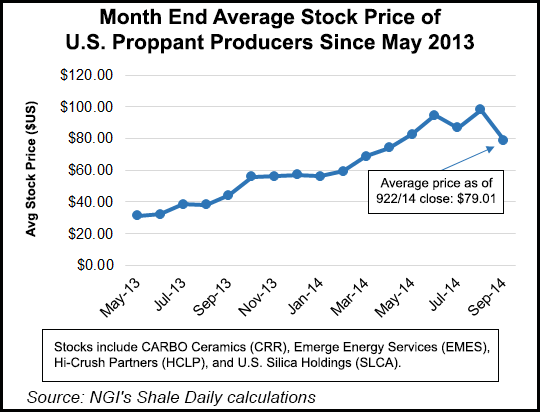 The Chesterland, OH-based company, backed by private equity firm American Securities LLC, expects to price up to 44.5 million shares at $21.00-24.00, it said in a Securities and Exchange Commission filing. American Securities would own a 37% interest in the company once it is public.

“We are experiencing high demand for our products and our business is currently experiencing significant growth,” the company said. “Our revenues have grown at a compound annual growth rate of approximately 19% and 25% since 2004 and 2009, respectively.

“Since 2011, our revenues have grown at a rate of 4%, as the market for resin-coated products softened. We have seen considerable strengthening in both the raw and resin-coated markets in 2014, and our revenues for the first six months of this year are up by 40% compared to the same period last year.”

Fairmount Santrol has applied to list its common shares on the New York Stock Exchange under “FMSA.” At the top end of the expected price range, FMSA would be valued at close to $4 billion. The filing did not indicate when the offering would be launched.

The board of directors currently is “in the process of reevaluating our executive compensation program in light of the additional responsibilities and duties our named executive officers will have as the executives of a publicly traded company,” the filing said. Effective this month, CEO Jenniffer Deckard’s base salary was increased to $450,000 from $374,900.

FMSA Holdings was founded in 1986 as Fairmount Minerals, and the Fairmount Santrol name was adopted in August. According to company documents, more than 1,000 people are employed worldwide. It produced and shipped more than 7.5 million tons of sand and sand products in 2013.

The company opened its seventh proppant terminal in the Midcontinent region in August in Ada, OK, in the South Central Oklahoma Oil Province, also known as SCOOP.

Fairmount Santrol may have missed the optimum window within which to issue its IPO. Share prices of proppant providers have skyrocketed over the last 16 months, but the last few weeks have been rough for the sector. The average share price of Carbo Ceramics, Emerge Energy Services, Hi-Crush Partners, and U.S. Silica Holdings closed at $79.01 on Monday, down 19.5% from their average close of $98.15 at the end of August.