A healthy surge in finalizing offshore oil and natural gas projects is expected next year and likely will topple the onshore unconventional industry as the leader in spending, an analysis by Rystad Energy indicates. 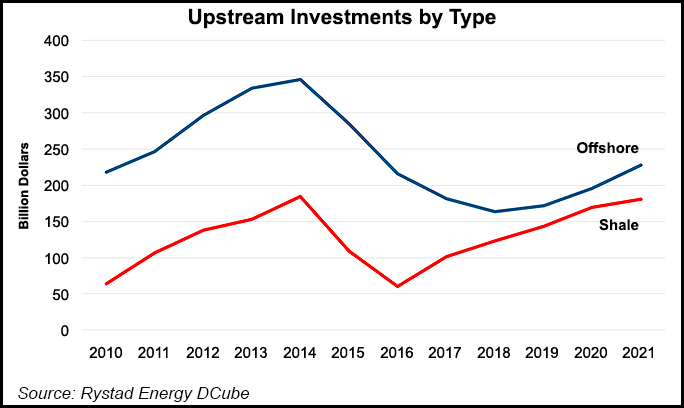 The plethora of recent final investment decisions (FID) for offshore projects is pointing to a robust future.

According to Rystad, last year there was a 50% increase year/year in the number of offshore projects sanctioned with 62 FIDs, followed by similar growth this year, with close to 100 projects likely to be sanctioned. Wood Mackenzie earlier this year also reported a doubling of upstream FIDs in 2017 from 2016, with most growth from the offshore and liquefied natural gas investments; more gains are expected this year too.

“Our offshore activity index is pointing to annual growth rates of about 6% toward 2022, thereby returning to the high activity levels seen in 2014,” said Audun Martinsen, head of oilfield research. “Coupled with annual service price inflation of 5%, offshore oilfield service purchases are projected to grow by 11% per year toward 2022.”

A unit of Royal Dutch Shell plc earlier this year FID’d Vito, a deepwater development in the Gulf of Mexico (GOM) that it estimates has a forward-looking, breakeven price of less than $35/bbl. The FID set in motion the construction and fabrication of a simplified host design and subsea infrastructure. At the start of the year, Shell had three deepwater projects in the GOM under construction: Appomattox, Kaikias and Coulomb Phase 2.

According to Rystad, the rise in offshore spending is going to coincide with a sequence of factors that could slow the growth for land-based spending, particularly for onshore completions activities that require sand and hydraulic fracturing (fracking).

In April, U.S. well fracturing activity surpassed 50 wells a day, but it has since flattened out at slightly above 50, Rystad data indicate. And while demand for frack sand in the United States is likely to grow at a compound annual growth rate of 21% from 2018-2021, consumption may be eclipsed by an even sharper increase in supply.
Rystad is estimating sand supply will increase by 47% this year and 27% in 2019, causing an oversupply that would negatively impact prices.

For example, Martinsen pointed to a lengthy list of in-basin sand mines underway in several U.S. producing areas, including the Permian and Denver-Julesburg basins, Midcontinent, and the Eagle Ford and Haynesville shales.

“Northern white sand prices have been declining rapidly, and we have observed Permian in-basin sand minegate prices falling below $40/ton,” he said.

The net effect, is that investment levels in unconventional plays “will grow at a slower pace than previously expected and end up at about $120 billion in 2018.”

Rystad is estimating about 22,000 onshore wells will be drilled and completed in North America during 2019, likely translating to about 16% growth in investments.

“Shale has thus lost some momentum at a time when investors have again found an appetite for the offshore domain, stimulated by a steep reduction in offshore costs and breakeven levels, which in turn have been driven by favorable unit prices,” Martinsen said.

Data indicated global offshore capital investments fell by 16% in 2017 and are projected to fall by another 10% this year, reaching only about $160 billion, which is less than half the $350 billion invested at the peak in 2014.

Offshore purchases, however, are projected to rise at an accelerating rate over the next three years.