Diamond Offshore Drilling Inc., mirroring recent comments by Noble Corp. plc and Ensco plc, is expecting volatility “for some time to come” for the offshore oil and gas industry, regardless of whether commodity prices have stabilized, CEO Marc Edwards said Monday. 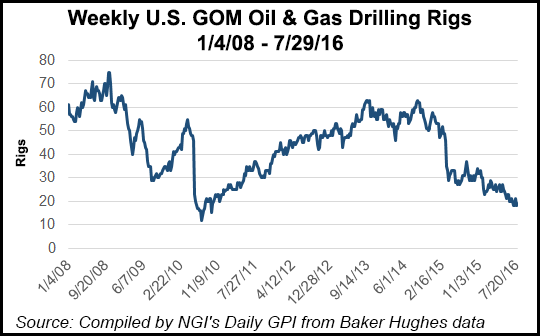 Stung by more than $678 million in impairment charges related to the carrying value of eight semi-submersibles and two mothballed rigs, the Houston-based contractor posted a net loss of $589.9 million (minus $4.30/share) in 2Q2016, versus year-ago profits of $87.4 million (64 cents). Total revenue slumped 17.4% to $388.7 million. Adjusted for one-time losses, Diamond exceeded Wall Street consensus forecasts by 12 cents/share by earning 16 cents, compared with profits of 64 cents a year ago.

During an hour-long conference call, Edwards lamented that even though oil prices appear to have stabilized, customers still are slashing capital expenditures (capex).

“In this past week alone, two large offshore players have further reduced 2016 investment spend,” Edwards said. “And we are estimating that our clients’ 2017 capex will further decline. This is in addition to the approximate 40% reduction that we experienced from 2012 to 2016. In conjunction with newbuilds, continuing trends of the market and contracted rigs rolling off contract, this has created the perfect storm for the drillers who are overexposed to the sixth-generation asset class.

“We may have seen a bottom in the oil price, but it is clear that volatility will be with us for some time to come.”

Some of the larger diversified oilfield service providers may have “declared a bottom in activity and are suggesting that a recovery is imminent. While this may be the case for certain onshore basins, it is not so for deepwater drilling. Utilization is still declining at almost 5% per quarter and contracting is essentially next to zero.

“Before we can declare a bottom, we at least need to see a level of fixture awards that matches a number of contracts that are reaching the end of their term. And for our industry sector, this has yet to happen.”

The oil and gas industry is cyclical and a recovery will happen at some point, said the CEO. “However, this time it is likely to be slow and protracted. Our clients will first have to fix their cash wheels, and then eliminate the partner drag that is holding back much of the current deepwater activity.”

Future hydrocarbon demand and the “commensurate supply stack” required to meet the demand suggest that into the next decade, “deepwater will have to deliver a level of incremental production that is equivalent to the entire portfolio that is currently produced from North American unconventionals today. Simply put, the long-term fundamentals for our business are and will remain intact.”

Diamond’s fundamentals continued to deteriorate through the first half of the year, CFO Kelly Youngblood said. Operating expenses doubled to $1.02 billion from $499.9 million on the impairment charges, with fleet efficiency at 92.7%, versus 98.2% in 1Q2016. Contracted drilling revenue fell 19.4% sequentially, while contract drilling costs declined 6.8%.

Three rigs completed their contracts during the second quarter, while one rig was warm-stacked (idled but operational) and undergoing rig enhancements before beginning a three-year contract for Hess Corp. early next year.

Although various service providers of late have expressed optimism going forward, “candidly, I think it’s still a pretty tough market, for us overall and for our peers,” Chief Commercial Officer Ron Woll said during the conference call. A “slight uptick” has been seen in the plug and abandonment (P&A) market, but that’s a function of the times, as it’s better to take care of obligations during a down market.

“If you move beyond the P&A piece of the market, I think we do see some operators rerunning their model, looking at low rig rates, looking at where commodity pricing is, what the production revenues are going to be. But I’d be careful…An operator rerunning a model is not the same thing as a signed contract…I do see some operators…stirring the pot on our analysis, but I wouldn’t extrapolate too far from that to we’re not taking signed contracts.”

During the downtime, Diamond, which is controlled by Loews Corp., is continuing to upgrade equipment and is attempting to overcome unplanned subsea stack pulls, Edwards noted. Under its new “pressure control by the hour” service model, it has its OEM, GE, at the table with clients to discuss upgrading BOP equipment. GE is “financially incentivized” to minimize unproductive time and maximize equipment availability. Under the 10-year contract, GE Oil & Gas has “full accountability” for BOP performance.

At the end of June the total contracted backlog was $4.4 billion, representing 28 rig years of work. Almost 86% of the available ultra-deepwater rig days for the remainder of 2016 were contracted. Utilization in the deepwater segment increased by 25% sequentially, driven by a contract until February 2018 in Australia at a rate of $285,000/day.

During Noble’s second quarter conference call, CEO David W. Williams said the “prevailing poor industry conditions” led the company to idle three floating rigs and one jack-up between April and June. Noble, whose U.S. offices are headquartered in Sugar Land, outside Houston, is one of the biggest Gulf of Mexico contractors.

“Our goal has always been to keep our most advanced, high-specification units active through the downturn. However, while we’re forced to manage periods of inactivity in this segment of our fleet, we will reduce daily costs as far as practical on each rig while maintaining a level of rig preservation readiness to allow an efficient response to opportunities that might appear in the short term.”

Noble has advanced more efficiencies since the downturn, reducing its contract drilling services costs to date this year by 8% to $900-925 million from a previous forecast of $975 million to $1 billion.

“Lower crew costs resulting from fewer fleet operating days, in addition to the continuation of cost management efforts, are largely responsible for the reduction,” Williams said. “Several of our premium rigs are currently inactive, and by deciding to warm or cold-stack the units during the inactive period, we’re able to effectively manage daily cost.”

Through July 22, the offshore industry had a total of 174 floaters under contract, or a market utilization of 73%, Williams said. “That compares to 75% in late April…The worldwide jackup fleet has 328 units under contract, or market utilization of 71% compared to the 73% referenced on our last call. It is clear we will need more time to work through the existing supply side surplus.”

“In the U.S. Gulf of Mexico, the outlook remains flat for now, but as I’ve noted before, the region has an abundance of production infrastructure with excellent hydrocarbon potential and a predictable business climate,” Williams said. “We believe these factors will confer an early-mover outcome to oil and gas companies participating in this basin relative to others when capital investment improves.

Noble’s total backlog at the end of June stood at $5.1 billion with contracts “extending out as far as 2023.”

The offshore industry eventually will rebound, said Williams. “The pace of activity for now is slow. But we think several factors are converging to support an improvement…We believe the oil market fundamentals are improving, with crude oil demand growing while production continues to decline. The underperformance of our customer base relating to reserve replacement in 2015 is not a sustainable model in the long term. Our customers are speaking more confidently about successful offshore project cost rationalization efforts. And hydrocarbon potential offshore is immense, attractive to both large and small producers…”

Ensco plc’s management team last week expressed a bit of enthusiasm about the longer term outlook for newbuilds. CEO Carl Trowell said the floater market is deteriorating quickly, noting that the past two years offshore drillers have said they would retire 61 floaters; nine alone were retired in the second quarter.

“When we then look at the active fleet, approximately 40 floaters, including most of the currently cold-stacked rigs, are over 30 years of age and idle without follow-on work. And another 30 rigs in the same age category will see their contracts expire by the end of 2017…Similar to floaters, we expect stacking of competitive jackups, defined as independent leg cantilever rigs, will continue.”

London-based Ensco, with U.S. operations based in Houston, has seven additional rigs it plans to sell for “scrap or permanently retire,” and “rig scrapping will be an important factor in helping to rebalance the rig market. We believe rig scrapping industry-wide will continue over the remainder of 2016 and into 2017.”

Managing the fleet today is paramount, Trowell said. Ensco is stacking uncontracted rigs to reduce costs and to preserve them for better market conditions. Using a “preservation” system, the contractor keeps a limited crew onboard to ensure a rig is ready to go as soon as possible.

“We remain optimistic about the medium- to long-term prospects for our sector and are conducting early planning for the eventual upturn in the market,” he said. “While we have recently seen customers early terminate rig contracts, we’ve also seen some incremental positive developments, including customers approving new drilling programs to put rigs back to work” overseas.

Some exploration and production customers also have indicated “that breakeven economics for deepwater projects have improved through re-engineering and cost deflation,” Trowell said. “And we have seen some positive commentary on certain programs which were previously delayed and may be getting closer to final investment decision approval in regions like the U.S. Gulf of Mexico, the Mediterranean and offshore Africa.”

Ensco also is seeing some requests for information, which would be a “precursor to future drilling programs as customers evaluate rig availability and technical information for projects in the coming years. We believe that these are early signs that the unprecedented pullback in customer spending is having an impact on customers’ production as they evaluate their portfolios longer-term…

“However, as I’ve stated previously, we expect that utilization in day rates will continue to move lower over the second-half of 2016, as more rigs roll off contract without follow-on work.”