Natural gas futures wavered between gains and losses much of Wednesday before clawing out a modest gain as markets mulled positive export data against the prospects of cooler weather, a potentially bearish storage report and fall containment concerns. 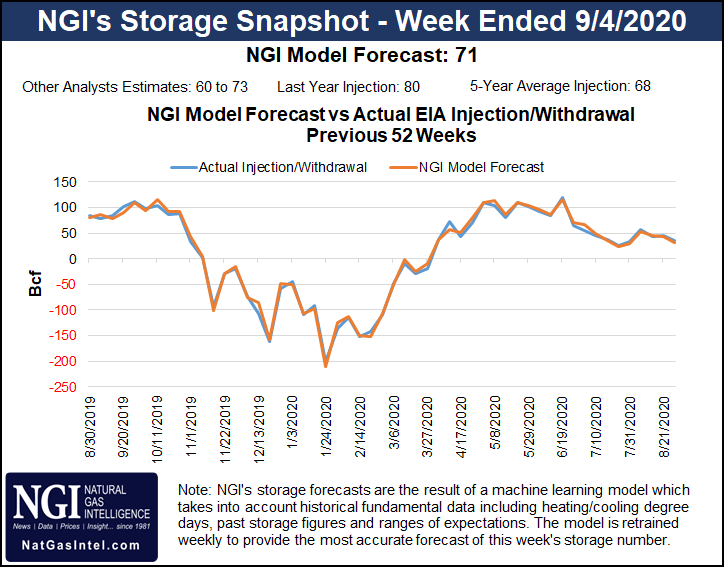 Coming off an 18.8-cent drop a day earlier, the October Nymex contract on Wednesday climbed six-tenths of a cent day/day and settled at $2.406/MMBtu. November, however, fell 1.9 cents to $2.873.

The front month rallied early in the day on encouraging U.S. liquefied natural gas (LNG) export news. Feed gas flows at Cheniere’s Sabine Pass export terminal, which had previously been idled by Hurricane Laura in late August, jumped above 2 Bcf Tuesday. That pushed the total for all Lower 48 terminals above 6 Bcf, “higher than we have seen since the middle of May,” Bespoke Weather Services said.

An LNG vessel was berthed at Sabine Pass on Wednesday and was the first expected loading in the wake of Laura, according to ClipperData. The last loading witnessed from the terminal was Aug. 23. Feed gas supply to Sabine Pass rose to 2.84 Bcf/d Wednesday, “pointing to the resumption of exports,” ClipperData noted.

The Cameron LNG export facility in Louisiana, however, remained offline and flows to the facility were stuck at zero as trading got underway Wednesday. EBW Analytics Group said traders were concerned the facility might not resume normal operations for several more weeks as crews in the Lake Charles area of Louisiana work to restore power following Laura. EBW said the worries were likely overblown.

“While restoring power to the Lake Charles area could take up to two months, Cameron is on the outer edge of the affected area,” EBW said. “Power can be restored while the rest of the system is still being rebuilt. Some observers believe the required work could be completed in one to two weeks.”

Continued LNG improvement is widely viewed as important to ward off storage challenges as summer fades and domestic cooling demand begins to ease. “Certainly, if we can sustain this level of LNG the balance of the month, that could be enough to lessen the risks of containment,” Bespoke said.

Over the next two weeks, temperatures are not expected to prove hot enough to get air conditioners cranking in most regions of the Lower 48, according to NatGasWeather.

For the next week, the forecaster said, “an unseasonably cool weather system continues across the Rockies and Plains with rain, snow, and highs of only 40s to 60s, including highs of 50s to 70s into North Texas. The East will be warm to very warm with highs of 70s to low 90s, while hot over the West in the upper 80s to 100s, but not as hot as recent days. Temperatures will warm back into the 60s to 80s over the Midwest and central United States late in the week as cool shots fade.”

Looking into the second half of the 15-day forecast, NatGasWeather said, “a comfortable pattern is expected across much of the United States with highs of 70s and 80s,” pointing to “light national demand.”

EIA last year recorded an 80 Bcf build for the similar week, and the five-year average is an injection of 68 Bcf. EIA reported 35 Bcf injected into storage for the week ended Aug. 28.

Looking ahead to the winter season and heating needs, EIA said demand for natural gas is likely to increase domestically and overseas, while production tapers off, providing catalysts for Henry Hub spot prices to reach an average of $3.40 in January.

Spot gas prices on Wednesday, however, trended lower across much of the country amid the unseasonably cool weather in the nation’s midsection.

While California firefighters continued to battle blazes amid ongoing heat and strong winds, and as residents grappled with rolling blackouts, temperatures on Wednesday declined from the record highs set earlier in the week, enabling crews to bring back power.

San Francisco-based Pacific Gas and Electric Co. early Tuesday had shut off power to an estimated 172,000 customers in 22 counties to minimize further wildfire risks. Spot gas at key California hubs prices plunged Tuesday. However, the utility expected full power restoration for all customers by the end of Wednesday, and spot prices recovered in the Golden State.