Natural gas futures on Friday dipped lower for a second consecutive day as traders mulled forecasts for milder temperatures, the specter of easing demand and the potential for stronger storage injections ahead. 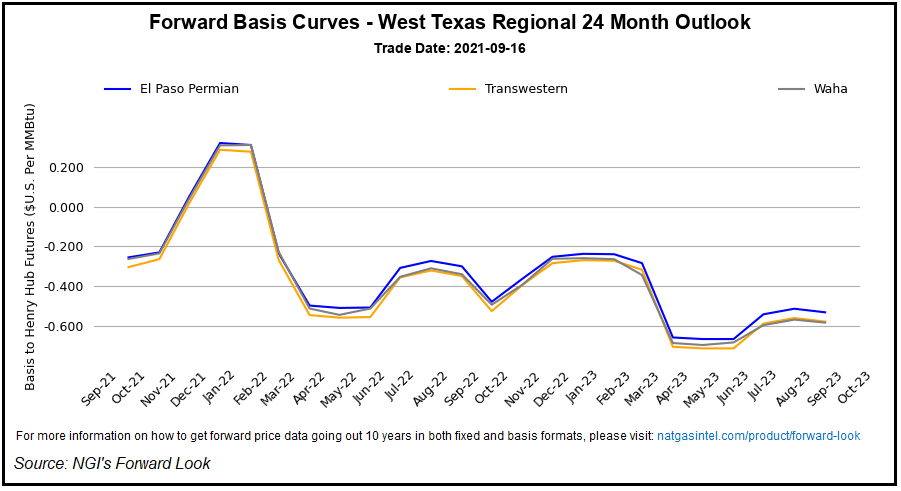 Weather forecasts for the remainder of September shifted bearish again Friday – after shedding several cooling degree days (CDD) on Thursday – signaling the potential for solid increases to stockpiles in the coming weeks. This calmed fears of a low storage trajectory ahead of the peak winter demand season. Such fears had fueled a major rally earlier in the week that lifted futures to 2021 highs.

“The reduced CDDs outweigh any minor” gains in heating demand, “giving us a slightly lower demand look, overall, and a below normal demand pattern, in total, for the balance of the month,” Bespoke Weather Services said Friday.

The firm said the outlook for October, meanwhile, showed above average temperatures, though at that time of year, warmth translates into mild temperatures that galvanize neither heating nor cooling demand.

“It is still early in the weather game, but these trends will start becoming more important the next couple of weeks,” Bespoke said. The latest forecast was “not enough to end the bull story, but, in our view, is pushing things to the point where we will need to see some decent cold” to consistently support futures above $5.00 this fall. “Until we see the weather, volatility likely rules.”

U.S. liquefied natural gas (LNG) export levels also declined during the past week – down more than 2 Bcf/d from the prior week – after Hurricane Nicholas struck the Gulf of Mexico (GOM) and knocked out power at the Freeport LNG terminal near Houston.

If mild conditions prevail in coming weeks and utilities add similar levels to stockpiles, Bespoke said the market would be on track for 3.5 Tcf in underground supplies for winter. That is well below the year-earlier level of about 3.9 Tcf, but the firm said it could prove sufficient barring an extremely cold winter.

In addition to overshooting estimates, the latest build also fell to the bearish side of the five-year average for the period, analysts at Tudor, Pickering, Holt & Co. (TPH) said. U.S. stockpiles ended the period at a roughly 7% deficit to the five-year norm.

“Our projections suggest the natural gas market may continue to trim the deficit for most of September, following the post-Nicholas downturn in LNG feed gas demand” and “recent weather forecast shifts pointing to a more bearish outlook for late September and early October,” EBW Analytics Group said.

That noted, production held around 92 Bcf/d much of the summer and dropped to around 90 Bcf in the wake of Hurricane Ida in late August. Output disruptions in the GOM have persisted through the first half of September. Additionally, the recent LNG decline is expected to be temporary. Demand for LNG exports to fuel energy needs in Asia and Europe remains elevated and is expected to sop up more supply this fall as both continents grapple with supply challenges.

Some analysts said if weather demand re-emerges, and production remains modest, storage worries could quickly bubble up again. Analysts at The Schork Report noted Friday that an inevitable LNG rebound in coming weeks will bolster overall demand and likely prices.

NatGasWeather offered a similar assessment Friday: “To the bullish side remains tight global supplies, especially in Asia and Europe, a situation that isn’t expected to improve much the next few months. This makes this coming winter season the most highly anticipated in more than a decade across the Northern Hemisphere. Bulls are obviously hoping a colder than normal winter comes to fruition since it could send prices skyrocketing even further.”

Spot gas prices extended a downward slide to a second day, with hubs across the country posting losses.

NatGasWeather said Friday forecasts pointed to steady weather-driven demand through the weekend and into the start of the next trading week. However, by midweek and through the remainder of September, most of the United States is expected to experience “perfect highs of 70s and 80s besides locally hotter 90s across the Southwest and cooler 60s over the Northern Plains.”

With that on the horizon, cash prices retreated from lofty highs reached earlier in the week.

For the week ahead specifically, NatGasWeather said the Midwest and Northeast “will be comfortable with highs of 70s to 80s as weak cool fronts track through with showers,” while California to West Texas will be hot “with highs of upper 80s to 100s as high pressure rules.”

In the final week of the month, the southern part of the country is projected to be warm – though pleasant with highs in the 80s in many markets – and the Midwest to Northeast are forecasted to experience mild temperatures in the 70s and low 80s. While still hot in the Southwest and parts of California, the Northwest and Rockies “will be mild and showery early with highs of 60s-70s as Pacific systems track through,” NatGasWeather said.

Overall, the forecaster said, “weather patterns are quite bearish the next 15 days for the lightest national demand in months.”

“As far as the tropics,” the firm added Friday, “Nicholas has fizzled but there remain a couple other tropical systems of interest, with one grazing the Mid-Atlantic Coast the next couple days, while a second system tracks toward the Caribbean this weekend,” but it is “unlikely to hold a course toward the U.S.”