Natural gas futures on Wednesday rebounded in force after a steep slump earlier in the week, bolstered by signs of a liquefied natural gas (LNG) recovery, forecasts of greater weather-driven demand and new storage estimates that indicated containment worries may have been overblown. 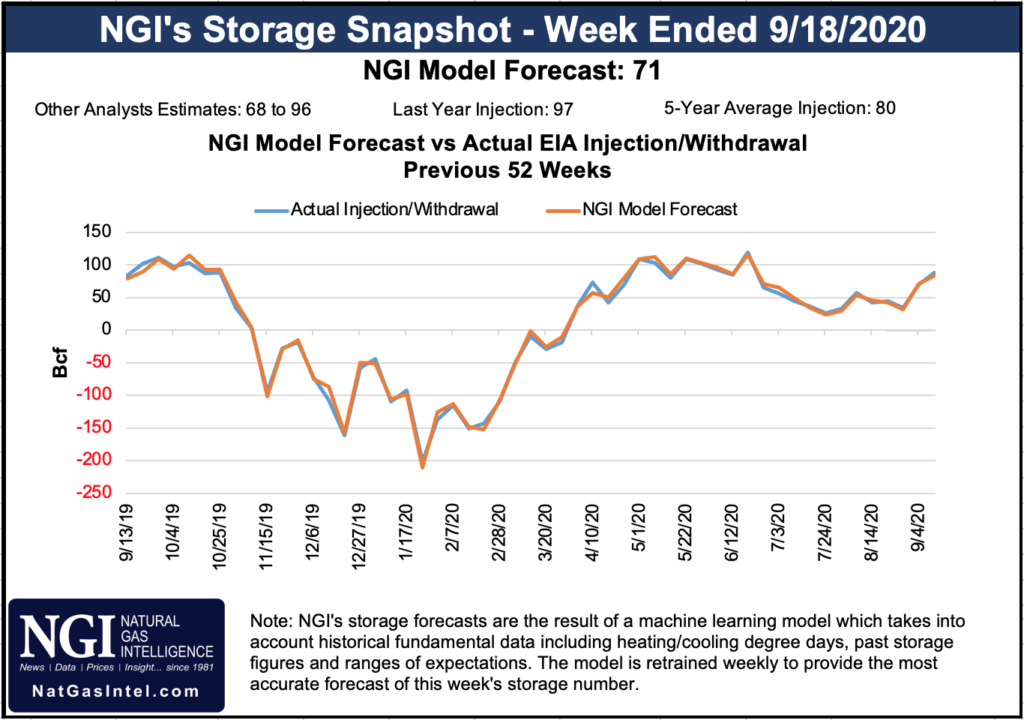 The October Nymex contract popped 29.1 cents day/day and settled at $2.125/MMBtu. The prompt month had plunged more than 20 cents over the two previous trading sessions. November, meanwhile, also bounced back Wednesday from a substantial drop the prior day and gained 19.7 cents to $2.794.

Additionally, in what analysts say reflects anticipation of a winter rally as more Americans burn gas to heat their homes and businesses, futures for delivery in December through March continued to trade above $3.000.

Futures tumbled on Monday and finished flat the next day as traders assessed a drop in LNG volumes amid turbulence imposed by an exceptionally active storm season in the Atlantic that, again this week, interrupted business in the Gulf of Mexico. Feed gas flows hovered near 8.0 Bcf late last week, but early this week Tropical Storm Beta temporarily hindered flows to Gulf Coast terminals and LNG volumes dropped below 4.0 Bcf Tuesday. The storm also brought strong winds and flooding to the Texas coast, curbing cooling demand.

But Beta weakened as it moved inland, and its impacts were not expected to last long. LNG volumes were back above 4.0 Bcf Wednesday, and markets were anticipating continued momentum this week. At the same time, the weather outlook improved for gas demand.

Bespoke Weather Services said Wednesday that a strong upper level trough was projected to dive into the entire eastern half of the nation over the next week, with heat persisting in the West. The “impressive early shot of chill” could get furnaces running, while heat in California and the Southwest continue to drive air conditioner use. Together, the outlook “is enough to place demand above normal next week on the national level.”

But concerns were eased some Wednesday with new analyst estimates.

Last year, EIA recorded a 97 Bcf build for the period, and the five-year average is an injection of 80 Bcf.

“Tomorrow’s EIA print is expected to draw more interest than usual, as market participants gauge whether last week’s larger-than-normal print was a one-off anomaly or reflective of a looser market,” analysts at Tudor, Pickering, Holt & Co. (TPH) said in a note to clients Wednesday. “We think it was more of a one-off and are looking for a build of 70 Bcf this week, which would align with our supply/demand balances.”

If, however, the build tops median estimates again, “we expect more pressure on the front end of the curve,” the TPH team said.

Looking ahead, traders are anticipating a normal winter, steady heating demand domestically and a resumption in consistent U.S. LNG export needs in Asia and Europe. While the pandemic remains a blaring wild card, should economies gather more momentum in coming months, industrial energy demand could also rise and support prices later in 2020 and into next year.

“Bullishness is best expressed in the winter contracts as of right now,” Bespoke said.

Strong heat in the West and shots of heat in the Midwest this week could be followed over the next week to 10 days with continued lofty temperatures in California and into the Southwest.

“The forecast trends additionally hotter in the West, where places like Phoenix and Sacramento challenge daily records,” Maxar’s Weather Desk said. “Much above-normal temperatures are common in the region, under a ridge that builds northward along the coast with time.”

Heavy showers continued along parts of the Gulf Coast Wednesday as remnants of Beta gradually blew eastward, leaving major markets such as Houston with temperatures in the 70s. However, heat was expected to return before the weekend.

In the East, where recent curtailments and planned maintenance have resulted in lower production, prices were broadly up, as well. Iroquois Zone 2, for one, climbed 30.5 cents to $1.865.