October bidweek pricing took on the look of an Elvis Presley concert and came out “All Shook Up” as most points nationally were generally a nickel or so on either side of unchanged. At the extremes, however, sellers on Algonquin Citygate and Tennessee Zone 6 200 L enjoyed 72-cent and 71-cent boosts, respectively, to average $3.37 and $3.44, while buyers reveled in a 22-cent drop at SoCal Border to $4.01. The NGI October National Bidweek Average came in at $3.55, up a nickel from September, and 11 cents higher than October 2013’s National Bidweek Average. 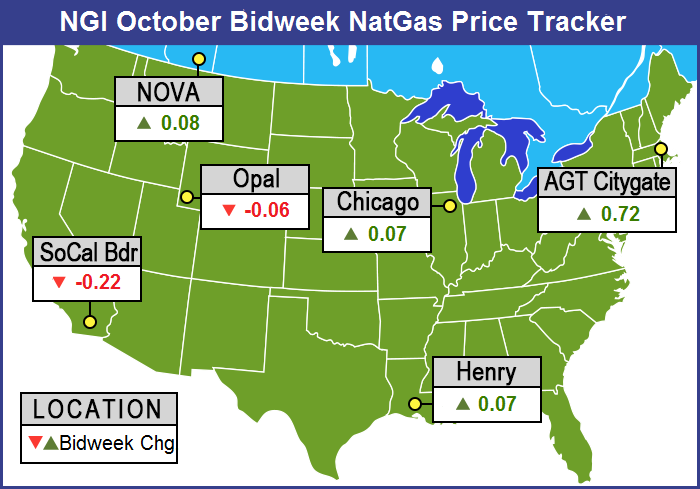 Because October is a shoulder month, prices nationally were a mix of red and black as producers, utilities and marketers jockeyed for position ahead of the 2014-2015 winter heating season. In the Northeast, quotes at actively traded points swung wildly from the 72-cent gain seen at Algonquin Citygate to $3.37, to the nickel loss experienced at Tennessee Zone 5 200 L at $2.36.

In the Rocky Mountains, only one actively traded point made it into the plus column, Northwest Sumas, with an 8-cent gain to $3.93, while El Paso Non-Bondad brought up the rear with a 14-cent decline to $3.74.

Sellers who indexed their deals to the screen didn’t quite do as well as the NGI National Bidweek Average. October futures settled at $3.984, up just 3.7 cents from the September contract settlement.

In something of a statistical anomaly, the Henry Hub came in at $4.06 for October, despite the fact that all other South Louisiana points averaged less than $4.00, and even though the October Nymex contract went off the board at $3.984. “Normally, the potential to take advantage of arbitrage conditions forces the Henry Hub Bidweek Index to come in within a penny of the prompt month settlement price for any particular month, but NGI‘s October Henry Hub index is more than 7 cents above the October Nymex settle,” said Patrick Rau, NGI director of Strategy & Research. “We believe the reason for the difference this month is a lack of physical trading at Henry before the October Nymex contract went off the board on September 26. Most of the October deals NGI received were conducted on September 29 and 30, after both spot market and futures market prices had firmed.”

The scrambled October bidweek was as equally varied as the approaches of various market participants. A Michigan marketer locked in on a number of deals as the October contract expired, but others thought traders during October would use more spot deals. “Prices are going up and we paid from 13-15 cents over Nymex on Consumers and Michcon,” said a Michigan marketer. “We pulled the trigger on a number of deals for our customers before the close, and we came out a little better than if we had priced at the settlement.”

The marketer said they had already done a number of winter deals, “but we haven’t covered every single customer. If our customers had priced back in July as we suggested they would look a lot better. We threw prices at them and they didn’t move on them so what do you do?

“We were told by a Consumers employee that their weather experts were indicating a cold winter for Michigan. The general take on it is that it would be as bad as [the Polar Vortex of] last year.”

A San Diego-based gas buyer for an independent power generator didn’t see much in the way of indexing. “Maybe when we come to November that [indexing] becomes a play, but I think for this month, traders are going a little light on indexing. They will need the daily market to do that, and every time that happens the dailies tend to be a little more bid because everyone is in the same boat trying to buy.

“It just makes sense to do that if you think this [market strength] is just a short term event to the upside. Baseload when you think prices are going to come off,” he said.

A Rocky Mountain producer wasn’t doing much bidweek trading at all. “We had to hedge 85% of our production in order to do a bank refinancing so bid week doesn’t make much difference to us. The July EIA 914 report showed July production up 4.6 Bcf/d from last July. Prices back in the Marcellus are less than $2.00 in some cases. I just don’t think $4.00 is sustainable except on a weather-type deal,” he said.

One such market point that had to suffer the indignity of sub $2.00 pricing was Dominion South in last week’s daily gas trading. Dominion South’s October Index came in at $2.04, unchanged from September, but last Friday spot gas prices at several eastern points continued to grope for new lows. The heavily traded Dominion South point fell to $1.57 in Friday for weekend trading, the lowest point since it languished at $1.17 in December 1998.

Analysts said the plunge in not only Dominion South but other eastern points “doesn’t come as much of a surprise. Ever since [Tennessee] Zone 4 Marcellus started showing up as a price hub, we’ve been seeing a lot of downward pressure on those Appalachian production prices because there are so many wells that have been drilled but not completed because there is not enough capacity to take the gas to market,” said Genscape Inc. Senior Analyst Rick Margolin.

Could history repeat itself and Dominion South sellers enjoy rising prices from $2.00 in 2015 if a strong screen provides the lift off? Dominion South and the screen danced higher throughout 1999.

One school of thought is that improved pricing for Dominion South and the Marcellus region in particular may depend on hardware. “As of now there is simply not enough demand in either the Northeast or Southeast where people want to start backhauling to. We are not going to see a whole lot of support for those prices until we see some structural shifts in demand such as LNG, and additional coal to gas switching. Basically what you are seeing in the Northeast now is analogous to what was happening in the Rockies pre REX,” said Margolin, referring to the Rockies Express Pipeline.

As bidweek drew to a close, Tuesday gas for next-day delivery rose at nearly all market points with the Northeast posting double-digit gains, and more widespread gains of a few pennies were seen in the Mid-Atlantic, Marcellus, and Appalachia areas. Other producing regions were also solidly in the black. Overall the market added an average of 6 cents to $3.79.

In the futures arena, November failed to breach an important resistance point on Tuesday and settled down 3.3 cents at $4.121. December eased 3.7 cents to $4.190.

Algonquin Gas Transmission reported that it had restricted interruptible and secondary out of path nominations to 99% between its Cromwell and Burrillville compressor stations. Monday the restriction was at 92%. “No increases in nominations sourced from points west of Cromwell for delivery to points east of Cromwell, except for Primary Firm No-Notice nominations, will be accepted,” the company said.

AccuWeather.com meteorologists reported that “fall air will erase the record warmth that has been gripping the Northeast, while chilly air is set to charge into the Midwest by week’s end. The chilly air will follow a couple of potent storm systems taking aim on the North Central States.” The first system is expected to bring locally severe storms to parts of the Rockies and Plains through Tuesday, and the second storm was to bring cool, drenching rain to the Upper Midwest.

“The autumn winds that follow that front will be noticeable as we have not had many events like this yet since the start of meteorological fall: Sept. 1,” AccuWeather.com meteorologist Elliot Abrams said.

“While it will not get cold enough for snow around the Upper Midwest to the central Appalachians, there will be bands of angry looking clouds and rain downwind of the Great Lakes, known as lake-effect. By Saturday, [wind chill] temperatures may be held to the 40s much of the day around the Great Lakes and central Appalachians. By Sunday, [wind chill] temperatures may be in the 50s at times farther to the east.”

A Rocky Mountain producer is not optimistic that prices will advance. “Bentek says November and December we’ve got 2 Bcf/d of new pipeline capacity coming out of the Marcellus. Maybe we can get a rally between now and then, but Bentek says there are 1,800 completed wells in the Utica and Marcellus waiting for pipelines.

“I just don’t see $4.00 as sustainable. Maybe on a weather type occurrence or something, [and] Thursday’s injection number is huge at about 105 Bcf. Total storage is less than last year, but that deficit is dropping like a rock,” he said.

The Energy Information Administration reported Tuesday that total Lower 48 gas withdrawals had increased a stout 4.61 Bcf/d to 79.08 Bcf/d from July 2013 to July 2014.

Analysts question whether another series of winter price spikes may be on the horizon inasmuch as Producing Region output is decreasing, and pipeline deliverability for the most part remains configured to bring supplies from the Producing Region to markets in the Northeast. In all likelihood, increased Marcellus capacity won’t be able to make up a severe weather driven deficit.

“Until last winter, price spikes for spot gas deliveries had largely been relegated to just a few constrained Northeast trading points. This dramatically changed as gas utilities across the country scrambled to secure supplies to meet the surge in heating demand in January,” said Teri Viswanath, director of commodity strategy for natural gas trading at BNP Paribas in a note to clients.

“The resulting stampede for physical supplies lifted cash prices in every reporting region, with locations in the Northeast, Midcontinent and Midwest regions reporting new all-time highs. The cause of the coast-to-coast price spike was the systematic reduction in swing supplies. This year, with the Producing region remaining understocked going into the winter, another system ‘stress-test’ might develop.”

Analysts saw something of a weather-driven price spike Monday. “Although we had left open the possibility of an advance in the newly prompt Nov contract to the $4.16 area, we didn’t expect such a run to develop this early,” said Jim Ritterbusch of Ritterbusch and Associates. “Strength is mainly weather driven as most forecasters are looking at significantly below normal temperature trends to begin later this week and extend toward mid-October in some cases.

“The elevation in HDDs [heating degree days] appears sufficient to stall the dynamic of deficit contraction that has provided the primary theme behind our bearish stance until recently. We have shifted to a neutral posture in anticipation of some wide price swings but with the market likely to show little change from the $4.00 mark a week or two down the road.”

Forecasters are debating as to how much cold air will actually make it south. “The weather models are still struggling on just how much cold Canada air will be tapped by the next series of weather systems that begins to play out later this week over the northern U.S.,” said Natgasweather.com. “The uncertainty is expected to lead to varying national temperature forecasts, especially after October 8. As we have been mentioning, these cool blasts will drive stronger heating demand, but they aren’t exceptionally cold, at least when considering it in terms of standard deviations. So while we suspected this coming cooler pattern would generate market hype, it’s likely not quite intimidating enough to bring a sustained and prolonged rally.”