The Heartland Greenway carbon capture and sequestration (CCS) pipeline, a 1,300-mile system that would traverse five Midwestern states, has snagged a top Iowa fertilizer company as a customer, according to Navigator CO2 Ventures LLC. 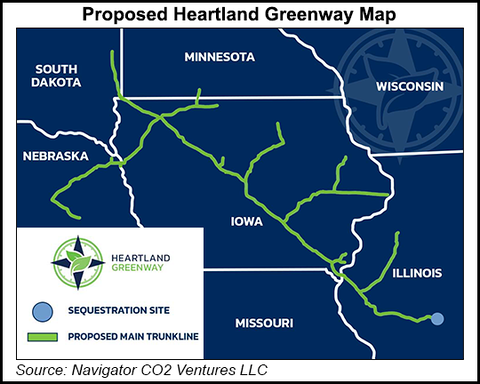 Under the agreement with Dutch fertilizer giant OCI NV, Navigator would transport and sequester up to 1.13 million metric tons/year (mmty) of carbon dioxide (CO2) for the Iowa Fertilizer Co. (IFCo) unit.

Heartland, sanctioned in October, would transport and sequester up to 15 mmty from industrial customers in Illinois, Iowa, Minnesota, Nebraska and South Dakota.

“OCI is a global leader in the ammonia and nitrogen fertilizer industries — an important component of agriculture — and forward thinking in their plans for decarbonization,” Navigator CEO Matt Vining said. “State-of-the-art nitrogen producers like OCI play a critical role in decarbonizing the agricultural supply chain, as well as industrial feedstocks and fuels, and we look forward to advancing a greener future together.”

IFCo, Iowa’s largest fertilizer plant, was the first greenfield world-scale nitrogen fertilizer plant built in the United States in nearly 30 years. When the CCS infrastructure is installed, the Heartland project would capture and store nearly all of the facility’s emissions.

What About 45Q Incentives?

Start up for the first phase of the two-phase Iowa project, to move and sequester up to 500,000 metric tons/year of CO2, is expected by the end of 2024. The second phase, for the balance of the CO2 emissions, would be subject to “regulatory enhancements” of the Internal Revenue Service’s Section 45Q tax incentive, which provides credits for CO2 sequestration. Tax incentives would “make installation of the required post-combustion capture equipment economically feasible,” Navigator noted.

The Heartland system “allows for an effective and quick solution to reduce our CO2 footprint and offer low carbon products to our customers across the value chain from our world-scale facility in Iowa,” said OCI CEO Ahmed El-Hoshy. “We are monitoring the ongoing discussions in Congress around enhancements to the 45Q program to support the project economics and potentially open the opportunity to widen the scope of this project to capture more CO2.

“This agreement follows the announcement earlier this year that we have the ability to produce up to 365,000 metric tons/year of blue ammonia at OCI Beaumont in Texas, and blue and green ammonia projects in Abu Dhabi and Egypt, and marks another milestone towards achieving our sustainability goals and progressing towards a greener future.”

Heartland is anchored by Valero Energy Corp. and sponsored by BlackRock’s Global Energy & Power Infrastructure Fund III. Navigator said it was working with other industrial processing plants in the Midwest “to adopt a more sustainable approach” to reduce their carbon footprints.