Navigator CO2 Ventures LLC said Thursday it has binding commitments in hand to sanction the massive Heartland Greenway system, a 1,300-mile carbon capture pipeline that would traverse five states across the Midwest. 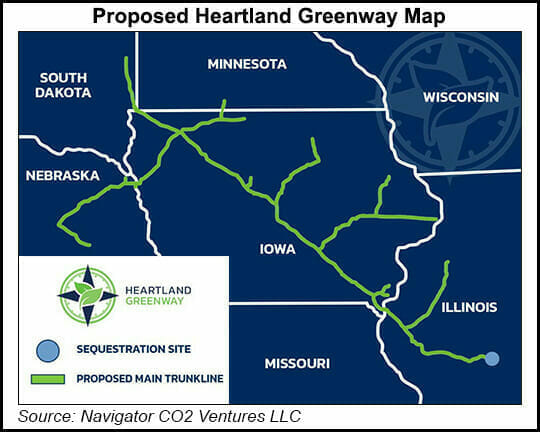 As initially designed, Heartland would transport and sequester up to 15 million metric tons/year of carbon dioxide (CO2) from industrial customers in Illinois, Iowa, Minnesota, Nebraska and South Dakota.

“The Heartland Greenway is the first substantial, fully integrated CO2 handling system to reach a final investment decision, and we could not be more excited for the path ahead for all stakeholders,” said Navigator CEO Matt Vining. “It is a great privilege and responsibility to help pave the way for large scale infrastructure projects designed to reduce greenhouse gas emissions in a material way. We are thankful for the opportunity to serve our customers and investors who have entrusted us with the task ahead.”

Valero Energy Corp. and a unit of BlackRock Inc. in March teamed up with Navigator Energy Services to develop the industrial-scale CO2 pipeline. Navigator in June said an open season already had drawn enough support to make it a go. Navigator in July lined up contracts with Tenaska, Advanced Resources International (ARI) and Chabina Energy Partners LLC to move toward a final investment decision.

Based upon the “substantial market reception” Navigator said it is “evaluating multiple opportunities to expand the Heartland Greenway’s available capacity and add service offerings for the benefit of its current and future customers,” the management team said.

With board approval, Navigator now is working to obtain “all the necessary permits” to begin construction, with initial commissioning beginning late in 2024 and into early 2025.

In addition to taking initial steps for Heartland, Navigator also is “actively creating incremental capability to allow its customers to maximize the value of their commercial participation.”

Plans are underway to create an affiliated marketing company that would assist customers with tracking emissions and monetizing their environmental attributes. The company also is in discussions with “multiple parties that consume CO2” that may want delivery interconnection points for a ratable, consistent source for their CO2 takeaway.

“In addition to providing best-in-class service for our customers, designing and constructing a multi-dimensional system that opens up new markets is key for our customers’ ability to maximize value,” Vining said. “This is the first inning of a long game, and we are 100% aligned with our customers’ focus on executing a highly scalable platform that can respond to increasing customer demand and industry change.”

Heartland initially is to have nearly 20 receipt points. In parallel, “multiple permanent sequestration locations are being actively developed in south-central Illinois,” where the system would use specific intervals of the Mount Simon formation to safely and permanently sequester the CO2. Mount Simon is a sandstone formation that extends across Illinois and into Indiana, Kentucky, Michigan, Minnesota, Ohio and Wisconsin.

Navigator said its “current and future customers” include many “rural value-added” agriculture processors from the ethanol and fertilizer industries. The management team said it also was continuing its multi-year commercial partnership with Valero as the system’s anchor customer.

Work being performed by affiliates of Tenaska and ARI is “well underway,” management said. The work is positioning the system to be able to submit the Environmental Protection Agency Class VI permit applications soon.

Navigator said it also plans to hold a series of public meetings across the project’s footprint in late 2021 and early 2022. Virtual participation would be offered to provide input from stakeholders and interested parties.