In his acceptance speech for the Democratic nomination for a second term, President Obama Thursday said Democrats were offering the nation a “better path” on energy — one that will continue to focus on renewable energy, develop abundant natural gas supplies, give producers more access for domestic onshore oil and gas exploration, reduce foreign oil imports and cut carbon pollution.

“We doubled our use of renewable energy…In last year alone, we cut oil imports by one million b/d, more than any administration in recent history,” he said at the Democratic National Convention in Charlotte, NC.

“Now you have a choice between a strategy that reverses this progress, or one that builds on it. We’ve opened millions of new acres for oil and gas exploration in the last three years, and we’ll open more.” While domestic oil and natural gas production has risen significantly in recent years, producers and Republicans contend that it’s not the result of Obama energy policies but rather in spite of them.

“Unlike my opponent [Republican candidate Mitt Romney], I will not let oil companies write this country’s energy plan, or endanger our coastline, or collect another $4 billion in corporate welfare from our taxpayers,” Obama said. Democrats are opposed to allowing leasing off certain coasts: East Coast, West Coast and in some Alaska offshore regions (see Daily GPI, Sept. 5). They also seek to cut $4 billion in tax incentives from producers over the next decade.

“We’re offering a better path [than the Republicans], a future where we keep investing in wind solar and and clean coal; where farmers and scientists harness new biofuels to power cars and trucks; where construction workers build homes and factories that waste less energy; [and] where we develop a 100-year supply of natural gas that’s right beneath our feet.”

The American Gas Association (AGA), which represents natural gas utilities, lauded the president remarks on natural gas. “President Obama outlined a path towards robust development of America’s abundant natural gas supply and a full realization of the benefits of this clean energy source. The president envisioned a future where we ‘choose the path where we control more of our own energy.’ I agree that is the path to choose, and natural gas provides us with that opportunity,” said AGA CEO Dave McCurdy.

Moreover, the Democratic energy plan “will continue to reduce carbon pollution that is heating our planet because climate change is not a hoax,” Obama said.

“If you believe that new plants and factories can dot our landscape; that new energy can power our future…then I need you to vote this November.”

Last week Romney unveiled an energy plan that he said would open more federal lands to oil and gas drilling and would make North America energy independent by 2020 — the final year of his second term in office — if he is elected this November.

Romney’s plan is focused on North American oil, gas, coal and nuclear energy, with only a passing nod to solar, energy and other renewables (see Daily GPI, Aug. 24). 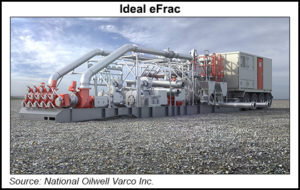