The Obama administration issued a broad spectrum plan Wednesday for the oil and gas industry to cut methane emissions from new and modified sources by 40-45% below 2012 levels by 2025. 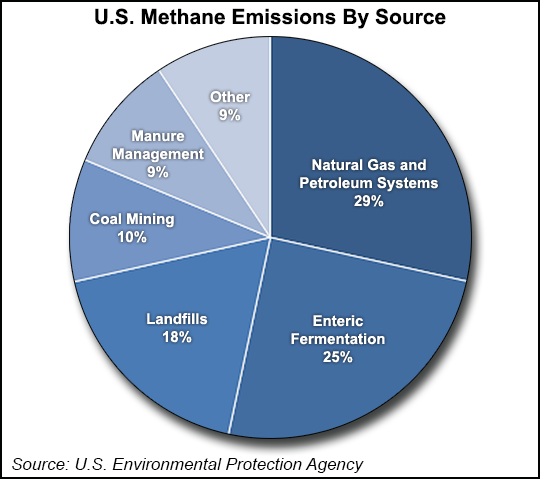 The plan involves a number of federal entities, and while it appeared to be a crackdown on the industry, it also could be read as an endorsement of the continuing use of fossil fuels, particularly natural gas, with controlled emissions. It is also an administration acknowledgement that the renewables industry alone cannot power the nation. The main regulatory proposals are expected to come from the U.S. Environmental Protection Agency (EPA) this summer, followed by final regulations in 2016.

The president also is to propose, for fiscal year 2016, $25 million in funding for the Department of Energy (DOE) — $15 million to develop cost-effective technologies to detect and reduce losses from natural gas transmission and distribution systems, and $10 million for a DOE program enhancing the quantification of emissions from natural gas infrastructure.

While the administration acknowledged that methane emissions from the oil and gas sector were down 16% since 1990, citing “significant reductions from certain parts of the sector, notably well completions,” it added that, left unchecked, emissions from the sector are projected to increase more than 25% by 2025.

“The steps announced [Wednesday] are also a sound economic and public health strategy because reducing methane emissions means capturing valuable fuel that is otherwise wasted and reducing other harmful pollutants — a win for public health and the economy,” the administration said. “Achieving the administration’s goal would save up to 180 Bcf of natural gas in 2025, enough to heat more than two million homes for a year and continue to support businesses that manufacture and sell cost-effective technologies to identify, quantify, and reduce methane emissions.”

President Obama is to deliver his State of the Union address on Tuesday (Jan. 20). According to reports, he could use the speech as another opportunity to promote the methane reduction plan (see Shale Daily, Jan. 13).

The administration first released a strategy to reduce methane emissions last March, giving oversight to the EPA and DOE (see Daily GPI, March 28, 2014). The original plan called for the EPA to assess emissions from the oil and gas sector, while the BLM would update venting and flaring standards on public lands.

The EPA issued standards for volatile organic compounds (VOC) from the oil and gas industry in 2012 (see Shale Daily, April 19, 2012). At the time, the EPA said it wanted to give the industry more time to meet the new requirements; the agency set a deadline of Jan. 1, 2015 — for wells drilled after Aug. 23, 2011 — to slash VOCs using a two-step process requiring flaring followed by “green completion” equipment to capture and sell the emissions.

The EPA said Wednesday its VOC standards, once fully implemented, would reduce 190,000-290,000 tons of VOC, and methane emissions would decrease by an amount equivalent to 33 million tons of carbon pollution per year.

“Building on [the] five technical white papers issued last spring, the peer review and public input received on these documents, and the actions that a number of states are already taking, EPA will initiate a rulemaking effort to set standards for methane and VOC emissions from new and modified oil and gas production sources, and natural gas processing and transmission sources,” the agency said.

While the announcement was directed at new and modified sources, the administration’s plan mentioned existing oil and gas infrastructure four times:

“EPA will work with DOE, DOT, and leading companies, individually and through broader initiatives such as the One Future [Coalition] and the Downstream Initiative, to develop and verify robust commitments to reduce methane emissions,” the EPA said. “This new effort will encourage innovation, provide accountability and transparency, and track progress toward specific methane emission reduction activities and goals to reduce methane leakage across the natural gas value chain.”

Although the administration did not specify how the new rules would define “existing” oil and gas wells and infrastructure, an executive with Southwestern Energy Co., a founding member of One Future, commended the strategy. Southwestern is one of the top gas producers in the U.S. onshore.

“The decision to defer regulation of existing oil and natural gas infrastructure will allow companies to participate in flexible, performance-based frameworks like One Future and achieve significant emission reductions by employing reduction strategies that are tailored to their own unique operations,” said Mark Boling, president of V+ Development Solutions, a division of Southwestern.

“We are also pleased with the recognition that interagency and private-public partnership efforts are needed as part of the actions announced…, including enhancing the quantification of emissions from the natural gas infrastructure.”

Reaction from within the industry ranged from disappointment to indignation, with industry claiming they were making great emissions-reduction progress on their own without new regulations. The American Petroleum Institute (API) called the new rules unnecessary.

“Emissions will continue to fall as operators innovate and find new ways to capture and deliver more methane to consumers, and existing EPA and state regulations are working. Another layer of burdensome requirements could actually slow down industry progress to reduce methane emissions.”

America’s Natural Gas Alliance CEO Marty Durbin said the group was “disappointed the administration is choosing to take a regulatory approach that will take years to implement, rather than a cooperative approach with the industry that we believe will ultimately result in greater emissions reductions in a shorter timeframe.

“We agree with the White House that voluntary efforts to reduce emissions in a comprehensive and transparent manner hold the potential to realize significant, quick and cost effective emissions reductions, and we question why the administration would single out our sector for regulation, given our demonstrated reductions.”

“EPA’s proposed methane regulation is redundant, costly, and unnecessary,” said Thomas Pyle, president of the industry-backed Institute for Energy Research. “Energy producers are already reducing methane emissions because methane is a valuable commodity. It would be like issuing regulations forcing ice cream makers to spill less ice cream…Like most of the regulations coming out of this ideologically driven EPA, the environmental benefits of this new methane rule are virtually non-existent, but the economic costs for American families are very real.”

U.S. Sen. Jim Inhofe (R-OK), who just last week was confirmed as the chairman of the Environment and Public Works Committee, denounced the plans, noting that EPA data shows that methane emissions have declined 73% from hydraulically fractured gas wells since 2011. “The EPA has once again announced plans to impose a mandate designed to stifle our domestic energy industries despite the successful voluntary steps made by U.S. oil and gas companies to reduce methane emissions,” he said. “This EPA mandate from the Obama administration will not only increase the cost to do business in America, but it will ultimately limit our nation’s ability to become fully energy independent.”

Environmental groups praised the announcement, but took aim at the administration’s decision to hold off on enforcing requirements on existing wells and infrastructure.

“There is no reason to wait 10 years to fix a problem that can be addressed right now at low cost,” said Environmental Defense Fund President Fred Krupp. “Methane pollution is both an environmental threat and a needless waste that the energy industry has failed to take on.

“Oil and gas companies squander enough natural gas each year to heat almost six million homes. The good news is that cost-effective solutions to this problem are readily available, and this new target is absolutely achievable.”

Sierra Club Executive Director Michael Brune said “the unchecked climate pollution caused by the dramatic growth of oil and gas production in the United States” made the new goal necessary.

“We cannot afford to wait,” Brune said. “Regulating methane directly is a critical step, but EPA and BLM must act quickly to reduce methane emissions from all new and existing sources of methane pollution in the oil and gas sector, including the transmission and distribution of natural gas.”

Bob Perciasepe, president of the Center for Climate and Energy Solutions, touched on the industry’s cooperation to date on reducing methane emissions.

“The oil and gas industry is already pursuing voluntary strategies to reduce methane leakage,” Perciasepe said. “EPA’s proposal wisely seeks to build on these efforts by strengthening public-private partnerships. Companies have a real opportunity to continue and grow this leadership to meet this challenge.

“Cooperative initiatives, coupled with sensible regulation of new and modified emission sources, will help ensure that the United States can continue to reap the economic and security benefits of increased energy production while doing its part to address climate change.”