As a natural gas-only utility in a relatively slow-growth area, NW Natural sees some growth opportunities in the shift to more gas-fired electric generation and in the increasing interest in compressed natural gas (CNG) for transportation.

CEO Gregg Kantor on Thursday outlined upcoming filings to the Oregon Public Utility Commission (PUC) to expand storage and have a new utility service offering CNG fueling during a 1Q2013 earnings conference call. The company reported essentially flat profits ($37.6 million, or $1.40/share, compared to $40.3 million, or $1.50/share, for the same period in 2012). Even with earnings down slightly, the utility’s margins were up for the quarter, Kantor said.

The greater Portland, OR, area continues to see modest economic growth, including slightly better utility customer growth for the most recent 12-month period ended March 31 at 1.1% annually. It was under 1% for 2012.

“We are putting the final touches on a proposal we plan to file with the PUC in the next few weeks to provide customers with high-pressure service for CNG vehicle fueling,” said Kantor, who said his region is seeing increased interest in CNG vehicles from local fleet operators, but Oregon has very little fueling infrastructure to support it.

While natural gas costs about half the price of a gasoline equivalent gallon and is 30% cleaner, Kantor said that “like most states, Oregon has little in the way of CNG fueling infrastructure, and we hope [our] proposal will be the first step in addressing that challenge and allowing local companies to take advantage of gas for transportation.”

In the underground storage area, NW Natural is responding to the increased gas-fired generation that its neighboring electric utility, Portland General Electric, is developing at its Port Westward facility. In the first quarter, the gas-only utility has begun work on several components of an expansion at its Mist Storage facility northwest of Portland.

He said the utility is working on requests for PUC and Oregon’s Energy Facility Siting Council approvals of the expansion, and at the same time doing preliminary site work, such as environmental field studies and engineering designs.

“This project will require development of new storage wells, a compression station and pipelines, and at this point we are targeting to have it in service in 2016,” Kantor said. 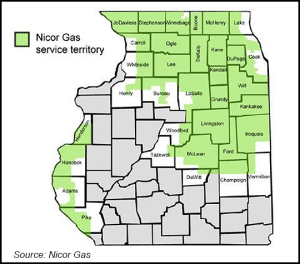 Southern Company’s Nicor Gas has gained approval from the Illinois Commerce Commission (ICC) to move forward with a pilot project to test delivering renewable natural gas (RNG) through its distribution system.  Through the Renewable Gas Interconnection (RGI) Pilot, RNG producers within Nicor’s service area may use the service agreement to supply gas through the utility’s…