NW Natural CEO David Anderson used a quarterly earnings conference call on Friday to discuss the importance of the natural gas industry’s move to decarbonize as a way to mitigate climate change. 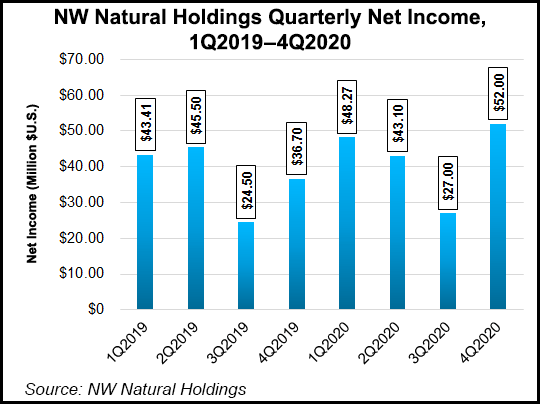 The Portland, OR-based operator plans to be carbon neutral by 2050 in keeping with state mandates, said Anderson, who chairs the American Gas Association (AGA). He said NW Natural executives are learning a lot about how to utilize hydrogen in the decarbonization efforts by looking at what’s been done in Europe.

Anderson said the United States also should learn more from the recent severe winter weather. In Oregon, many customers were without power during a major wind and ice storm in February, but unlike Texas, in most cases customers still had gas for cooking and heating.

“The only reason that U.S. renewables have advanced as far as they have is because of policy support” at the national and state level, Anderson said. “And that is what we need here on hydrogen in this country, and I think Europe is ahead of us in that regard. They’ve figured out that going down the path of electrification is not a good move.”

Executives have promoted the use of renewable natural gas (RNG), but they also are looking at hydrogen as a longer term option. NW Natural is testing blended amounts from 5-30% hydrogen mixed with natural gas.

Anderson said needed policy changes could come at the national and state level, and he cited Oregon’s recent RNG legislation, which could be replicated. He said that one of the reasons he accepted the AGA chair this year was to promote industry decarbonization.

“The option we’re really interested in involves methanization, because you can take waste carbon dioxide from an industrial or power generation facility and apply that to your power gas process and methanate the hydrogen and at that point it is interchangeable with natural gas molecules,” said Senior Vice President Kim Heiting. She noted that an electrolyzer also could be paired with RNG to create hydrogen.

“We believe longer term all of these applications will be in play, and there are advantages to each one of them.”