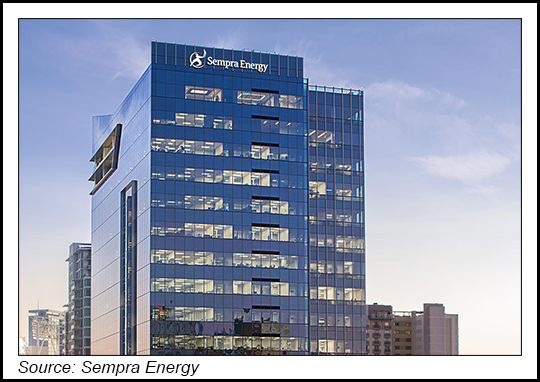 California, where two of Sempra’s three major U.S. utilities operate, has a regulatory proceeding to develop a strategy for a phased approach to developing a multi-decade strategy for gas. Martin also offered a national perspective on what is driving the California Public Utilities Commission (CPUC).

IEA’s study forecast declining emissions in the industrialized parts of the world, and increases in energy emissions in the developing parts. “Since 2000, the United States has led the world in absolute declines in emissions,” he said, and a lot of it is due to replacing coal use with natural gas.

“Globally, the massive build-out of renewables combined with natural gas, and switching from coal, is a case study for getting liquified natural gas (LNG) into all the developing markets,” Martin said. “And whether it is China or India or Vietnam or Thailand, they have the opportunity to get a lot of renewables backed up by natural gas.”

Martin said this scenario is causing a reassessment of local distribution companies (LDC) and the role they can play, particularly currently in Europe. “Today European LDCs are outperforming U.S. LDCs by about 30%,” he said. “And the narrative in Europe is that LDCs are a big part of the carbon solutions by taking biomethane as renewable natural gas (RNG) and putting it into the distribution systems.”

The goal is to have 5% RNG in the SoCalGas system by 2022 and 20% by 2030. “We will have reduced our fugitive methane emissions 20%, and we’re five years early in meeting the state’s mandate for 2025,” said Sagara, adding that the gas-only utility is playing a role in adopting hydrogen and various carbon capture approaches.

Sagara said the state ultimately needs greater penetration of renewable energy and electrification, but he stressed that natural gas is a function of getting higher renewable penetrations. In addition, “battery storage cannot supply the long-term storage that we need at times. Gas infrastructure enables more renewables on the grid.”

Martin and Sagara said that California is unique in having penetration rates of more than 90% for gas space and water heating.

“I think there is a growing recognition that we are in a transition, and natural gas is part of the answer to help get higher renewable penetration rates,” Martin said.

As a result of this past summer’s rolling blackouts, Martin said the state needs to build more in-state generation capacity, including gas peaking plants, and expand utility reserve margins from the current 15-17% range.

“That will be a future process that is carried out by the state’s three energy agencies — the CPUC, California Energy Commission and the California Independent System Operator,” Martin said.

Evans said the utilities’ “goals are ambitious, yet achievable.” They depend on a combination of existing and new technologies.

“Investing in infrastructure safety and the environment are a priority, with programmatic upgrades continuing systemwide,” he said. “Black Hills Energy is committed to completing replacement of all remaining unprotected pipe before 2035.”