Princeton, NJ-based NRG Energy Inc. said it has sold 4,850 MW of natural gas and oil power plant generation in the Northeast and California for $760 million. 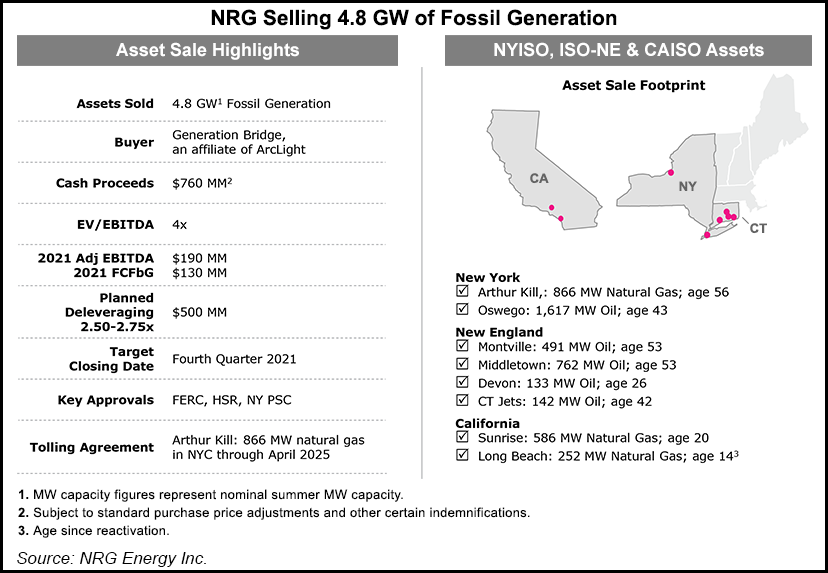 The sale was revealed during a 4Q2020 earnings conference call in which CEO Mauricio Gutierrez also called for a systemwide root cause analysis of the electric and natural gas response to the February freeze in Texas.

“Many of these assets are at the end of their useful lives and are economically dependent on capacity markets,” Gutierrez said. “This is a good transaction for us, further streamlining our business, and addresses their internal values and earnings concerns. Our portfolio repositioning and optimization is a continuous process.”

The transaction is expected to close by the end of the year.

Gutierrez called the Texas energy delivery breakdown in mid-February “unacceptable,” and committed to work with all stakeholders to prevent the same thing from happening again. The root cause analysis ordered by the Texas legislature should examine both the natural gas and electric systems, he said. “Everyone appreciates the interdependence between gas and power.” He thinks the process will take some time, however.

Gutierrez said three items should be involved in the postmortem: how to harden the energy system; overall market design and reserve margins needed; and communications between the power and gas systems.

“The natural gas system is critical, and it needs to be hardened just like on the power side,” Gutierrez said. “We also have to understand the magnitude of this past storm as we modify our systems; this was a hundred-year event.”

There are already “lessons learned” from the system breakdown in February and how to think about counterparty performance and risk, Gutierrez said. In Texas, where 45% of all the generation is gas-fired, the power and gas systems are highly interdependent. Whether the issue is hardening of the infrastructure or communications, there has to be closer coordination between gas and power operators, Gutierrez said.

This year’s three-day freeze ranks as the coldest in Texas in the last 130 years, while the 2011 freeze was the 60th worst over that same period. “That gives us a pretty good context in re-baselining some of the winterization of both systems,” Gutierrez said.