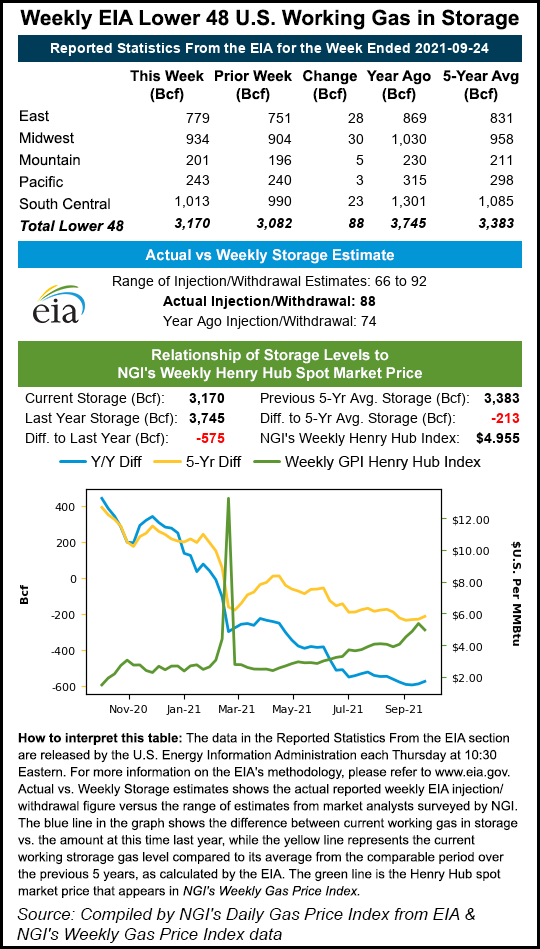 A tight global market — the result of extreme weather in 2021 as well as both modest production and maintenance catch-up work in the pandemic’s wake — has fueled multiple futures rallies this month alone. The prompt month soared above $6.00 in intraday trading earlier this week, reaching highs last seen more than a decade ago, while prices in Europe and Asia set records.

Outlooks point to the potential for a cold winter in Europe, where gas stockpiles are already precariously light, and power demand is ramping up in China and elsewhere in Asia. These factors are driving the surges in global prices as well as demand for U.S. exports of liquefied natural gas (LNG), fueling gains for Henry Hub futures.

“Asian and European markets are freaked out,” one participant on The Desk’s online energy platform Enelyst said Thursday. “Everybody is worried about low natty stocks in advance of winter.”

Commodity Weather Group, in an updated forecast this week, said Europe could experience “the coldest winter since 2012-13” and among the top 10 coldest in more than 40 years.

Compounding matters: As countries across Europe push for increased use of renewable fuels, common alternatives to gas in past years — coal chief among them — are also in short supply.

“Heads have been spinning like a Syfy remake of ‘The Exorcist’ lately,” another analyst said on Enelyst.

Concerns about weak U.S. natural gas supplies that took root over the summer months have begun to ease, however, as shoulder season weather conditions settle in and injections of gas into storage mount.

“The pattern continues to favor very warm weather in the northern half of the nation” through October, keeping early-season heating degree days “well below normal,” while conditions in the southern U.S. are likely to prove comfortable as well, dampening cooling demand, Bespoke Weather Services said Thursday. If forecasts prove accurate, the firm said, October 2021 would be the second-weakest in terms of gas-weighted degree days since 1980.

Amid the mild weather and modest domestic demand, inventories are rising. The U.S. Energy Information Administration (EIA) on Thursday reported an injection of 88 Bcf natural gas into storage for the week ended Sept. 24. The result, which topped the midpoint of analysts’ estimates, easily exceeded the 74 Bcf print for the same week in 2020 and the five-year average of 72 Bcf.

Storage levels in the United States over the past four weeks have steadily climbed, and analysts expect continued strong injections well into October.

“We now project the next two numbers to be at or above the 100 mark, in terms of weekly injections,” Bespoke said.

Prior to Thursday’s EIA report, the median analyst estimate from a Bloomberg survey came in at 86 Bcf, while a Reuters poll landed on a build of 87 Bcf.

The latest injection lifted inventories to 3,170 Bcf, though stocks held below the year-earlier level of 3,745 Bcf and the five-year average of 3,383 Bcf. The Midwest and East regions led with builds of 30 Bcf and 28 Bcf, respectively, according to EIA.

Looking ahead, analysts anticipate an even larger injection.

“Next week’s EIA report is likely to easily print over 100 Bcf, and potentially closer to 110 Bcf, thereby improving deficits” to the five-year average, NatGasWeather said. “The following one is also likely to be over 100 Bcf and a bit larger than normal to further improve deficits.”

Spot gas prices varied across the Lower 48, with a mix of mostly modest gains and losses.

NatGasWeather said through this week and into next week demand would be modest. It noted a rainy weather system over the Northwest this week, along with “two different ones over the Plains, and a fourth over New England. Temperatures with these systems are in the 50s to 70s besides a warmer one over Texas and the Southern Plains with highs of 80s.”

Looking to the second week of October, the forecaster added, “high pressure will rule most of the U.S. with above-normal temperatures, which for early fall means perfect highs of 60s to 80s.” The firm added that “it won’t be until the last 10 days of October before more impressive cold shots arrive” in the Lower 48.

All of that noted, there will be demand exceptions. Swaths of the Southwest are still expected to see highs in the 90s this week and potentially next, and Southern California could see similar conditions this weekend. Temperatures in Los Angeles, for example, had cooled into the 70s this week, but National Weather Service forecasts now show highs in the 90s beginning Friday. Temperatures across Southern California are expected to be 10 degrees or more above normal this weekend. With temperatures relatively cool on Thursday, however, hubs in California posted losses. SoCal Citygate led the way, dropping 82.0 cents to $6.265.