“The times they are a changin’.” NGI’s National Spot Gas Average for November Bidweek prices showed a tempered gain of 9 cents to $3.53, but regional changes were moving around with the randomness of bumper cars at an amusement park. 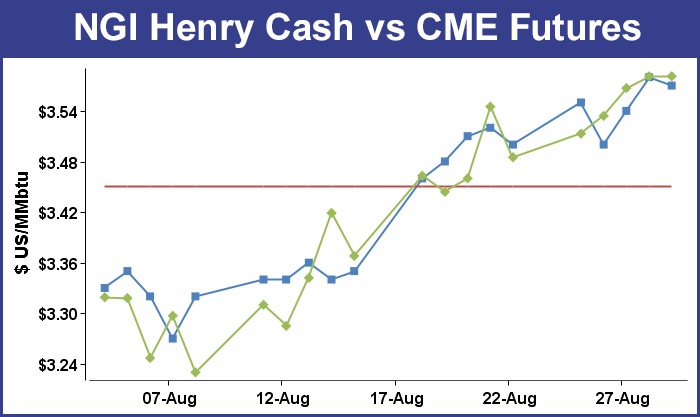 No longer the stepchild of producing regions, the Rocky Mountains posted the greatest gains, adding 30 cents to average $3.59 and outdistancing the historically premium Northeast market at $3.45, up 25 cents. In terms of overall price levels, the Rockies were just behind the Midwest, which came in at $3.72, higher by 4 cents, and California at $3.76, up 16 cents.

Shortfalls in Pacific Northwest Hydro have helped boost Rocky Mountain and California prices as power producers rely on increased gas to fuel power generators. Malin bidweek at $3.69 enjoys a comfortable 10 cent premium to Opal. The Northwest River Forecast Center reported that October’s outflow at the Dalles Dam along the Columbia River was running 6,482 thousand acre-feet or just 92% of normal.

Much attention will be paid to northeastern price points in the coming months as winter cold sets in and projects ramp up to increase gas takeaway from the constrained Marcellus Shale region. As expected, Spectra Energy Corp., Tennessee Gas Pipeline Co. and Williams’ Transcontinental Gas Pipe Line separately opened the taps Friday on four projects to move 1.8 Bcf/d of Marcellus gas to markets in the Northeast.

Some Halloween tricks were in play in the natural gas futures arena, when November futures expired Tuesday at $3.496, only to be revised by the CME Group on Friday without explanation to $3.497. “CME Clearing has contacted all affected firms and made the necessary adjustments,” the exchange said in a notice.

Tom Saal of INTL FC Stone in Miami was surprised by the news. “I think this is a pretty big deal. There are an awful lot of contracts tied to that price. What is remarkable is that it even happened, based off of how we know the settlement is calculated. I think an explanation is warranted.”

A Michigan marketer said his company was “going a little heavy on baseload” for November but expressed reservations if the weather should moderate as is presently forecast. The National Weather Service (NWS) in its six- to 10-day outlook shows the entire United States east of the Mississippi River to be above normal with the western half of the country below normal. Longer term in November, NWS shows above-normal temperatures confined to south and east of a broad arc extending from southeast New Mexico to South Carolina and below-normal temperatures relegated to a portion of the Pacific Northwest and Northern Plains.

The marketer said his company was pleased with the Nymex November settlement of $3.497 and would be paying a basis of 17.5 cents for baseload volumes on Consumers.

Others saw no unusual bidweek activity, with buyers taking their “normal” volumes. “I haven’t seen anyone do anything unusual fixed-price wise for bidweek,” said a Houston-based marketer working the Chicago Citygate market. In his view, no one was making a November market assessment by their bidweek activity.

“People are making their bidweek purchases as close to normal volumes as they can,” he said.

Prior to the end of bidweek trading Thursday, futures seemed reluctant to probe below $3.60, but observers ultimately expected fundamental factors to weigh on prices. “Near-term forecasts for above-average temperatures and limited heating demands, the ramping-up of nuclear power plants as maintenance and refueling season ends, and the near-record production levels of gas are likely to exert downward pressure on the markets in the coming weeks. Weather forecasts are little-changed, with above-normal temperatures expected across the East in the coming weeks,” said Addison Armstrong of Tradition Energy.

In Thursday’s trading, physical gas prices for Friday delivery tumbled an average 9 cents as traders were eager to get deals done ahead of weekly government inventory statistics. December futures fell 3.9 cents to $3.581, and the January contract was off 4.8 cents to $3.663. East and Northeast locations were down by solid double digits. Gains at some Marcellus points along with firm quotes at SoCal Border and Gulf locations were unable to offset the broader selling. The Energy Information Administration (EIA) reported a build of 38 Bcf for the week ended Oct. 25, about 2 to 3 Bcf greater than market expectations, and that was enough to prompt the futures decline.

The 10:30 a.m. EDT storage report was somewhat above market expectations. Traders were expecting a build in the 34-36 Bcf range, and the actual figure of 38 Bcf sent prices scooting to the low of the day. “$3.60 was initial [technical] support and now I’m thinking $3.56 is the new support zone. If the number would have come in a lot higher, we would have seen more action,” said a New York floor trader.

Tradition Energy calculated a 33 Bcf build, and most estimates were well outside last year and the five-year average. Last year, 66 Bcf was injected, and the five-year pace is 57 Bcf. United ICAP was looking for a 35 Bcf increase, and a Reuters poll of 24 market pundits revealed an average 32 Bcf with a range of 28-43 Bcf. Bentek Energy’s flow model was anticipating a relatively thin 32 Bcf gain.

Bentek said cold weather prompted a significant decline from last week’s 87 Bcf build. “Significant increases in residential/commercial demand slashed storage injections from the previous week as heating load increased 6.2 Bcf/d, with 4.8 Bcf/d accounted for in the East Region,” Bentek said. “The increased demand was driven by below-normal weather in the East Region as population-weighted average temperatures in the Midwest reached sub-40 degrees for three of the seven days during the storage week ended Oct. 25. This cut total sample injections within the region by 20 Bcf from the previous week and increased sample deliveries to LDCs by 3.9 Bcf/d week-over-week.”

Analysts at Energy Metro Desk hinted that there is still room in the weeks to come for a record ending storage inventory. “We see an outside chance for a low-baller surprise this week out of EIA, which would be right in the 30-32 Bcf neighborhood,” said John Sodergreen, editor. “Still, S/D [supply-demand] models seem to be tracking higher, pointing directly to our consensus [36 Bcf]. Bottom line, it will be a build, as will the next two reports, at least; likely the next three reports. And if one more can be squeezed out, we’ll have a new record, for sure.”

A Midwest marketer Thursday said, “people were getting set up for winter and then discovered they had no load for [Friday]. They were selling like crazy before the storage number came out. They were set up to cover the end of the month, and weather is not here to start the month so they were putting more pressure on the sales side. People were hitting bids early to get rid of their gas. No one wants to be long or short when that [EIA] number comes out.”