No place in the entire world has better dry or wet gas potential than the Marcellus Shale, now “four years into a 50-year play,” but ensuring that there’s enough infrastructure for adequate takeaway will take some time, a top Williams executive said Tuesday. 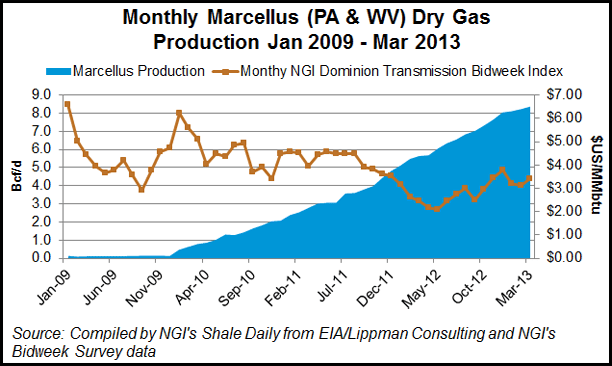 In January, Senior Vice President Frank Billings took the helm for Williams’ gathering and processing operations in Pennsylvania, West Virginia, Ohio and New York. During the annual analyst day this week, he explained why the Northeast holds the most promise for the energy infrastructure giant, which at this point can pick and choose where it might want to develop.

“Clearly, the Marcellus is the basin of wet and dry gas development in the United States,” Billings said. “A lot of people are coming in from a production perspective, and for infrastructure opportunities available as well.”

The Marcellus has its own pedigree, but developing it is no different than most other basins, he said. Billings remembers from his days in the late 1980s and ’90s when he managed natural gas liquids (NGL) and trading activity for western U.S.-focused Mapco, before the company merged with Williams in 1998 (see Daily GPI, March 31, 1998).

“We were working on western basins, the same teams here today that are doing the same thing in the Northeast. Twenty years later, it’s not that different. We are overcoming challenges in the Northeast as well. At the end of the day, Mapco and the Northeast have created great franchise positions that have been generational for Williams over the last 20 years and now the next 20.

“The main difference between what was in the ’90s and 2013 is scale, and the opportunity set is much, much larger than what we had out West.” Important to any long-term success for a company is to “develop a geological diversity, a geographic diversity and a producer diversity.” With the Gulf of Mexico, the western assets, the Marcellus and the Utica, all with “different productive capability, it’s a nice footprint.”

Now the challenge is to retain and expand relationships with producer customers, particularly in the still-expanding Marcellus and still-emerging Utica. Williams has secured big-name partners for many of its Northeast midstream operations, but there’s still more to do.

The Bluegrass Pipeline, a joint venture with Boardwalk Pipeline Partners LP, is high on the agenda. It would carry mixed NGLs to Gulf Coast and Northeast markets (see Shale Daily, March 7). CEO Alan Armstrong said one of the attractions is its ability to provide differentiated market access for unfractionated NGL volumes, which now are being railed to the Gulf Coast and Canada for 26-44 cents/gallon.

Williams Partners LP and a unit of Royal Dutch Shell plc also are working on Three Rivers Midstream, an NGL and dry gas venture to serve operators in northwestern Pennsylvania and northeastern Ohio (see Shale Daily, April 15). It initially would be anchored by a long-term fee-based agreement for close to 275,000 dedicated Shell acres; other agreements are being pursued.

Chevron Corp. partners in Laurel Mountain Midstream LLC, which owns close to 2,000 miles of gas gathering lines that serve about 7,000 wells (see Shale Daily, Oct. 14, 2010). “We have seen production level off, not so much because they didn’t like the acreage, but they now are focused on wetter positions that they have,” Billings said of Chevron. “And we’re in a good position to be a service provider for them in northwestern Pennsylvania,” where the producer is developing NGLs.

Being able to serve Chevron’s changing production profile is key, he said. Laurel has had “different volume curves over the last three years, most really just a reaction to Chevron’s changing perspective…When the gas price softens a little bit, they back off dry gas…What we’ve done in reaction is stripped out the capital that wasn’t generating revenue for us…We have capacity to move 620 MMcf/d of Chevron gas from Laurel today and have the ability to ramp up quickly when Chevron moves into those areas…”

Susquehanna County, PA, meanwhile, “is the gift that keeps on giving,” said Billings. “You’d be hard pressed to find a better area in the world.” Williams frequently works with Cabot Oil & Gas Corp., which has about 25,000 drilling locations identified in the county, and therefore, “this is going to be an area where we’re going to be putting a lot of capital in and expanding capacity significantly, adding 2.3 Bcf/d of dehydration capacity in 2013 and 2015 in response to what Cabot is doing up there and WPX Energy Inc. and Carrizo Oil & Gas Inc…”

Cabot is transitioning from “acreage-capture mode to pad development” in 2014,” said Billings. “A lot less capital will be going into the area, but we’ll see significant volume growth.”

Susquehanna County “is significant for us,” Billings explained. Susquehanna delivers about 3 Bcf/d, and adjacent Bradford County, served by Access Midstream Partners LP, of which Williams owns half, has about 2 Bcf/d (see Shale Daily, Dec. 13, 2012). “Between those two counties, our two companies probably are moving about 5 Bcf/d between us…We can flow gas before compression comes on and get an uplift. It’s a great opportunity for us.”

The Ohio Valley “is a different story,” Billings said. “We are engaged with the producers up there, and they are really working to understand the drilling locations they have. We are working with them to have the right mix of assets in place to support drilling and the production profiles they want to execute over the next two, three, four years. We need to understand this 24 months out to get the infrastructure, the permits in place. It’s a lot of high liquids handling, and the logistics-to-market is what we’re focused on…”

There a several big producers, including Chevron and Statoil ASA, that are “planning to spin the bit” in the Utica. “The current group has delayed some plans on difficulties from moving gas from the area, but they are not backing away longterm” he said, referring to a recent report that initial production was not as strong as anticipated (see Shale Daily, May 20). “They are engaging us now, and we are working with them to understand what they are doing and see what we can put in place for projects to have the capability to move volumes…”

“We will see some better volumes in warmer weather,” Billings said of the Ohio play. “It’s our friend up there. We see a window of time when Mother Nature helps us out, and we can get liquids handling facilities in place before we get to the fall and winter months next year. It’s setting up for a nice volume ramp up, but 2013 still has some challenges to get assets in place. By the end of 2013, our goal is to be well positioned. We know we can do it, and it is incumbent on us to show the producers that we can get the netbacks they want and that the producers are not waiting on us.”