Since the beginning of July, August forward basis curves around the U.S. Northeast have been accentuating their end of summer contango as markets continue to price in cooler expectations of August weather and a warmer-than-average autumn. According a report published Monday by forecasters at Weather Services International (WSI), average temperatures in the Northeast will be cooler than normal in August, likely dampening air conditioning load across the region (see Daily GPI, July 21). 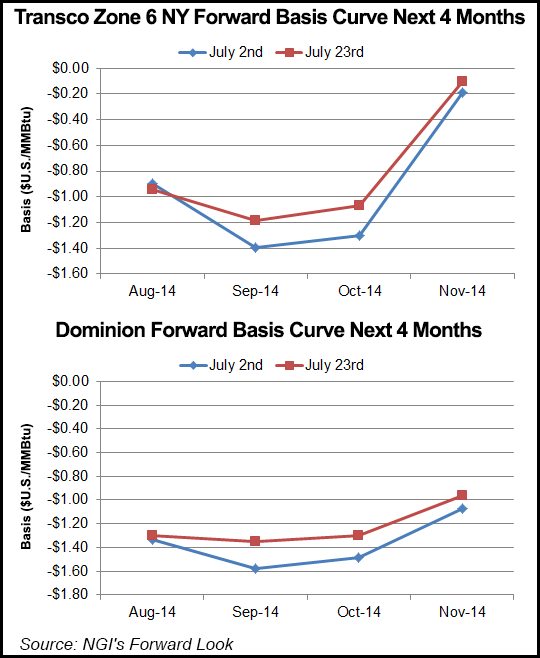 August basis at Transco Zone 6 NY has dipped 4.4 cents over the course of July trading, falling from negative 90 cents on its first day prompt to negative 94.4 cents as of July 23. The change in price at Algonquin Citygates was even stronger, with August basis plunging 21.2 cents from negative 43.8 cents to minus 65 cents over the same period. Tetco M3 also dipped 5.6 cents from -$1.026 to -$1.082. “Northeast natural gas prices (i.e., Marcellus Shale gas region) should continue to run very soft compared to Henry Hub due to below normal regional temperatures and increased production,” said Energy Securities Analysis Inc. Senior Analyst Chris Kostas.

Regarding the rest of the country, the WSI reported that warmer-than-normal temperatures can be expected. Accordingly, price gains have been seen across many western points, especially in California. Since the July 2 issue of NGI’s Forward Look, August prices at PG&E Citygate have risen just 9.5 cents from a basis of plus 60 to 69.5 cents as of July 23. Likewise, SoCal Border has seen a similar gain of 6.8 cents to plus 36.5 cents over the same period.

Along with forecasts of a cooler August, the WSI analysts expect warmer-than-normal temperatures to dominate in the Northeast and across all the country as autumn approaches. “Although this could mean a reduction in early heating demand, traders seem to be expecting more in the way of increased cooling demand this fall,” said NGI markets analyst Nathan Harrison.

“At most of our northeastern Forward Look locations, balance of summer basis has actually risen pretty strongly over the course of July trading. This could indicate the market is expecting a later onset of winter with the price impacts of weather forecasts playing into the fall cooling demand paradigm,” Harrison added.

Balance of summer prices at Transco Zone 6 NY have risen 13.3 cents since August became the prompt month, coming in at minus $1.064 as of July 23. Dominion and Tetco M3 followed suit, rising 14.9 and 12.5 cents respectively. Columbia Gas TCO also added about 2 cents, coming in at minus 9.4 cents.

Delayed winter heating demand would certainly help the underground storage scenario. Producers have been working to fill storage caverns this summer after last winter drained them below the 1 Bcf level. Last week, the Energy Information Administration reported natural gas inventories at 2,129 Bcf, 608 Bcf less than last year and 727 Bcf below the five-year average (see Daily GPI, July 17). The agency has estimated that working stocks at the end of October will reach only 3.43 Tcf, 380 Bcf lower than at the same time last year (see Daily GPI, July 9).

“Perhaps lost in the shuffle is the fact that storage levels in the East are filling up a bit faster than those of the overall U.S.,” said Patrick Rau, NGI‘s Director of Strategy & Research. “Exiting this past winter, East working gas was roughly 53% below where it was the previous year, versus 51% for the entire Lower 48. Today, East gas is down 18.5% year-over-year, while the Lower 48. is down 22.4%.

“Throw in the fact that Appalachia natgas production has increased each month since February, and perhaps the rest of year outlook in the Mid-Atlantic and Northeast isn’t looking as bad, at least from a supply standpoint,” Rau noted.

Tim Evans of Citi Futures Perspective thinks natural gas in storage at the end of the injection season will be closer to 3.50 Tcf, but warns against placing too much emphasis on any storage level estimate.

“The great unknown here is what kind of a winter we’re going to have,” Evans told NGI. “There’s always the question about what the peak end of season storage level is going to be, but the real question mark here is how cold the winter’s going to be.

“Last year we got above 3,800 Bcf, and we still had price spikes because we had something like the third coldest winter since 1980, and that drove not just the futures price but also the physical price. We had individual days where demand may have been above 130 Bcf/d, which is a really big number. Even on a monthly average basis, we had some very strong demand numbers.

“The price outlook here is really a two-part question in my mind. Part one is where do we get to on storage, and the little bit further forward question is how much heating demand do we see? It’s not even enough to know what that end of season number is. We could be at 3,400 Bcf, and be oversupplied if we get a warmer than normal winter; we could be at 3,800 Bcf, as we were last year, and not have enough gas if we have a very cold winter…

“We’re also going to have a little bit higher production level to help carry us through the winter, so we’re not necessarily going to be 100% as reliant on storage gas as we’ve been in the past,” Evans said. “If you look at the June dry gas production numbers, they’re about 4.5% higher than a year ago, so that’s a little bit of additional cushion as we head into the next winter.

“The geographic distribution of that supply is also evolving, and that’s where you do see some extraordinary valuations on gas in the northeast relative to past years. That’s also been a substantial shift in the marketplace. More gas out of the Marcellus, more pipeline capacity out of the Marcellus. That should reduce the average price.”

Evans said more capacity “may not fully cut off the extreme spikes, because we may still get into a situation where for a period of days the natural gas consumption goes well above the pipeline capacity and we’re back in that situation where we’re pipeline constrained.”