North Dakota has two special rigs drilling in the Bakken Shale not included in the 10 reported in the July count that are exploring the potential for carbon capture and storage (CCS), as well as slurry fracture injections. 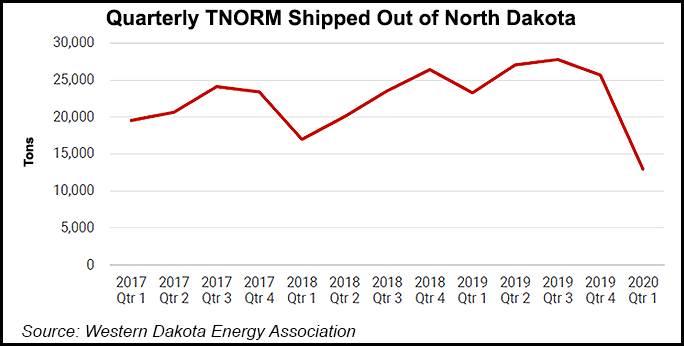 A rig in Center is drilling a well to explore CCS prospects. Another rig in Johnsons Corner is said to be the first in the Bakken specifically drilled for slurry fracture injections.

“There has been slurry fracture injection in Texas and Alaska but never in the Williston Basin,” said Department of Mineral Resources director Lynn Helms.

Disposing of oilfield waste can be expensive, particularly for technically enhanced radioactive material, aka TNORM.

The pump slurry well underway has about 20% solid waste, which would be injected into the Broom Creek formation about 7,000 feet underground. The end result if it proves successful could lead to fewer landfills and avoid trucking oilfield waste out of state.

Drilling on the slurry well is scheduled to be completed Monday (Sept. 21), with waste removal operations set to begin by the end of the year.

Earlier this year, the Internal Revenue Service finalized regulations to implement a CCS (45Q) tax credit that could help more than two dozen proposed projects nationally beyond the initial engineering and design stages.

Backers of the CCS project in Center said the tax credit stimulus could create more interest in carbon sequestration. Grand Forks-based Minnkota Power Cooperative plans to capture 90% of carbon emissions from its 455 MW unit at Milton R. Young Station to potentially extend the life of the plant another 25 years.

Minnkota Power seeks to pump carbon into an underground geologic storage area on land underneath the lignite mine that supplies coal to the plant. Although the system would bury carbon from one of the two units, the size makes it a potential case study and a road map for other coal-base facilities. It is said to be nearly twice the size of the largest carbon capture project completed, the 240 MW Petra Nova plant southwest of Houston.

In August a study by the Brattle Group concluded that CCS was an increasingly attractive option for utilities seeking to decarbonize operations.