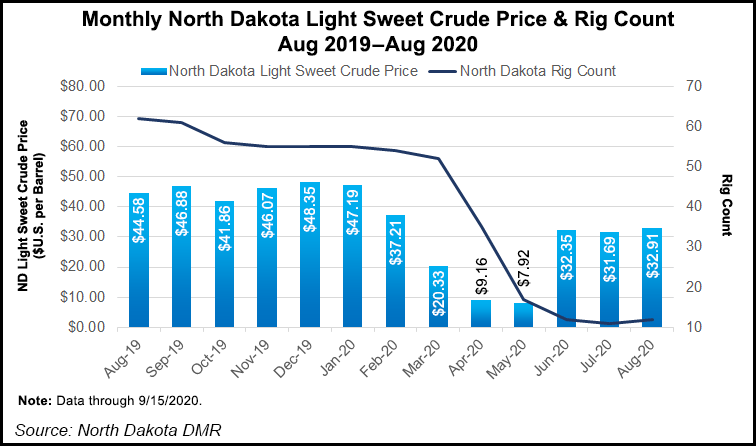 Gas capture hit an all-time high of 91%, a 19% increase. The rate meets a statewide mandated percentage that takes effect in November.

More than 1,000 unconventional wells also were brought back online between June and July, along with 200 vertical wells, Helms said.

Helms, director of the Department of Mineral Resources, said “crude prices are very soft and there is a tremendous amount of oil in storage, raising concerns about how long the production rebound will last.”

“Prices continue to be soft, and they are going to be soft this winter unless something extraordinary happens,” Helms said. “We’re approaching the winter season with only 10 rigs, a modern day low for us when we need 35-40 rigs if we want to sustain 1.25 million b/d.”

The state expects production to decline before winter given the decline in drilling and hydraulic fracturing (fracking).

“Without 16-35 drilling rigs and 20 frack crews operating, we will not sustain those sorts of production numbers in the winter,” he said. “We’re not even close to the kind of completion numbers we need to sustain 1.2-1.3 million b/d.”

There is a complex set of external factors that have put Bakken crude under a cloud of uncertainty, including a storage overhang nationally and the potential impacts from hurricane season in the Gulf of Mexico. There also is uncertainty about the Dakota Access Pipeline, which moves Bakken crude to markets.