News that Continental Resources Inc. may be taken private should come as no surprise, according to North Dakota’s top oil and gas regulator. 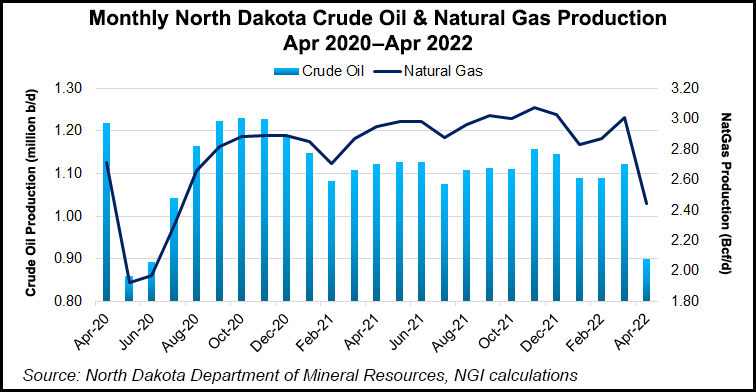 Continental is the largest producer in the oily Bakken Shale, which accounts for 96% of the state’s production. Executive Chairman Harold Hamm announced he is seeking to purchase all outstanding shares in the firm not already owned by the family.

“Going private appears to have opened the door to better leveraging your cash flow, to private venture capital, to less scrutiny from the administration,” Helms said. “If we see more of that, I think we could see more rapid production growth.”

Public E&Ps have faced pressure from investors to keep production in check, and to deliver on environmental, social and governance metrics. Helms also referenced enhanced climate disclosure requirements that the Securities and Exchange Commission (SEC) has proposed for public E&Ps.

The new SEC rules if adopted would require public E&Ps to disclose risks climate change poses to their business, and to disclose their own greenhouse gas emissions.

In a letter to Continental employees explaining the rationale to take the company private, Hamm said, “We have consistently said that as long as we were appreciated in the market, we would remain a public company, but if our opportunities were limited by being public, we should look at alternatives. We have determined that the opportunity today is with private companies who have the freedom to operate and aren’t limited by public markets, similar to the way that we operated approximately 15 years ago, prior to becoming a public entity.”

Helms, meanwhile, said North Dakota’s public E&Ps are planning to increase production in the state by 1-2% in 2022, while private producers are “much more optimistic than that.” He added, “I think it’s been borne out by what we’ve seen in the rig count.”

The trend is playing out elsewhere in the Lower 48 as well. In the Permian Basin, private companies more than doubled their collective rig count between January 2021 and April 2022. The Permian privates are expected to raise their collective capital spending to nearly $9 billion in 2022 from $5.8 billion in 2021, according to recent analysis by Rystad Energy.

North Dakota’s oil and natural gas production fell by 20% and 19%, respectively, in April versus March, due mainly to consecutive winter storms that knocked out large chunks of the state’s production and processing capacity. Oil production averaged 900,597 b/d, while natural gas output was 2.44 Bcf/d.

Operators reported production losses of 45-100% from the storms, while the state’s two largest natural gas processing plants were knocked completely offline, according to Helms.

Only twice in history has North Dakota seen comparable month/month production declines, Helms said. Those plunges were caused by the Iranian Revolution in 1979 and the onset of the Covid-19 pandemic in early 2020.

After the April blizzards this year, output didn’t fully recover until the start of June, said Helms, noting that oil production has since returned to over 1 million b/d.

North Dakota’s drilling rig count stood at 37 as of last Tuesday, versus 40 at the end of May, according to DMR.

While the rig count has been inching upward over the last few months, there is little chance it will break 50 even at $120/bbl oil, Helms said. He cited the shortage of qualified drilling and fracturing crews.