North Dakota’s tally of active oil and natural gas drilling rigs and hydraulic fracturing (frack) crews has risen to levels not seen since the start of the pandemic, the state’s top oil and gas regulator said Friday. 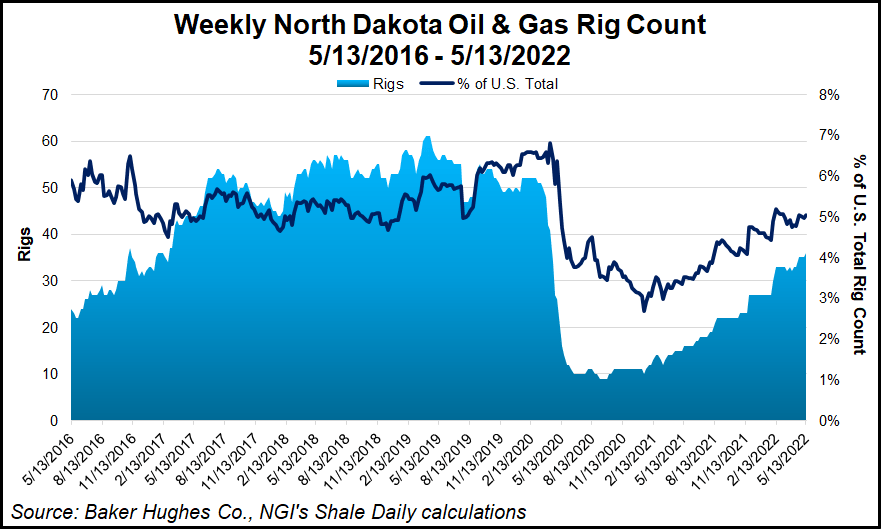 The number of active frack crews, meanwhile, had reached 15, a number not seen since April 2020.

Oil and natural gas production in the state rose by 3% and 4.5%, respectively, in March versus February. Oil output grew to 1.12 million b/d while natural gas output swelled to 3.0 Bcf/d, DMR data show.

NGI’s Northern Border Ventura price, located on the same system but to the southeast in Ventura, IA, averaged $7.895/MMBtu on Tuesday (May 17), up from $2.815/MMBtu a year ago.

Helms highlighted that natural gas and oil storage inventories, both domestic and global, are well below historical averages, heralding continued high prices of each commodity.

Although natural gas production growth is outpacing that of oil, producers in the state appear to still be keeping flaring in check.

The Bakken Shale and statewide natural gas capture rates both averaged 95% in March, with only a handful of non-Bakken areas showing substantially lower rates.

Drilling permits totaled 55 in April, down from 65 in March, while well completions fell to 33 from 53. The drop in completions was no surprise, Helms said, given two back-to-back blizzards that occurred last month. The blizzards are expected to substantially impact April production figures, he said.

The state’s drilled but uncompleted (DUC) well count continued to creep downward to 451 in March from 463 in February, part of a larger nationwide trend.

Workforce issues, meanwhile, remain “the number one barrier” to adding drilling and frack crews in the North Dakota oil patch, Helms said. “It’s taking around two months to train and deploy a drilling rig and crew, and pretty similar timeframes for frack crews,” he explained.

Helms said that one oilfield services provider has about 12 rigs available in the state, but workforce constraints are limiting their deployment.

Helms also cited a lack of newbuild frack fleets since before the pandemic, saying, “the iron that’s out there is starting to show some wear and tear, some age. And at some point, we’re going to have to see capital deployed to bring that iron back on.”

The Bakken’s leading producer, Continental Resources Inc., produced 171,401 boe/d in the shale play during the first quarter, up from 160,577 boe/d in the same period a year ago. In a presentation this month, Continental said it had six active rigs in the Bakken.

Fellow producer Ovintiv Inc. said it had two rigs running in the Bakken, with plans to turn 25-30 wells to sales there in 2022.