Halliburton Co.’s job board is sold out for equipment in North America as demand continues to increase for the amount of proppant and the amount of stages producers are using to drill and complete their onshore wells, CEO Dave Lesar said Monday. 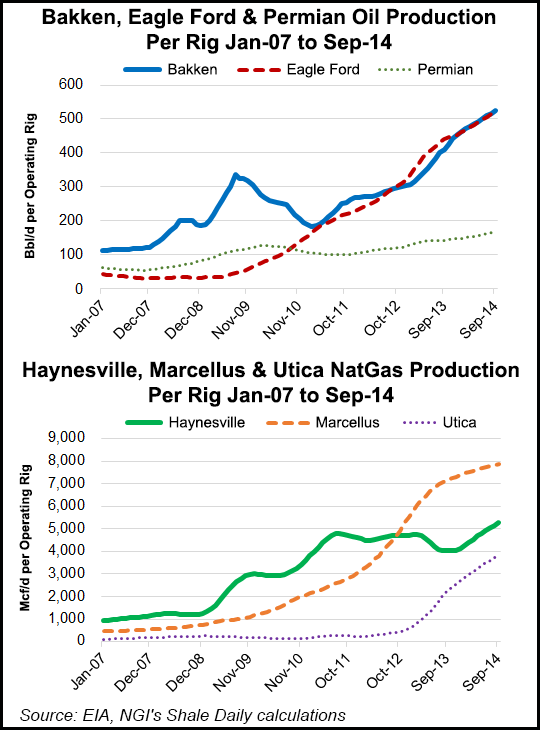 The Houston-based operator, the No. 1 hydraulic fracturing (fracking) provider in the United States, offered a staggering indication in its 3Q2014 results that North America’s land operators aren’t slowing down. From a year ago, there was a 30% increase in the average stage count per well and a 50% jump in sand consumption per well, Lesar told analysts during a conference call.

The North American “job board is sold out…We are delivering new stim [stimulation] equipment for incremental work with no negative impact on margins,” the CEO said.

“Service intensity continues to increase on the types of jobs we design, the amount of proppant, the amount of stages…There’s a bigger ramp up in more mature basins. That’s where we really get into hyper increase, in the existing wells,” more than the exploratory work in a few basins. “Activity levels are surging higher month over month…I called the turn two quarters ago. This quarter, we clearly accelerated out of the turn. We do not see the momentum slowing anytime soon…”

As well, Halliburton has made positive progress on pricing contract renewals and price recoveries in “key basins” that should begin to kick in during early 2015.

“Looking to 2015, I don’t see anything that changes the pace of increases…simply because we are making better wells” and Halliburton is using logistics to ensure it is able to deliver sand and various supplies where they are needed.

“The hot topic is proppant and sand logistics,” Lesar noted. There were some disruptions in the market early in the quarter, with work delays and deliveries, and Halliburton missed some jobs, as did some of its competitors. However, it’s since taken action to prevent more issues in the future.

“Increasing intensity provides a terrific opportunity for us,” said COO Jeff Miller. “We are expanding our infrastructure and transport capability,” increasing sand by 100% and doubling its rail fleet. Thirty new contract suppliers provide a “better footprint and an intense volume of work.”

A logistics center in Houston tracks the rail and trucking fleet in real time, which has resulted in a “sharp increase in efficiency,” and an integrated approach that differentiates the company.

Halliburton now is in the “heavy part” of its contract renewal period, Miller noted. “Renewals are rolling up, not down…Budgets are moving up, not down. The activity I see, everything is increasing into 2015…”

Total North American operating income in 3Q2014 was $906 million, up from $657 million in 3Q2013. Completion and production income in the United States and Canada totaled $765 million from $489 million, while drilling and evaluation income fell, impacted by Gulf of Mexico looping currents, to $141 million from $168 million.

“In North America, third quarter revenue increased 9% and operating income was up 15% compared to the second quarter of 2014, outperforming a 3% increase in the United States land rig count,” Lesar noted. “Service intensity levels surged to unprecedented levels, as completion volumes per well were up more than 50% compared to the third quarter of last year, and we expect this level of activity to continue.

“More importantly, our exit rate margins for North America were in excess of 20%.” The average margins over the third quarter in North America remained well above 19%, and the region should maintain the 20% edge through the end of the year, the CEO noted.

Also growing substantially was business in Latin America, where revenue increased 16% sequentially, while operating income more than doubled from the second quarter, primarily as a result of increased project management, consulting and software revenue in Mexico.

“Our strategy is working well and we intend to stay the course,” Lesar said. “Our leadership in North America positions us well to take advantage of this quickly evolving market, and we continue to realize significant revenue and margin expansion in our international business.”

Lesar addressed what has been on many people’s minds of late, the falling price of oil and its potential impact on drilling.

“We believe industry fundamentals suggest that these lower prices are not sustainable,” Lesar said. Supply and demand should be in balance in a “relatively short period of time.” The big producers, Halliburton’s mainstay customers, have given no indication they plan to slow down their work in North America, he told analysts. The comments echoed those made by executives with Schlumberger Ltd. and Baker Hughes Inc., which reported last week (see Shale Daily, Oct. 17; Oct. 16).

Overall North American revenues were up 9% sequentially, “well in excess of our 6% forecast,” noted Tudor, Pickering, Holt’s Jeff Tillery and Byron Pope. “Incrementals were inline with our expectation…but the top line grew much more than we’d anticipated…

“For 4Q2014, the push/pull on results will be the continuation of strong completions intensity, more frack capacity available due to newbuild deliveries versus seasonal holiday time…”

Halliburton also introduced new technology globally during the latest period. In the U.S. onshore, the wireline and perforating business line unveiled the CoreVault system, which provides a volumetric picture of the amount of oil and gas trapped in unconventional reservoir rocks. The system contains and brings the reservoir fluids within rock samples to the surface, allowing the volume of hydrocarbons in place to be measured. The system may allow for a better understanding of the potential production within a reservoir.