Designating natural gas as certified or “responsibly sourced” may do little to reduce its carbon intensity, but as U.S. and overseas customers question how their fuel is produced, the branding is growing in importance to ensure conformity and transparency, according to industry experts. 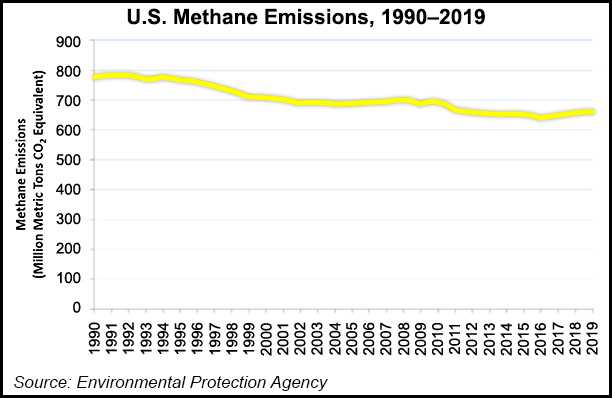 A conundrum of challenges is facing natural gas buyers today, as many are boosting their environmental, social and governance (ESG) credentials. Certified natural gas, which some groups label as responsibly sourced gas (RSG), has muscled its way into the industry lexicon fairly quickly, bringing with it opportunities but also questions.

At the LDC Gas Forums Midcontinent conference in Chicago, gas buying experts on Tuesday offered their take on how certified gas has upended the pricing game.

The RSG tag “raises the bar for the industry,” said Enbridge’s Nicole Brunner, a manager of Gas Supply for the Calgary-based conglomerate. “The certification is not necessarily lowering the carbon intensity, but it provides transparency. It raises the profile for ESG customers who are really more concerned with how and where gas is being sourced.”

Enbridge is using the Equitable Origin certification system, aka EO100, for its RSG. The EO100 designation allows certainty about where the gas is being produced, a plus in Canada to allow “adherence for Indigenous peoples’ rights,” Brunner said.

To earn the EO100 standard, conformity audits on operations are conducted by independent third parties. The system, undertaken at any point in an operation’s lifecycle, may be used for renewable and nonrenewable development, including exploration and production (E&P) sites.

“Our hope is that in negotiating these transactions as a large buyer, it can become more commonplace,” Brunner said. The sourcing tag is “supporting development” in how gas is purchased too. “We’ve started to get responses on whether the gas is EO100 certified or not.”
Brunner told the LDC audience, “if you’re interested in selling it, we’re interested in buying it.”

The EO standard is but one of several ways an operator can certify the gas supply.

Nonprofit MiQ, for example, does not use the “RSG” designation. Instead, MiQ certifies supplies using an A-F grading scale. To become certified, an upstream onshore or offshore facility must demonstrate performance across three criteria: methane intensity, company practices and methane detection technology deployment.

Another certification method is through Project Canary. The TrustWell system measures data points that certify the conditions under which gas is produced, delivered and consumed.

Among other things, Project Canary has found an in with U.S. liquefied natural gas (LNG) operators and buyers to certify gas, which can be a selling point for overseas buyers.

The number of North American E&Ps and LNG operators working to certify their supply is growing every month. Many buyers are willing to pay a premium for the designation.

Houston-based Southwestern Energy Co. in June became the nation’s first E&P to certify all of its gas in Appalachia. EQT Corp., the largest gas producer in the Lower 48, has partnerships with EO, MiQ and Project Canary to certify gas.

ExxonMobil recently partnered with MiQ to certify the gas produced at its Poker Lake, NM, facility in the Permian Basin. Haynesville Shale pure-play Vine Energy Inc. is working to certify its gas output through Project Canary. Chesapeake Energy Corp. launched a similar program earlier this year for some of its Marcellus Shale and Haynesville volumes. Seneca Resources Co. LLC plans to certify some of its Appalachia production too.

“What does it mean to be certified gas?” he asked. “Do we need the certification? My initial take is yes, because we need that third-party audit trail. I also think we don’t want to go out and say, ‘I’m going to pick this certification over that one.’ That’s not in my bailiwick…”

Schiffer said it makes sense for a company working in Canada, like Enbridge, to be able to demonstrate whether gas is produced or not produced from Indigenous land. “That’s very important in Ontario. I can see that being a very important component for them.”

For DTE gas supplies, though, Schiffer said there’s still “a lot to figure out…because of these summer adjustment things, greenhouse gases, water, land…We need to figure out what’s important to us, then work through the process.”

DTE delivers gas to 1.3 million customers across Michigan. Like other utilities, Schiffer said he’s looking for regulatory certainty to also ensure costs can be recovered to carry out the  programs.

For PBF, an oil refining company, ESG initiatives have not been “as big a factor for us yet,” said senior director Alan King. PBF owns and operates refineries and related assets in California, Delaware, Louisiana, New Jersey and Ohio. The facilities have a combined throughput of 1 million b/d-plus.

King helps to secure the gas used in the refining processes. He told the LDC audience that PBF doesn’t have the “brand presence” of an integrated like ExxonMobil or Royal Dutch Shell plc. ESG initiatives such as moving to net-zero carbon have not been undertaken — yet.

“But when I look at low-methane emission intensity, it seems like buying certified fair trade coffee,” King said. “If you see one thing comparably priced, see it’s certified unlike some of the organic labels, that could become the industry standard pretty soon.”

All North American energy companies are “operating under elevated responsibility levels,” King said. For PBF, moving into the lane to build its ESG credibility could be only “one board meeting away.”