Onshore drilling activity in the United States and Canada has begun to pick up, with excess pressure pumping capacity “being absorbed ever so slowly,” the top financial officer for Baker Hughes Inc. said this week. 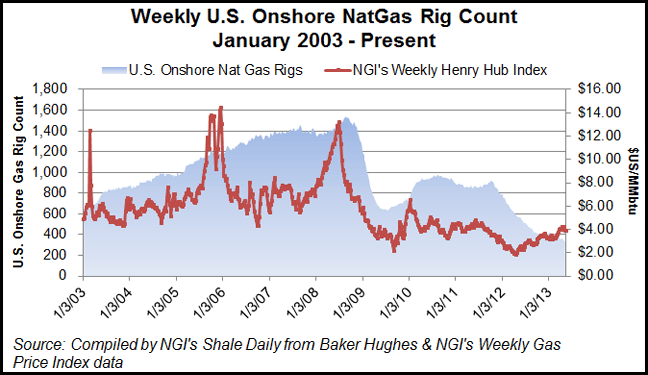 Oilfield services in North America haven’t recovered to the point before natural gas prices began to falter in 2008, but pressure pumping pricing “does not appear to be as severe as it has been in the last four quarters,” Baker CFO Peter Ragauss said Wednesday at the UBS Global Oil & Gas Conference in Austin, TX. “Just to put it bluntly, it seems to be flattening out, still down a little bit but flattening out.

“And I think what’s driving a lot of that is just activity levels are up overall. There are some days [when] we’re operating at pretty high utilization…If we can get that to seven days a week, that will be great. But at least we’ve got some days that are almost perfect days in terms of utilization…

“The number of stages is going up, the excess capacities are being absorbed ever so slowly. And we’ve got some players that look like they’re operating at breakeven cash margins and other players that are a little more efficient that are operating at higher margins. And so it feels like there’s a floor on this thing coming.”

A key objective “is to increase fleet utilization, namely by increasing the proportion of 24-hour work we are doing. We knew this transformation would be slow, and we still have work ahead of us. We began from a very low base. At around this time last year, only a small fraction of our fleet was doing 24-hour work…By the end of 2012, we had increased the percentage of 24-hour fleets to about 30%…Today, we have 45% of our fleets working 24 hours. Not surprisingly, we’ve seen a meaningful increase in stages compared to last quarter and compared to last year…We still have excess capacity and room to improve, more room to improve the amount of 24-hour work we are doing.”

Baker’s stated goal this year is to improve the 24-hour operations to 50%-plus, Investor Relations chief Trey Clark told the audience. “We have a greater degree of confidence that we should meet or exceed that target. But…it’s a slow grind upwards. It’s about establishing relationship with these customers, targeting contracts when they roll off; it’s a lumpy ride.”

It’s a matter of having the “customers and the contracts willing to do 24 hours…logistics on both sides,” added Ragauss. But a system in constant motion is a “powerful tool…We were basically doing as many stages in a given week as we did last year with 15% fewer people. And the reason why we did that was there’s a lot of efficiency quoted with the 24-hour operations, a big difference.”

Halliburton Co. CFO Mark McCollum, who spoke to the UBS audience on Tuesday, said things were reaching an equilibrium in North America after hitting a low point in 2012. The operator this year expects to add 100-150 rigs in North America, he said.

The operator has been on the rebound also from an oversupply of onshore pressure pumping equipment. The company declared that its bottom for North American margins came at the end of 2012 (see Shale Daily, April 23).

“For us, we felt confident that we could do that because we had a fairly significant hole in our margins relative to commodity costs for guar gum that we’ve been working out of our inventory this year,” McCollum told analysts. Guar gum, which is used in hydraulic fracturing stimulation chemicals, mostly is manufactured in India, and Halliburton made a costly purchase before the bottom fell out of the market two years ago.

Even though the “overall” rig count in the United States was “fairly anemic” from January through March, “when you looked inside the numbers, the increase in horizontal rigs, as well as the increase in the rig allocation to our particular customer set, indicated that there was some opportunity there. And so we got some uplift in our margins…We expect that that will continue over the rest of the year.”

There are still some oilfield services pricing pressures in the U.S. markets, said McCollum. “We had some pricing degradation, particularly in pressure pumping in 1Q2013; there will be some in 2Q2013 as well. We think as we go through the rest of the year that it will begin to abate, but it’s going to be a factor of what happens with excess capacity in the market and how quickly can that excess capacity be absorbed.”

Well efficiency, however, “is gaining dramatically,” he said. “We saw about a 15% increase in well efficiency just last year. When we look at this year, we’re continuing to see it…For us, combined with a modest increase in the rig count and the fact that our competitors as well as us are not adding net capacity to the market, we believe by the time that we exit 2013 we will be maybe not quite at imbalance but very, very close to an imbalance and at least close enough so that the pricing pressure itself in the marketplace has essentially abated, particularly relative to the largest competitors in the space.”