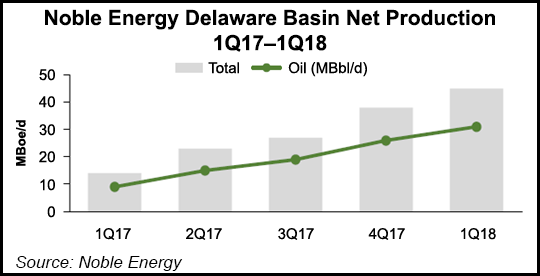 The Houston-based independent invested $671 million in its upstream operations during 1Q2018, with about 75% deployed to the U.S. onshore plays.

“Noble is off to a fast start in 2018, building on our successes in 2017,” said CEO Dave Stover. “Our core positions in the U.S. onshore business provide a great foundation for high-return, high-margin growth,” while the Leviathan natural gas development offshore Israel continues to progress.

In the Delaware, volumes climbed 85% year/year to 45,000 boe/d, weighted 69% to oil. Thirteen wells came online, all on multi-well pads. Most of the wells were landed within the Wolfcamp A Upper and Lower zones as well as one well in the Third Bone Spring and one in the Wolfcamp C.

Noble also expanded its produced water management program in the Permian, with nearly 10% of water used in completions being recycled produced water.

In late March, the third central gathering facility (CGF) was completed in the Delaware operated by majority owned Noble Midstream LP. The facility represents the first CGF in the southern portion of the Delaware acreage. Operations from the fourth CGF ramped in late April, with one additional CGF expected to be online by the end of June.

In the Denver-Julesburg (DJ) Basin of Colorado, production increased 7% year/year to average 111,000 boe/d, with the oil mix increasing to a record of 56%. Volumes were driven by continued strong well performance in the Wells Ranch and East Pony areas, with 31 wells brought online.

Sales volumes from the Eagle Ford Shale totaled 81,000 boe/d, with about 3,000 boe/d impacted by facility downtime. Activity focused on well completions that are expected online in 2Q2018.

Development of the Leviathan project is about 45% complete and construction of the production platform is progressing, management noted. First gas sales are anticipated by the end of 2019.

Since the end of 2017, the company has executed several natural gas contracts with customers in Egypt and Israel, “bringing total volumes under contract for Leviathan to over 900 MMcf/d,” management said. “Included in this amount is a new agreement with an existing customer to provide approximately 40 MMcf/d beginning in the second quarter 2018 from Tamar, which will then transfer to Leviathan upon field start-up.”

Operations chief Gary Willingham took some time during the call to discuss U.S. onshore marketing efforts, particularly Permian takeaway, which has become a big focus as pipeline capacity has tightened in the Delaware and Midland sub-basins.

“Across our key operating areas in the DJ Basin, the Eagle Ford and the Delaware, we have multiple crude outlets,” Willingham said. “For 2018, the March majority of our crude is priced at Cushing, mainly from our DJ Basin production. Our Permian crude is primarily sold in basin to customers with firm takeaway capacity.

“In addition, we’ve opportunistically locked in near-term Midland basin hedges, resulting in less than 20% of our total 2018 U.S. onshore oil subject to Midland pricing. As our Delaware oil production grows over time, more and more of our volumes will be priced along the Gulf Coast…”

Noble is finalizing agreements for long-term firm transportation from the Permian via a system by Epic Y Grade Pipeline LP. Last fall Epic inked an agreement with a BP plc unit to anchor the 650-mile, natural gas liquids (NGL) pipeline with capacity of at least 220,000 b/d. The pipe, scheduled to be online in the second half of 2019, would link producer reserves in the Permian and Eagle Ford to Texas Gulf Coast refiners, petrochemical companies and export markets.

“Along with providing flow assurance,” Willingham said, the agreements with Epic “will secure access to premium-priced markets with refining and export opportunities at an attractive transportation rate.

“In addition, our long-term arrangements for gas and NGLs in the Permian provide firm sales to parties with significant takeaway capacity. Ultimately, we feel secure, both in our ability to get our volumes to market and to maximize value.”

For the second quarter, Noble expects organic capital expenditures (capex) of $750-850 million, with the majority to be spent in the DJ and Delaware basins and to progress Leviathan development. Sales volumes for the second quarter are expected to average 340,000-350,000 boe/d.

Noble has revised its full-year 2018 guidance to reflect higher volumes, as well as the sale of the Gulf of Mexico business, which was completed in April. Volumes have been increased by about 9,000 boe/d, of which 4,000 b/d are NGLs and the remainder natural gas, all primarily in the DJ related to percent of proceed contracts, said Stover.